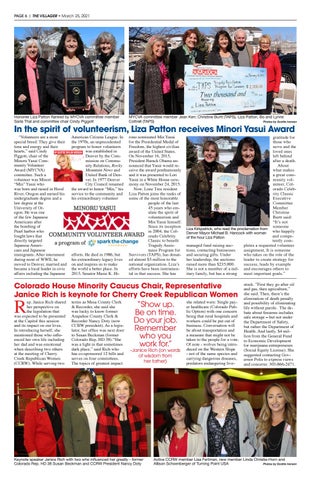 “Volunteers are a most special breed. They give their time and energy and their hearts,” said Cindy Piggott, chair of the Minoru Yasui Community Volunteer Award (MYCVA) committee. Such a volunteer was Minori “Min” Yasui who was born and raised in Hood River, Oregon and earned his undergraduate degree and a law degree at the University of Oregon. He was one of the few Japanese Americans after the bombing of Pearl harbor who fought laws that directly targeted Japanese Americans and Japanese immigrants. After internment during most of WWII, he moved to Denver, married and became a local leader in civic affairs including the Japanese

rono nominated Min Yasui for the Presidential Medal of Freedom, the highest civilian award of the United States. On November 16, 2015, President Barack Obama announced that Yasui would receive the award posthumously and it was presented to Lori Yasui in a White House ceremony on November 24, 2015. Now, Lone Tree resident Liza Patton joins the ranks of some of the most honorable people of the last 45 years who emulate the spirit of volunteerism and Min Yasui himself. Since its inception in 2004, the Colorado Celebrity Classic to benefit Tragedy Assistance Program for Survivors (TAPS), has donated almost $5 million to the national organization. Liza’s efforts have been instrumental in that success. She has

In the spirit of volunteerism, Liza Patton receives Minori Yasui Award American Citizens League. In the 1970s, an unprecedented program to honor volunteers was established in Denver by the Commission on Community Relations, Rocky Mountain News and United Bank of Denver. In 1977 Denver City Council renamed the award to honor “Min,” his service to the community and his extraordinary volunteer

efforts. He died in 1986, but his extraordinary legacy lives on and inspires us to make the world a better place. In 2015, Senator Mazie K. Hi-

gratitude for those who serve and the loved ones left behind after a death. About what makes a great community volunteer, Colorado Celebrity Classic Executive Committee Member Christine Burtt said: “It’s not someone Liza Kirkpatrick, who read the proclamation from who happily Denver Mayor Michael B. Hancock with woman and compeof the hour Liza Patton tently completes a requested volunteer managed fund raising aucassignment, It is someone tions, contacting businesses who takes on the role of the and securing gifts. Under leader to create strategy for her leadership, the auctions success, leads by example raised more than $235,000. She is not a member of a mil- and encourages others to meet important goals.” itary family, but has a strong

ep. Janice Rich shared her perspective on the legislation that was expected to be presented at the Capitol this session and its impact on our lives. In introducing herself, she mentioned those who influenced her own life including her dad and was emotional when describing two others at the meeting of Cherry Creek Republican Women (CCRW). While serving two

terms as Mesa County Clerk & Recorder, she said she was lucky to know former Arapahoe County Clerk & Recorder Nancy Doty (now CCRW president). As a legislator, her office was next door to Susan Beckman (former Colorado Rep. HD 38).“She was a light in that sometimes dark place,” said Rich who has co-sponsored 12 bills and serves on four committees. The topics of greatest impact

“Show up. Be on time. Do your job. Remember who you work for.”

-Janice Rich (on words of wisdom from her father)

she related were: Single payer healthcare (Colorado Public Option) with one concern being that rural hospitals and workers could be put out of business. Conversation will be about transportation and a measure that might not be taken to the people for a vote. Of note - wolves being introduced on the Western Slope - not of the same species and carrying dangerous diseases, predators endangering live-

stock. ”First they go after oil and gas, then agriculture,” she said. Then, there’s the elimination of death penalty and possibility of eliminating life without parole. The debate about firearms includes safe storage – but not under the Department of Safety, but rather the Department of Health. And lastly, $4 million from the General Fund to Economic Development for marijuana entrepreneurs (Social Equity License). She suggested contacting Governor Polis to express views and concerns: 303-866-2471. 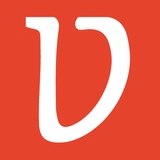