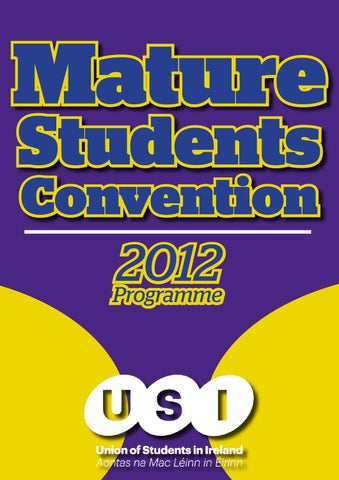 USI is the national representative body for over 250,000 students in third level education in Ireland. We are a membership organisation – our members are our affiliated Students’ Unions around Ireland, North and South. USI fights to protect and strives to enhance the student experience.

I am delighted to welcome you to USI’s Mature Students Convention 2012. The path of a mature student is often one lined with obstacles. While we have seen a huge increase in the number of mature students participating in higher education, for many the barriers to full participation are still too great. Since Budget 2011, over 7000 mature students, having automatically received the non-adjacent rate of the grant in recognition of the substantially higher cost of living for those supporting children, partners or elderly parents, had their grant cut by 60%. Many of these students, of which you may be one, are facing daily struggles to continue in higher education. While the Government continue to talk about a society of lifelong learners, they continue to cut vital funding, jeopardising Ireland’s growing reputation as a place open to and encouraging of lifelong learning. USI will continue to fight on your behalf to ensure that your path through education allows you to reach your full potential, not only for your benefit but the good of the country. I wish to thank Maynooth Students’ Union for hosting this convention and I look forward to speaking to you all in person over the course of today. Beir bua, John

A chara, As USI’s Vice President for Equality and Citizenship, it was my pleasure to organise today’s convention. I represent you on a national level and am really looking forward to speaking with you all today and learning more about your experiences as a mature student in third-level. Following on from the Mature Students’ Conference that was organised earlier this year, we were given a mandate from our members at our last national USI Congress to hold a mature students’ event in the first semester of the academic year to facilitate networking and ideas sharing opportunities early on in the year between mature students and mature students’ societies. I would like to take this opportunity to thank Maynooth Students’ Union for their help in the organisation of today’s event. I would also like to thank all speakers who have come to Maynooth today to share their expertise and experience with us. Beir bua, Laura

Nigel is the Community Engagement Officer with the Inspire Ireland Foundation. Inspire Ireland is one of a network of international charitable organisations that work, through technology, to help people through tough times. Nigel is experienced at providing training and facilitating workshops on understanding and minding your mental health. He has a BSc in Mathematical Sciences.

Biography: Paddy is a qualified accountant and has been working in MABS in Newbridge in Kildare for over ten years. MABS works with clients by supporting them in drawing up realistic budgets and maximising their incomes. MABS also supports clients in dealing with their debts according to their budgets. MABS are a national service with over 60 offices nationwide.

Biography: Mark is based in the School of Education in Trinity College Dublin. ‘A Study of Mature Students in Irish Higher Education 2012-2013’ is his research project as part of his PhD and this represents his fourth engagement with higher education as a mature student. He completed his initial degree and teacher-training in the UK specialising in adult, further and higher education in the 1990s where he worked as a teacher-trainer in formal, and non-formal, education settings. He returned to Ireland in 2001 where he has worked in communitybased and adult educations for the past ten years, only interrupting this to return to complete his Masters in Education at TCD full-time in 2005. In 2011, Mark was teaching in Ballymun helping older learners to return to education prompting an awareness of the paucity of research in this area. Mark hopes that his innovative research project will add in some way to understanding why an increasing number of mature students are entering higher education and how they experience this unique journey.

Biography: Sandra is a 4th year Sociology and Social Policy Undergraduate at TCD. She left school after the junior cert, trained as a hairdresser and eventually set up her own salon. She subsequently spent six years working in the homeless and addiction services. Having completed a Diploma in Addiction Studies, at the age of 40, she fulfilled a lifelong ambition to undertake a third level degree. She is the first to admit to the enormous challenges facing mature students today. She is a lone parent of a 14 year old boy and is well aware of the difficulties of juggling parenthood, academia and work. She also works hard at overcoming the added challenge of having dyslexia and dyspraxia. Despite the daily battles, she does not regret the decision to go to college and thrives on the intellectual stimulation and sense of achievement she has gained. She is currently the Chairperson of the DU Mature Student Society for the 2nd year running. She has worked hard in that capacity to increase membership – which has now doubled for the second year in a row. According to Sandra, the focus of the mature student society is to provide mature students with advice and support, and of course, a bit of craic through the various social events organised both on and off campus.

Equality Policy The Union of Students in Ireland has always been a force for the recognition and realisation of equality in Ireland. The latest policy on equality, adopted in 2012, reinforces this commitment.

opportunities policies and procedures as an employer and service provider in order to combat discrimination and value diversity. The Union of Students in Ireland will not tolerate discrimination based on gender, civil status, family status, age, disability, sexual orientation, race, religion, membership of the Traveller community, gender expression, gender identity, country of origin, socio-economic background. The first nine grounds are those specifically mentioned by the Equality Acts but discrimination can occur also on other characteristics. The Union of Students in Ireland reserves the right to add to these groups at any time. 3. Taking Action:

This will be done through: • Publication and dissemination of the policy, • Display of this policy on the USI website and in public areas of the organisation, • Reference to the policy in business contracts, • Reference to the policy in information and training materials All staff employed should cooperate with the development and implementation of policies, procedures and practices to eliminate discrimination, accommodate diversity and promote equality for students. This requirement will be included in contracts of employment for all staff. Training will be made available to all of USI Officer Board and staff in relation to the Equality Acts (Equal Status Acts 2000 to 2011 &amp; Employment Equality Acts 1998 – 2011). The President of the Union of Students in Ireland and all of USI Officer Board have responsibility for upholding and implementing this policy. This policy will be reviewed at the end of each academic year by USI Officer Board and any changes will be subject to approval by USI National Council.

This is the official programme for USI's Mature Students Convention 2012. It includes the timetable for the day, with details of the talks and speakers. 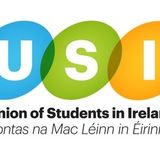