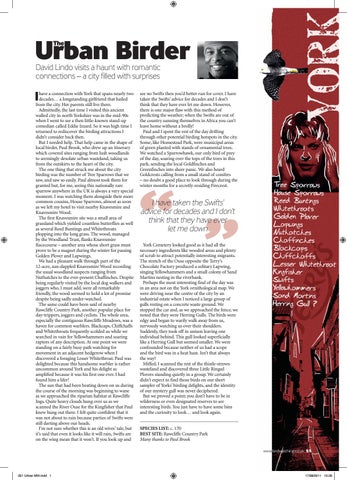 have a connection with York that spans nearly two decades… a longstanding girlfriend that hailed from the city. Her parents still live there. Admittedly, the last time I visited this ancient walled city in north Yorkshire was in the mid-90s when I went to see a then little-known stand-up comedian called Eddie Izzard. So it was high time I returned to rediscover the birding attractions I didn’t consider back then. But I needed help. That help came in the shape of local birder, Paul Brook, who drew up an itinerary which covered sites ranging from lush woodlands to seemingly desolate urban wasteland, taking us from the outskirts to the heart of the city. The one thing that struck me about the city birding was the number of Tree Sparrows that we saw, and saw so easily. Paul almost took them for granted but, for me, seeing this nationally rare sparrow anywhere in the UK is always a very special moment. I was watching them alongside their more common cousins, House Sparrows, almost as soon as we left my hotel to visit nearby Knavesmire and Knavesmire Wood. The first Knavesmire site was a small area of grassland which yielded countless butterflies as well as several Reed Buntings and Whitethroats plopping into the long grass. The wood, managed by the Woodland Trust, flanks Knavesmire Racecourse – another area whose short grass must prove to be a magnet during the winter for passing Golden Plover and Lapwings. We had a pleasant walk through part of the 12-acre, sun-dappled Knavesmire Wood recording the usual woodland suspects ranging from Nuthatches to the ever-present Chaffinches. Despite being regularly visited by the local dog walkers and joggers who, I must add, were all remarkably friendly, the wood seemed to hold a lot of promise despite being sadly under-watched. The same could have been said of nearby Rawcliffe Country Park, another popular place for day-trippers, joggers and cyclists. The whole area, especially the contiguous Rawcliffe Meadows, was a haven for common warblers. Blackcaps, Chiffchaffs and Whitethroats frequently scolded us while we searched in vain for Yellowhammers and soaring raptors of any description. At one point we were standing on a fairly busy path watching for movement in an adjacent hedgerow when I discovered a foraging Lesser Whitethroat. Paul was delighted because this handsome warbler is rather uncommon around York and his delight as amplified because it was his first one ever. I had found him a lifer! The sun that had been beating down on us during the course of the morning was beginning to wane as we approached the riparian habitat at Rawcliffe Ings. Quite heavy clouds hung over us as we scanned the River Ouse for the Kingfisher that Paul knew hung out there. I felt quite confident that it was not about to rain because parties of Swifts were still darting above our heads. I’m not sure whether this is an old wives’ tale, but it’s said that even it looks like it will rain, Swifts are on the wing mean that it won’t. If you look up and

see no Swifts then you’d better run for cover. I have taken the Swifts’ advice for decades and I don’t think that they have ever let me down. However, there is one major flaw with this method of predicting the weather; when the Swifts are out of the country sunning themselves in Africa you can’t leave home without a brolly! Paul and I spent the rest of the day drifting through other potential birding hotspots in the city. Some, like Homestead Park, were municipal areas of green planted with stands of ornamental trees. We watched a Sparrowhawk, our only bird of prey of the day, soaring over the tops of the trees in this park, sending the local Goldfinches and Greenfinches into sheer panic. We also heard Goldcrests calling from a small stand of conifers – no doubt a good place to look through during the winter months for a secretly-residing Firecrest.

I have taken the Swifts’ advice for decades and I don’t think that they have ever let me down York Cemetery looked good as it had all the necessary ingredients like wooded areas and plenty of scrub to attract potentially interesting migrants. The stretch of the Ouse opposite the Terry’s Chocolate Factory produced a solitary Lapwing, singing Yellowhammers and a small colony of Sand Martins nesting in the riverbank. Perhaps the most interesting find of the day was in an area not on the York ornithological map. We were driving near the centre of the city by an industrial estate when I noticed a large group of gulls resting on a concrete waste ground. We stopped the car and, as we approached the fence, we noted that they were Herring Gulls. The birds were edgy and began to warily walk away from us, nervously watching us over their shoulders. Suddenly, they took off in unison leaving one individual behind. This gull looked superficially like a Herring Gull but seemed smaller. We were confounded because neither of us had a scope and the bird was in a heat haze. Isn’t that always the way? Miffed, I scanned the rest of the thistle-strewn wasteland and discovered three Little Ringed Plovers standing quietly in a group. We certainly didn’t expect to find those birds on our short sampler of Yorks’ birding delights, and the identity of our mystery gull was never deciphered. But we proved a point; you don’t have to be in wilderness or even designated reserves to see interesting birds. You just have to have some bins and the curiosity to look… and look again. SPECIES LIST: c. 170 BEST SITE: Rawcliffe Country Park Many thanks to Paul Brook www.birdwatching.co.uk 51