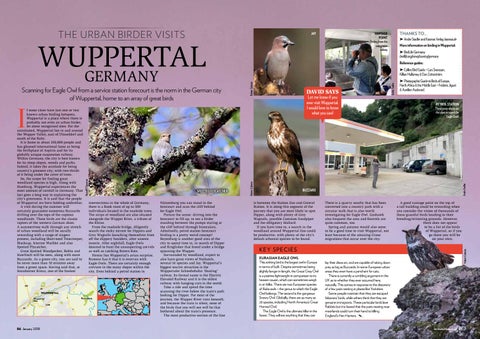 BUZZARD is between the Station Zoo and Central Station. It is along this segment of the journey that you are most likely to spot Dipper, along with plenty of Grey Wagtails, possible Common Sandpiper and the obligatory Mallard. If you have time to, a search in the woodland around Wuppertal Zoo could be productive, with plenty of the city’s default arboreal species to be found.

There is a quarry nearby that has been converted into a country park with a circular walk that is also worth investigating for Eagle Owl. Goshawk also frequent the area and Kestrels are quite common, too. Spring and autumn would also seem to be a good time to visit Wuppertal, not least because of the amazing Crane migrations that occur over the city.

A good vantage point on the top of a tall building could be rewarding when you consider the vision of thousands of these graceful birds heading to their breeding/wintering grounds. However, there does not appear to be a list of the birds of Wuppertal, so if you go there you will be on your own.

KE Y SPECIE S EURASIAN EAGLE OWL This striking bird is the largest owl in Europe in terms of bulk. Despite sometimes being slightly longer in length, the Great Grey Owl is a positive lightweight in comparison to its heavier cousin, which can sometimes weigh in at 10lbs. There are two European species of Bubo owls – the genus to which the Eagle Owl belongs. The second is the gorgeous Snowy Owl. Globally, there are as many as 20 species, including North America’s Great Horned Owl. The Eagle Owl is the ultimate killer in the forest. They will eat anything that they can

lay their claws on, and are capable of taking down prey as big as Buzzards. In some European urban areas they even have a penchant for cats. There is currently a rumbling argument in the UK as to whether they ever occurred here, naturally. This comes in response to the discovery of a few pairs nesting in places like Yorkshire. Some people maintain that they are escaped falconers’ birds, while others think that they are genuine immigrants. These particular birds love Rabbits but it is feared that the pairs nesting near moorlands could turn their hand to killing England’s Hen Harriers.

Nützenburg you can stand in the forecourt and scan the cliff behind for Eagle Owl. Picture the scene: driving into the forecourt to fill up, to see a birder standing between the pumps staring at the cliff behind through binoculars. Admittedly, petrol station forecourt birding is a pretty weird concept! Beyenburg is another good area of the city to spend time in, in search of Dipper and Kingfisher that breed under a bridge spanning the Wupper. Surrounded by woodland, expect to also have great views of Nuthatch, several tit species and Jay. Wuppertal’s biggest tourist attraction is the Wuppertaler Schwebebahn ‘floating’ railway. Its formal name is the Electric Elevated Railway and it is the oldest railway with hanging cars in the world. Take a ride and spend the time scanning the river below the train’s path looking for Dipper. For most of the journey, the Wupper River runs beneath, and because the train is silent, none of the birds that you will see will be that bothered about the train’s presence. The most productive section of the line

PETROL STATION These steep slopes are the place to search for Eagle Owls!

intersections in the whole of Germany, there is a Rook roost of up to 500 individuals located in the roadside trees. The strips of woodland are also situated alongside the Wupper River, a tribute of the Rhine. From the roadside bridge, diligently search the rocky torrent for Dippers and Grey Wagtails launching themselves from off the slippery boulders, after unseen insects. After nightfall, Eagle Owls descend to hunt the unsuspecting corvids as well as catching Brown Rats. Herein lies Wuppertal’s avian surprise. Rumour has it that it is overrun with Eagle Owls. There are certainly enough crevices in the many slopes within the city. Even behind a petrol station in

Let me know if you ever visit Wuppertal. I would love to know what you saw!

f some cities have just one or two known urban birding hotspots, Wuppertal is a place where there is probably not even an urban birder, let alone recognised sites. For the uninitiated, Wuppertal lies in and around the Wupper Valley, east of Düsseldorf and south of the Ruhr. It is home to about 350,000 people and has gleaned international fame as being the birthplace of Aspirin and for its globally unique suspension railway. Within Germany, the city is best known for its steep slopes, woods and parks. Indeed, it takes the accolade for being country’s greenest city, with two-thirds of it being under the cover of trees. So, the scope for finding great woodland species is high. Along with Hamburg, Wuppertal experiences the most amount of rainfall in Germany. That fact goes a long way to explaining the city’s greenness. It is said that the people of Wuppertal are born holding umbrellas. A visit during the summer will certainly guarantee numerous Buzzards drifting over the tops of the copious woodlands. These birds are the classic raptors of the western German skies. A summertime walk through any stretch of urban woodland will be aurally rewarding with a range of singers present, including Short-toed Treecreeper, Blackcap, Icterine Warbler and also Spotted Flycatcher. Great Spotted Woodpecker, Robin and Hawfinch will be seen, along with more Buzzards. As a green city, you are said to be never more than 10 minutes away from a green space. Having said that, at Sonnborner Kreuz, one of the busiest

Scanning for Eagle Owl from a service station forecourt is the norm in the German city of Wuppertal, home to an array of great birds