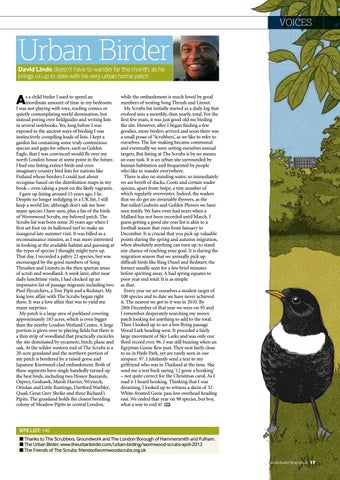 Urban Birder David Lindo doesn’t have to wander far this month, as he brings us up to date with his very urban home patch

s a child birder I used to spend an inordinate amount of time in my bedroom. I was not playing with toys, reading comics or quietly contemplating world domination, but instead poring over fieldguides and writing lists in several notebooks. Yes, long before I was exposed to the ancient ways of birding I was instinctively compiling loads of lists. I kept a garden list containing some truly contentious species and gaps for others, such as Golden Eagle, that I was convinced would fly over my north London house at some point in the future. I had one listing extinct birds and even imaginary country bird lists for nations like Finland whose borders I could just about recognise based on the distribution maps in my book – even taking a punt on the likely vagrants. I gave up listing around 15 years ago. I lie. Despite no longer indulging in a UK list, I still keep a world list, although don’t ask me how many species I have seen, plus a list of the birds of Wormwood Scrubs, my beloved patch. The Scrubs list was born some 20 years ago when I first set foot on its hallowed turf to make an inaugural late summer visit. It was billed as a reconnaissance mission, as I was more interested in looking at the available habitat and guessing at the types of species I thought might turn up. That day, I recorded a paltry 22 species, but was encouraged by the good numbers of Song Thrushes and Linnets in the then spartan areas of scrub and woodland. A week later, after near daily lunchtime visits, I had clocked up an impressive list of passage migrants including two Pied Flycatchers, a Tree Pipit and a Redstart. My long love affair with The Scrubs began right there. It was a love affair that was to yield me many surprises. My patch is a large area of parkland covering approximately 183 acres, which is even bigger than the nearby London Wetland Centre. A large portion is given over to playing fields but there is a thin strip of woodland that practically encircles the site dominated by sycamore, birch, plane and oak. At the wilder western end of The Scrubs is a 20-acre grassland and the northern portion of my patch is bordered by a raised gorse and Japanese Knotweed-clad embankment. Both of these segments have single handedly turned up the best birds, including two Honey Buzzards, Osprey, Goshawk, Marsh Harrier, Wryneck, Ortolan and Little Buntings, Dartford Warbler, Quail, Great Grey Shrike and three Richard’s Pipits. The grassland holds the closest breeding colony of Meadow Pipits to central London,

while the embankment is much loved by good numbers of nesting Song Thrush and Linnet. My Scrubs list initially started as a daily log that evolved into a monthly, then yearly, total. For the first few years, it was just good old me birding the site. However, after I began finding a few goodies, more birders arrived and soon there was a small posse of ‘Scrubbers’, as we like to refer to ourselves. The list-making became communal and eventually we were setting ourselves annual targets. But listing at The Scrubs is by no means an easy task. It is an urban site surrounded by human habitation and frequented by people who like to wander everywhere. There is also no standing water, so immediately we are bereft of ducks, Coots and certain wader species, apart from Snipe, a tiny number of which regularly overwinter. Indeed, the waders that we do get are invariably flyovers, as the Bar-tailed Godwits and Golden Plovers we have seen testify. We have even had years when a Mallard has not been recorded until March. I guess getting a good site year list is akin to a football season that runs from January to December. It is crucial that you pick up valuable points during the spring and autumn migration, when absolutely anything can turn up, to stand any chance of reaching your goal. It is during the migration season that we annually pick up difficult birds like Ring Ouzel and Redstart; the former usually seen for a few brief minutes before spiriting away. A bad spring equates to poor year end total. It is as simple as that. Every year we set ourselves a modest target of 100 species and to date we have never achieved it. The nearest we got to it was in 2010. By 28th December of that year we were on 95 and I remember desperately searching my snowy patch looking for anything to add to the total. Then I looked up to see a low flying passage Wood Lark heading west. It preceded a fairly large movement of Sky Larks and was only our third record ever. 96. I was still buzzing when an Egyptian Goose flew past. They nest fairly close to us in Hyde Park, yet are rarely seen in our airspace. 97. I jubilantly send a text to my girlfriend who was in Thailand at the time. She send me a text back saying ‘12 geese a honking’ – not quite correct for the Christmas carol. As I read it I heard honking. Thinking that I was dreaming, I looked up to witness a skein of 32 White-fronted Geese pass low overhead heading east. We ended that year on 98 species, but boy, what a way to end it!

Site LIST: 140 ■ Thanks to The Scrubbers, Groundwork and The London Borough of Hammersmith and Fulham. ■ The Urban Birder: www.theurbanbirder.com/urban-birding/wormwood-scrubs-april-2012 ■ The Friends of The Scrubs: friendsofwormwoodscrubs.org.uk www.birdwatching.co.uk 17