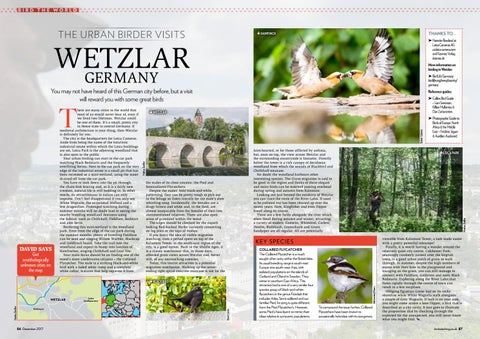 You may not have heard of this German city before, but a visit will reward you with some great birds

Get ornithologically unknown cities on the map

the males of its close cousins: the Pied and Semicollared Flycatchers. Despite the males’ bold black-and-white patterning, they can be pretty tough to pick out in the foliage so listen intently for the male’s slow whistling song. Incidentally, the females are a dingy brown and white and, in the field, are almost inseparable from the females of their two aforementioned relatives. There are also open areas of grassland within the wood. The edges should be checked for the superb looking Red-backed Shrike variously consorting on log piles or the tops of bushes. If you fancy the idea of visible migration watching, then a period spent on top of the Kalsmunt Tower, in the south-east region of the city, is a good option. Built in the Middle Ages, it is a classic watchtower that, in those days, afforded great views across Wetzlar and, better still, of any encroaching enemies. Today, this tourist attraction is a potential migration watchpoint. Walking up the neverending tight spiral concrete staircase is not for the

KE Y SPECIE S COLLARED FLYCATCHER The Collared Flycatcher is a much sought-after rarity within the British Isles. Its usual breeding range is south-east Europe into south-west Asia, with isolated populations on the islands of Gotland and Öland in Sweden. They winter in southern East Africa. This attractive bird is one of a very similar four species group of black-and-white flycatchers in the genus Ficedula that includes Atlas, Semi-collared and our familiar Pied. Its song is quite different from the Pied Flycatcher’s. However, some Pied’s have learnt to mimic their close relative in sympatric populations.

faint-hearted, or for those afflicted by asthma, but, once on top, the view across Wetzlar and the surrounding countryside is fantastic. Directly below the tower is a rich canopy of deciduous woodland from which the sounds of Blackbird and Chiffchaff emanate. No doubt the woodland harbours other interesting species. The Crane migration is said to be good in the region and flocks of these elegant and noisy birds can be watched passing overhead during spring and autumn from Kalsmunt. Looking out just beyond the outskirts of Wetzlar you can trace the route of the River Lahn. It used to be polluted but has been cleaned up over the recent years. Now, Kingfisher and even Dipper breed along its course. There are a few fields alongside the river which often flood during autumn and winter, attracting a variety of waders. Godwits, Whimbrel, Curlew, Dunlin, Redshank, Greenshank and Green Sandpiper are all regular. All are potentially

here are many cities in the world that most of us would never hear of, even if we lived two lifetimes. Wetzlar could be one of them. It’s a small, pretty city in Hesse state in central Germany. If medieval architecture is your thing, then Wetzlar is definitely for you. The city is the headquarters for Leica Cameras. Aside from being the name of the futuristic industrial estate within which the Leica buildings are set, Leica Park is the adjoining woodland that is also open to the public. Your urban birding can start in the car park watching Black Redstarts and the frequently overflying Serins. Next to the car park on the very edge of the industrial estate is a small pit that has been recreated as a mini-wetland, using the water drained off from the car park. You have to look down into the pit through the chain-link fencing and, as it is a fairly new creation, natural life is still bedding in. In other words, its attractiveness to nature can only improve. Don’t feel disappointed if you only see White Wagtails, the occasional Mallard and a few dragonflies. Prolonged watching during summer months will no doubt lead to seeing the nearby breeding woodland denizens using the habitat, such as Chiffchaff, Fieldfare, Redstart and also Serin. Bordering this mini-wetland is the woodland park. Even from the edge of the car park during the summer months, plenty of breeding Fieldfare can be seen and singing Willow Warbler, Blackcap and Goldfinch heard. Take the trail into the woodland and expect to bump into families of Hawfinches, singing Chiffchaff and Coal Tits. Your main focus should be on finding one of the wood’s more unobtrusive citizens – the Collared Flycatcher. The male is a striking black-and-white bird with a faded white rump and a complete white collar; features that help separate it from

To compound the issue further, Collared Flycatchers have been known to occasionally hybridize with its congeners.

viewable from Kalsmunt Tower, a task made easier with a pretty powerful telescope! Finally, it is worth having a wander around the relatively quiet city centre. Colchester Park, seemingly randomly named after the English town, is a good urban patch of green to walk through. In summer, despite the high numbers of mums with their kids in the playground and lounging on the grass, you can still manage to connect with Fieldfare, Goldcrest and more Black Redstarts. Exploring along the River Lahn that flows rapidly through the centre of town can result in a few surprises. Obliging Egyptian Geese loaf on its rocky shoreline while White Wagtails stalk alongside a couple of Grey Wagtails. If luck is on your side, you might come across a lone Dipper, a bird that is described as a city rarity. It just goes to illustrate the proposition that by checking through the expected for the unexpected, you will never know what you might find. birdwatching.co.uk 87