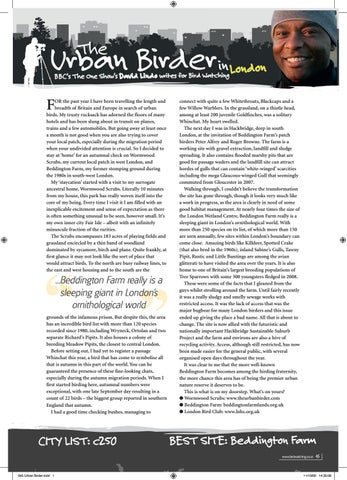 OR the past year I have been travelling the length and breadth of Britain and Europe in search of urban birds. My trusty rucksack has adorned the floors of many hotels and has been slung about in transit on planes, trains and a few automobiles. But going away at least once a month is not good when you are also trying to cover your local patch, especially during the migration period when your undivided attention is crucial. So I decided to stay at ‘home’ for an autumnal check on Wormwood Scrubs, my current local patch in west London, and Beddington Farm, my former stomping ground during the 1980s in south-west London. My ‘staycation’ started with a visit to my surrogate ancestral home, Wormwood Scrubs. Literally 10 minutes from my house, this park has really woven itself into the core of my being. Every time I visit it I am filled with an inexplicable excitement and sense of expectation as there is often something unusual to be seen, however small. It’s my own inner city Fair Isle – albeit with an infinitely minuscule fraction of the rarities. The Scrubs encompasses 183 acres of playing fields and grassland encircled by a thin band of woodland dominated by sycamore, birch and plane. Quite frankly, at first glance it may not look like the sort of place that would attract birds. To the north are busy railway lines, to the east and west housing and to the south are the

...Beddington Farm really is a sleeping giant in London’s ornithological world grounds of the infamous prison. But despite this, the area has an incredible bird list with more than 120 species recorded since 1980, including Wryneck, Ortolan and two separate Richard’s Pipits. It also houses a colony of breeding Meadow Pipits, the closest to central London. Before setting out, I had yet to register a passage Whinchat this year, a bird that has come to symbolise all that is autumn in this part of the world. You can be guaranteed the presence of these fine-looking chats, especially during the autumn migration periods. When I first started birding here, autumnal numbers were exceptional, with one late September day resulting in a count of 22 birds – the biggest group reported in southern England that autumn. I had a good time checking bushes, managing to

connect with quite a few Whitethroats, Blackcaps and a few Willow Warblers. In the grassland, on a thistle head, among at least 200 juvenile Goldfinches, was a solitary Whinchat. My heart swelled. The next day I was in Hackbridge, deep in south London, at the invitation of Beddington Farm’s patch birders Peter Alfrey and Roger Browne. The farm is a working site with gravel extraction, landfill and sludge spreading. It also contains flooded marshy pits that are good for passage waders and the landfill site can attract hordes of gulls that can contain ‘white-winged’ scarcities including the mega Glaucous-winged Gull that seemingly commuted from Gloucester in 2007. Walking through, I couldn’t believe the transformation the site has gone through, though it looks very much like a work in progress, as the area is clearly in need of some good habitat management. At nearly four times the size of the London Wetland Centre, Beddington Farm really is a sleeping giant in London’s ornithological world. With more than 250 species on its list, of which more than 150 are seen annually, few sites within London’s boundary can come close. Amazing birds like Killdeer, Spotted Crake (that also bred in the 1960s), inland Sabine’s Gulls, Tawny Pipit, Rustic and Little Buntings are among the avian glitterati to have visited the area over the years. It is also home to one of Britain’s largest breeding populations of Tree Sparrows with some 300 youngsters fledged in 2008. These were some of the facts that I gleaned from the guys whilst strolling around the farm. Until fairly recently it was a really sludgy and smelly sewage works with restricted access. It was the lack of access that was the major bugbear for many London birders and this issue ended up giving the place a bad name. All that is about to change. The site is now allied with the futuristic and nationally important Hackbridge Sustainable Suburb Project and the farm and environs are also a hive of recycling activity. Access, although still restricted, has now been made easier for the general public, with several organised open days throughout the year. It was clear to me that the more well-known Beddington Farm becomes among the birding fraternity, the more chance this area has of being the premier urban nature reserve it deserves to be. This is what is on my doorstep. What’s on yours? ● Wormwood Scrubs: www.theurbanbirder.com ● Beddington Farm: beddingtonfarmlands.org.uk ● London Bird Club: www.lnhs.org.uk