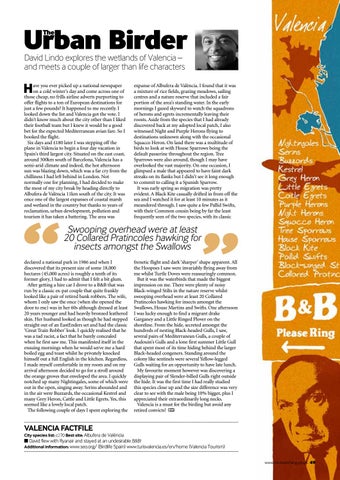 ave you ever picked up a national newspaper on a cold winter’s day and come across one of those cheap, no frills airline adverts purporting to offer flights to a ton of European destinations for just a few pounds? It happened to me recently. I looked down the list and Valencia got the vote. I didn’t know much about the city other than I liked their football team but I knew it would be a good bet for the expected Mediterranean avian fare. So I booked the flight. Six days and £180 later I was stepping off the plane in Valencia to begin a four day vacation in Spain’s third largest city. Situated on the east coast, around 300km south of Barcelona, Valencia has a semi-arid climate and indeed, the hot afternoon sun was blazing down, which was a far cry from the chilliness I had left behind in London. Not normally one for planning, I had decided to make the most of my city break by heading directly to Albufera de València 11km south of the city. It was once one of the largest expanses of coastal marsh and wetland in the country but thanks to years of reclamation, urban development, pollution and tourism it has taken a battering. The area was

expanse of Albufera de València. I found that it was a mixture of rice fields, grazing meadows, sailing centres and a nature reserve that included a fair portion of the area’s standing water. In the early mornings I gazed skyward to watch the squadrons of herons and egrets incrementally leaving their roosts. Aside from the species that I had already discovered back at my adopted local patch, I also witnessed Night and Purple Herons flying to destinations unknown along with the occasional Squacco Heron. On land there was a multitude of birds to look at with House Sparrows being the default passerine throughout the region. Tree Sparrows were also around, though I may have overlooked the vast majority. On one occasion, I glimpsed a male that appeared to have faint dark streaks on its flanks but I didn’t see it long enough to commit to calling it a Spanish Sparrow. It was early spring so migration was pretty evident. A Black Kite casually drifted in from off the sea and I watched it for at least 10 minutes as it meandered through. I saw quite a few Pallid Swifts, with their Common cousin being by far the least frequently seen of the two species, with its classic

Swooping overhead were at least 20 Collared Pratincoles hawking for insects amongst the Swallows declared a national park in 1986 and when I discovered that its present size of some 18,000 hectares (45,000 acres) is roughly a tenth of its former glory, I had to admit that I felt a bit glum. After getting a hire car I drove to a B&B that was run by a classic ex-pat couple that quite frankly looked like a pair of retired bank robbers. The wife, whom I only saw the once (when she opened the door to me) was in her 60s although dressed at least 20 years younger and had heavily bronzed leathered skin. Her husband looked as though he had stepped straight out of an EastEnders set and had the classic ‘Great Train Robber’ look. I quickly realised that he was a tad racist, a fact that he barely concealed when he first saw me. This manifested itself in the ensuing mornings when he would serve me a hard boiled egg and toast whilst he privately knocked himself out a full English in the kitchen. Regardless, I made myself comfortable in my room and on my arrival afternoon decided to go for a stroll around the orange groves that enveloped the area. I quickly notched up many Nightingales, some of which were out in the open, singing away. Serins abounded and in the air were Buzzards, the occasional Kestrel and many Grey Heron, Cattle and Little Egrets. Yes, this seemed like a lovely local patch. The following couple of days I spent exploring the

frenetic flight and dark ‘sharper’ shape apparent. All the Hoopoes I saw were invariably flying away from me whilst Turtle Doves were reassuringly common. But it was the waterbirds that made the biggest impression on me. There were plenty of noisy Black-winged Stilts in the nature reserve whilst swooping overhead were at least 20 Collared Pratincoles hawking for insects amongst the Swallows, House Martins and Swifts. One afternoon I was lucky enough to find a migrant drake Garganey and a Little Ringed Plover on the shoreline. From the hide, secreted amongst the hundreds of nesting Black-headed Gulls, I saw, several pairs of Mediterranean Gulls, a couple of Audouin’s Gulls and a lone first summer Little Gull that spent most of its time hiding behind the larger Black-headed congeners. Standing around the colony like sentinels were several Yellow-legged Gulls waiting for an opportunity to have late lunch. My favourite moment however was discovering a displaying pair of Slender-billed Gulls right outside the hide. It was the first time I had really studied this species close up and the size difference was very clear to see with the male being 10% bigger, plus I appreciated their extraordinarily long necks. Valencia is a must for the birding but avoid any retired convicts!