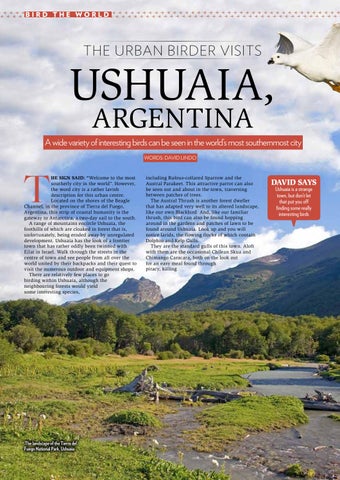 A wide variety of interesting birds can be seen in the world’s most southernmost city WORDS: DAVID LINDO

HE SIGN SAID: “Welcome to the most southerly city in the world”. However, the word city is a rather lavish description for this urban centre. Located on the shores of the Beagle Channel, in the province of Tierra del Fuego, Argentina, this strip of coastal humanity is the gateway to Antarctica, a two-day sail to the south. A range of mountains encircle Ushuaia, the foothills of which are cloaked in forest that is, unfortunately, being eroded away by unregulated development. Ushuaia has the look of a frontier town that has rather oddly been twinned with Eilat in Israel. Walk through the streets in the centre of town and see people from all over the world united by their backpacks and their quest to visit the numerous outdoor and equipment shops. There are relatively few places to go birding within Ushuaia, although the neighbouring forests would yield some interesting species,

The landscape of the Tierra del Fuego National Park, Ushuaia

including Rufous-collared Sparrow and the Austral Parakeet. This attractive parrot can also be seen out and about in the town, traversing between patches of trees. The Austral Thrush is another forest dweller that has adapted very well to its altered landscape, like our own Blackbird. And, like our familiar thrush, this bird can also be found hopping around in the gardens and patches of lawn to be found around Ushuaia. Look up and you will notice larids, the flowing flocks of which contain Dolphin and Kelp Gulls. They are the standard gulls of this town. Aloft with them are the occasional Chilean Skua and Chimango Caracara, both on the look out for an easy meal found through piracy, killing

DAVID SAYS Ushuaia is a strange town, but don’t let that put you off finding some really interesting birds

MORE INFO Many thanks to Marcelo de Cruz for the expert guiding around Ushuaia. (birding-in-ushuaia. blogspot.co.uk)

Special thanks to Simon Rowland and the team at Wildfoot Travel

They have a strange un-gull-like call, rendered as ‘kek-kek-kek’, and other high pitched utterances. Ongoing research has revealed that the Dolphin Gull has relatively small eyes compared to all other gulls. The reason for this adaptation is unclear. This species was named in honour of English explorer, William Scoresby and in days gone by it was actually called, Scoresby’s Gull.

something weaker than themselves, or by happening across carrion. Seeing as Ushuaia is quite a small place, you can get to the harbour area very quickly. It is a nice walk along the front, although the weather can change at the spin of a coin from being relatively calm and sunny to squally, icy rain. You will also see more Dolphin and Kelp Gulls close up, along with Black-crowned Night Heron and the universal House Sparrow along the shoreline or adjoining patches of grass. Flying majestically around the bay are more Chilean Skuas and Southern Giant Petrels. If you haven’t seen an albatross before, you would be forgiven for thinking that these ugly petrels were massive. The Southern Giant Petrel is to a Wandering Albatross what a Black-headed Gull is to a Great Black-back. There is a big difference. The handsome and diametrically dimorphic Kelp Goose is also a possibility along the shoreline, but they tend to be shy. This is unlike the Flying Steamer Duck, that seem quite happy to swim past the shoreline, despite the presence of excited Antarctic-bound tourists. The Flightless Steamer Duck, which is also known as the Fuegian Steamer Duck, is also a possibility. It can be surprisingly difficult to tell apart from its flying cousin. The few urban birding sites that exist within Ushuaia include the imaginatively named Urban Reserve in the west of the town, near the airport and next to the sea. Here, you will find a couple of small lakes with surrounding marshy grassland. Waders of any sort are rare here, but you should find Crested Duck, Chiloe Wigeon and Red Shoveler on the water, with Chilean Swallows

for facilitating my trip.

hawking overhead. Upland Goose and Black-faced Ibis are also regular. The grassland is also good habitat for the Correndera Pipit, a bird that is apparently fairly common throughout the area. Rock and Blue-eyed Cormorants can also be found within the harbour that butts onto the reserve. Finally, the town’s landfill site on the eastern outskirts of town is also worth a visit. At this venue, you can actually stay in your vehicle to watch the action through the chain-link fences. Thousands of gulls forage here, with the flocks normally consisting of the usual two Ushuaia suspects, but Franklin’s Gulls have also turned up. Three species of caracara can be found, including White-throated, Southern Crested and Chimango rummaging among the rubbish alongside the Turkey Vultures. On the coastline nearby, look out for Blackish Oystercatcher and further out to sea for Southern Giant Petrel, Southern Fulmar and also Blackbrowed Albatross.

DOLPHIN GULL When seen at close quarters, this gull really is a beautiful species to behold. Its dark mantle with white trailing edge to the wings is augmented by an exquisite grey wash over its head, neck and breast. To complete the look, it has a white iris offset by a vivid red eye ring and matching legs and beak. It has a dark hood in its juvenile plumage, which is unique in larids. Indeed, it can be easily mistaken for another gull species. It is a fairly common resident of coastal Chile, Argentina and the Falkland Islands, favouring rocky, muddy and sandy shores. Like most gulls it is an omnivore and, certainly in Ushuaia, is not adverse to taking and eating anything they can get from the transiting tourists.