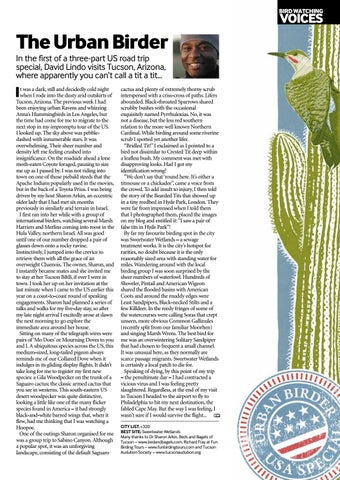 In the first of a three-part US road trip special, David Lindo visits Tucson, Arizona, where apparently you can’t call a tit a tit...

t was a dark, still and decidedly cold night when I rode into the dusty arid outskirts of Tucson, Arizona. The previous week I had been enjoying urban Ravens and whizzing Anna’s Hummingbirds in Los Angeles, but the time had come for me to migrate to the next stop in my impromptu tour of the US. I looked up. The sky above was pebbledashed with innumerable stars. It was overwhelming. Their sheer number and density left me feeling crushed into insignificance. On the roadside ahead a lone moth-eaten Coyote foraged, pausing to size me up as I passed by. I was not riding into town on one of those piebald steeds that the Apache Indians popularly used in the movies, but in the back of a Toyota Prius. I was being driven by my host Sharon Arkin, an eccentric older lady that I had met six months previously in similarly arid terrain in Israel. I first ran into her while with a group of international birders, watching several Marsh Harriers and Merlins coming into roost in the Hula Valley, northern Israel. All was good until one of our number dropped a pair of glasses down onto a rocky ravine. Instinctively, I jumped into the crevice to retrieve them with all the grace of an overweight Chamois. The owner, Sharon, and I instantly became mates and she invited me to stay at her Tucson B&B, if ever I were in town. I took her up on her invitation at the last minute when I came to the US earlier this year on a coast-to-coast round of speaking engagements. Sharon had planned a series of talks and walks for my five-day stay, so after my late night arrival I excitedly arose at dawn the next morning to go explore the immediate area around her house. Sitting on many of the telegraph wires were pairs of ‘Mo Does’ or Mourning Doves to you and I. A ubiquitous species across the US, this medium-sized, long-tailed pigeon always reminds me of our Collared Dove when it indulges in its gliding display flights. It didn’t take long for me to register my first new species: a Gila Woodpecker on the trunk of a Saguaro cactus; the classic armed cactus that you see in westerns. This south-eastern US desert woodpecker was quite distinctive, looking a little like one of the many flicker species found in America – it had strongly black-and-white barred wings that, when it flew, had me thinking that I was watching a Hoopoe. One of the outings Sharon organised for me was a group trip to Sabino Canyon. Although a popular spot, it was an unforgiving landscape, consisting of the default Saguaro

cactus and plenty of extremely thorny scrub interspersed with a criss-cross of paths. Lifers abounded. Black-throated Sparrows shared scrubby bushes with the occasional exquisitely named Pyrrhuloxias. No, it was not a disease, but the less red southern relation to the more well known Northern Cardinal. While birding around some riverine scrub I spotted yet another lifer. “Bridled Tit!” I exclaimed as I pointed to a bird not dissimilar to Crested Tit deep within a leafless bush. My comment was met with disapproving looks. Had I got my identification wrong? “We don’t say that ‘round here. It’s either a titmouse or a chickadee”, came a voice from the crowd. To add insult to injury, I then told the story of the Bearded Tits that showed up in a tiny reedbed in Hyde Park, London. They were far from impressed when I told them that I photographed them, placed the images on my blog and entitled it: “I saw a pair of false tits in Hyde Park”! By far my favourite birding spot in the city was Sweetwater Wetlands – a sewage treatment works. It is the city’s hotspot for rarities, no doubt because it is the only reasonably sized area with standing water for miles. Wandering around with the local birding group I was soon surprised by the sheer numbers of waterfowl. Hundreds of Shoveler, Pintail and American Wigeon shared the flooded basins with American Coots and around the muddy edges were Least Sandpipers, Black-necked Stilts and a few Killdeer. In the reedy fringes of some of the watercourses were calling Soras that crept unseen, more obvious Common Gallinules (recently split from our familiar Moorhen) and singing Marsh Wrens. The best bird for me was an overwintering Solitary Sandpiper that had chosen to frequent a small channel. It was unusual here, as they normally are scarce passage migrants. Sweetwater Wetlands is certainly a local patch to die for. Speaking of dying, by this point of my trip – the penultimate day – I had contracted a vicious virus and I was feeling pretty slaughtered. Regardless, at the end of my visit to Tucson I headed to the airport to fly to Philadelphia to hit my next destination, the fabled Cape May. But the way I was feeling, I wasn’t sure if I would survive the flight... CITY LIST: c320 BEST SITE: Sweetwater Wetlands Many thanks to Dr Sharon Arkin, Beds and Bagels of Tucson – www.bedandbagels.com, Richard Fray at Fun Birding Tours – www.funbirdingtours.com and Tucson Audubon Society – www.tucsonaudubon.org