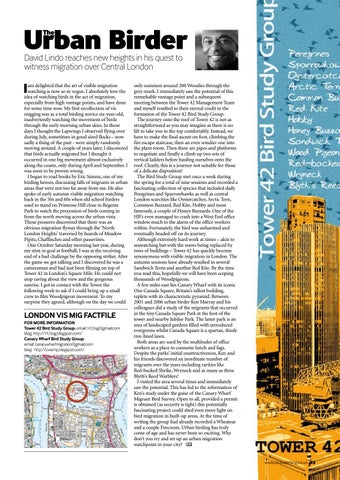 am delighted that the art of visible migration watching is now so in vogue. I absolutely love the idea of watching birds in the act of migration, especially from high vantage points, and have done for some time now. My first recollection of vis migging was as a total birding novice six-year-old, inadvertently watching the movement of birds through the early morning urban skies. In those days I thought the Lapwings I observed flying over during July, sometimes in good sized flocks – now sadly a thing of the past - were simply randomly moving around. A couple of years later, I discovered that birds actually migrated but I thought it occurred in one big movement almost exclusively along the coasts, only during April and September. I was soon to be proven wrong. I began to read books by Eric Simms, one of my birding heroes, discussing falls of migrants in urban areas that were not too far away from me. He also spoke of early autumn visible migration watching back in the 50s and 60s when old school birders used to stand on Primrose Hill close to Regents Park to watch the procession of birds coming in from the north moving across the urban vista. Those pioneers discovered that there was an obvious migration flyway through the ‘North London Heights’ traversed by hoards of Meadow Pipits, Chaffinches and other passerines. One October Saturday morning last year, during my stint in goal at football, I was at the receiving end of a bad challenge by the opposing striker. After the game we got talking and I discovered he was a cameraman and had just been filming on top of Tower 42 in London’s Square Mile. He could not stop raving about the view and the gorgeous sunrise. I got in contact with the Tower the following week to ask if I could bring up a small crew to film Woodpigeon movement. To my surprise they agreed, although on the day we could

only summon around 200 Woodies through the grey murk. I immediately saw the potential of this remarkable vantage point and a subsequent meeting between the Tower 42 Management Team and myself resulted to their eternal credit in the formation of the Tower 42 Bird Study Group. The journey onto the roof of Tower 42 is not as straightforward as you may imagine as there is no lift to take you to the top comfortably. Instead, we have to make the final ascent on foot, climbing the fire escape staircase, then an even windier one into the plant room. Then there are pipes and platforms to negotiate and finally a climb up two sets of vertical ladders before hauling ourselves onto the roof. Clearly, this is a journey not suitable for those of a delicate disposition! The Bird Study Group met once a week during the spring for a total of nine sessions and recorded a fascinating collection of species that included daily Peregrines and Sparrowhawks as well as central London scarcities like Oystercatcher, Arctic Tern, Common Buzzard, Red Kite, Hobby and most famously, a couple of Honey Buzzards. One of the HB’s even managed to crash into a West End office window much to the alarm of the office workers within. Fortunately, the bird was unharmed and eventually headed off on its journey. Although extremely hard work at times – akin to seawatching but with the waves being replaced by rows of buildings – Tower 42 has quickly become synonymous with visible migration in London. The autumn sessions have already resulted in several Sandwich Terns and another Red Kite. By the time you read this, hopefully we will have been scoping thousands of Woodpigeons. A few miles east lies Canary Wharf with its iconic One Canada Square, Britain’s tallest building, replete with its characteristic pyramid. Between 2001 and 2006 urban birder Ken Murray and his colleagues did a study of the migrants that occurred in the tiny Canada Square Park at the foot of the tower and nearby Jubilee Park. The latter park is an area of landscaped gardens filled with introduced evergreens whilst Canada Square is a spartan, thinly tree-lined lawn. Both areas are used by the multitudes of office workers as a place to consume lunch and fags. Despite the parks’ initial unattractiveness, Ken and his friends discovered an inordinate number of migrants over the years including rarities like Red-backed Shrike, Wryneck and as many as three Blyth’s Reed Warblers! I visited the area several times and immediately saw the potential. This has led to the reformation of Ken’s study under the guise of the Canary Wharf Migrant Bird Survey. Open to all, provided a permit is obtained (as security is tight) this potentially fascinating project could shed even more light on bird migration in built-up areas. At the time of writing the group had already recorded a Wheatear and a couple Firecrests. Urban birding has truly come of age and has never been so exciting. Why don’t you try and set up an urban migration watchpoint in your city? www.birdwatching.co.uk 53