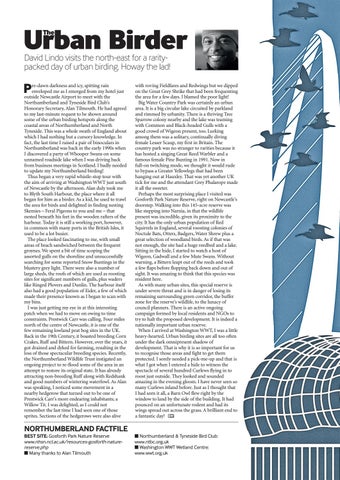 David Lindo visits the north-east for a raritypacked day of urban birding. Howay the lad!

re-dawn darkness and icy, spitting rain enveloped me as I emerged from my hotel just outside Newcastle Airport to meet with the Northumberland and Tyneside Bird Club’s Honorary Secretary, Alan Tilmouth. He had agreed to my last-minute request to be shown around some of the urban birding hotspots along the coastal areas of Northumberland and North Tyneside. This was a whole swath of England about which I had nothing but a cursory knowledge. In fact, the last time I raised a pair of binoculars in Northumberland was back in the early 1990s when I discovered a party of Whooper Swans on some unnamed roadside lake when I was driving back from business meetings in Scotland. I badly needed to update my Northumberland birding! Thus began a very rapid whistle-stop tour with the aim of arriving at Washington WWT just south of Newcastle by the afternoon. Alan duly took me to Blyth South Harbour, the place where it all began for him as a birder. As a kid, he used to trawl the area for birds and delighted in finding nesting Skemies – Feral Pigeons to you and me – that nested beneath his feet in the wooden rafters of the harbour. Today it is still a working port, however, in common with many ports in the British Isles, it used to be a lot busier. The place looked fascinating to me, with small areas of beach sandwiched between the frequent groynes. We spent a bit of time scoping the assorted gulls on the shoreline and unsuccessfully searching for some reported Snow Buntings in the blustery grey light. There were also a number of large sheds, the roofs of which are used as roosting sites for significant numbers of gulls, plus waders like Ringed Plovers and Dunlin. The harbour itself also had a good population of Eider, a few of which made their presence known as I began to scan with my bins. I was just getting my eye in at this interesting patch when we had to move on owing to time constraints. Prestwick Carr was calling. Four miles north of the centre of Newcastle, it is one of the few remaining lowland peat bog sites in the UK. Back in the 19th Century, it boasted breeding Corn Crakes, Ruff and Bittern. However, over the years, it got drained and dyked for farming, resulting in the loss of those spectacular breeding species. Recently, the Northumberland Wildlife Trust instigated an ongoing project to re-flood some of the area in an attempt to restore its original state. It has already attracting non-breeding Ruff along with Redshank and good numbers of wintering waterfowl. As Alan was speaking, I noticed some movement in a nearby hedgerow that turned out to be one of Prestwick Carr’s more endearing inhabitants; a Willow Tit. I was delighted, as I could not remember the last time I had seen one of those sprites. Sections of the hedgerows were also alive

with roving Fieldfares and Redwings but we dipped on the Great Grey Shrike that had been frequenting the area for a few days. I blamed the poor light! Big Water Country Park was certainly an urban area. It is a big circular lake circuited by parkland and rimmed by urbanity. There is a thriving Tree Sparrow colony nearby and the lake was teaming with Common and Black-headed Gulls with a good crowd of Wigeon present, too. Lurking among them was a solitary, continually diving female Lesser Scaup, my first in Britain. The country park was no stranger to rarities because it has hosted a singing Great Reed Warbler and a famous female Pine Bunting in 1991. Now in full-on twitching mode, we thought it would rude to bypass a Greater Yellowlegs that had been hanging out at Hauxley. That was yet another UK tick for me and the attendant Grey Phalarope made it all the sweeter. Perhaps the most surprising place I visited was Gosforth Park Nature Reserve, right on Newcastle’s doorstep. Walking into this 145-acre reserve was like stepping into Narnia, in that the wildlife present was incredible, given its proximity to the city. It has the only urban population of Red Squirrels in England, several roosting colonies of Noctule Bats, Otters, Badgers, Water Shrew plus a great selection of woodland birds. As if that was not enough, the site had a huge reedbed and a lake. Sitting in the hide, I started to watch a host of Wigeon, Gadwall and a few Mute Swans. Without warning, a Bittern leapt out of the reeds and took a few flaps before flopping back down and out of sight. It was amazing to think that this species was resident here. As with many urban sites, this special reserve is under severe threat and is in danger of losing its remaining surrounding green corridor, the buffer zone for the reserve’s wildlife, to the lunacy of council planners. There is an active ongoing campaign formed by local residents and NGOs to try to halt the proposed development. It is indeed a nationally important urban reserve. When I arrived at Washington WWT, I was a little heavy-hearted. Urban birding sites are all too often under the dark omnipresent shadow of development. That is why it is so important for us to recognise those areas and fight to get them protected. I sorely needed a pick-me-up and that is what I got when I entered a hide to witness the spectacle of several hundred Curlews flying in to roost just outside. They looked and sounded amazing in the evening gloom. I have never seen so many Curlews inland before. Just as I thought that I had seen it all, a Barn Owl flew right by the window to land by the side of the building. It had pounced on an unfortunate rodent and had its wings spread out across the grass. A brilliant end to a fantastic day!

The Northeast Of England

The Northeast Of England