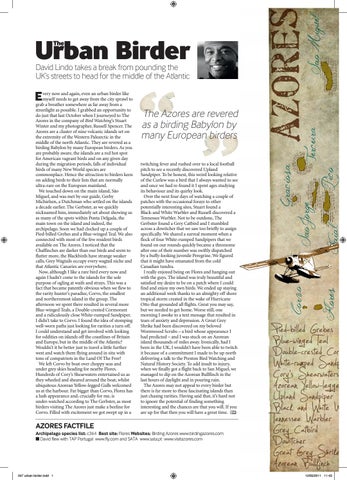 very now and again, even an urban birder like myself needs to get away from the city sprawl to grab a breather somewhere as far away from a streetlight as possible. I grabbed an opportunity to do just that last October when I journeyed to The Azores in the company of Bird Watching’s Stuart Winter and my photographer, Russell Spencer. The Azores are a cluster of nine volcanic islands set on the extremity of the Western Palearctic in the middle of the north Atlantic. They are revered as a birding Babylon by many European birders. As you are probably aware, the islands are a red hot spot for American vagrant birds and on any given day during the migration periods, falls of individual birds of many New World species are commonplace. Hence the attraction to birders keen on adding birds to their lists that are normally ultra-rare on the European mainland. We touched down on the main island, São Miguel, and was met by our guide, Gerby Michielsen, a Dutchman who settled on the islands a decade earlier. The Gerbster, as we quickly nicknamed him, immediately set about showing us as many of the spots within Ponta Delgada, the main town on the island and indeed, the archipelago. Soon we had clocked up a couple of Pied-billed Grebes and a Blue-winged Teal. We also connected with most of the few resident birds available on The Azores. I noticed that the Chaffinches are darker than our birds and seem to flutter more, the Blackbirds have strange weaker calls, Grey Wagtails occupy every wagtail niche and that Atlantic Canaries are everywhere. Now, although I like a rare bird every now and again I hadn’t come to the islands for the sole purpose of ogling at waifs and strays. This was a fact that became patently obvious when we flew to the rarity hunter’s paradise, Corvo, the smallest and northernmost island in the group. The afternoon we spent there resulted in several more Blue-winged Teals, a Double-crested Cormorant and a ridiculously close White-rumped Sandpiper. I didn’t take to Corvo. I found the idea of stomping well-worn paths just looking for rarities a turn off. I could understand and get involved with looking for oddities on islands off the coastlines of Britain and Europe, but in the middle of the Atlantic? Wouldn’t it be better just to travel a little further west and watch them flying around in situ with tons of compatriots in the Land Of The Free? We left Corvo by boat over choppy seas and under grey skies heading for nearby Flores. Hundreds of Cory’s Shearwaters entertained us as they wheeled and sheared around the boat, whilst ubiquitous Azorean Yellow-legged Gulls welcomed us at the harbour. Far bigger than Corvo, Flores has a lush appearance and, crucially for me, is under-watched according to The Gerbster, as most birders visiting The Azores just make a beeline for Corvo. Filled with excitement we got swept up in a

The Azores are revered as a birding Babylon by many European birders twitching fever and rushed over to a local football pitch to see a recently discovered Upland Sandpiper. To be honest, this weird looking relative of the Curlew was a bird that I always wanted to see and once we had re-found it I spent ages studying its behaviour and its quirky look. Over the next four days of watching a couple of patches with the occasional forays to other potentially interesting sites, Stuart found a Black-and White Warbler and Russell discovered a Tennessee Warbler. Not to be outdone, The Gerbster found a Grey Catbird and I stumbled across a dowitcher that we saw too briefly to assign specifically. We shared a surreal moment when a flock of four White-rumped Sandpipers that we found on our rounds quickly became a threesome after one of their number was swiftly dispatched by a buffy-looking juvenile Peregrine. We figured that it might have emanated from the cold Canadian tundra. I really enjoyed being on Flores and hanging out with the guys. The island was truly beautiful and satisfied my desire to be on a patch where I could find and enjoy my own birds. We ended up staying an additional week thanks to an almighty off shore tropical storm created in the wake of Hurricane Otto that grounded all flights. Great you may say, but we needed to get home. Worse still, one morning I awoke to a text message that resulted in tears of anxiety and depression. A Great Grey Shrike had been discovered on my beloved Wormwood Scrubs – a bird whose appearance I had predicted – and I was stuck on an Azorean island thousands of miles away. Ironically, had I been in the UK, I wouldn’t have been able to twitch it because of a commitment I made to be up north delivering a talk to the Preston Bird Watching and Natural History Society. To add insult to injury, when we finally got a flight back to San Miguel, we managed to dip on the Azorean Bullfinch in the last hours of daylight and in pouring rain. The Azores may not appeal to every birder but there is far more to these fascinating islands than just chasing rarities. Having said that, it’s hard not to ignore the potential of finding something interesting and the chances are that you will. If you are up for that then you will have a great time.