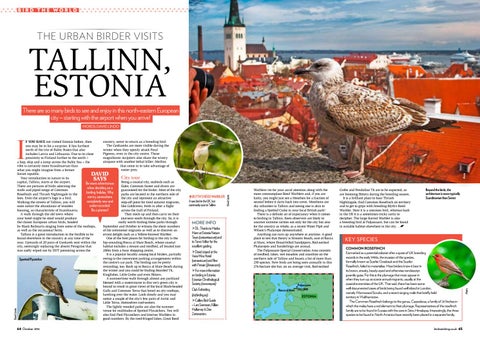 TALLINN, ESTONIA There are so many birds to see and enjoy in this north-eastern European city – starting with the airport when you arrive! WORDS: DAVID LINDO

BLYTH’S REED WARBLER A rare bird in the UK, but commonly seen in Tallinn

Warblers vie for your aural attention along with the more commonplace Reed Warblers and, if you are lucky, you might just see a Moorhen for a fraction of second before it darts back into cover. Moorhens are shy urbanites in Tallinn and seeing one is akin to finding a Spotted Crake in your local British park! There is a definite air of expectancy when it comes to birding in Tallinn. Keen observers are likely to uncover extreme rarities not only for the city but also for the country as whole, as a recent Water Pipit and Wilson’s Phalarope demonstrated. Anything can turn up anywhere at anytime. A good place to test that theory is Stroomi Beach, east of Rocca al Mare, where Broad-billed Sandpipers, Red-necked Phalaropes and Sanderlings are annual. The Paljassaare Special Conservation Area consists of reedbed, lakes, wet meadow and coastline on the northern side of Tallinn and boasts a list of more than 230 species. New birds are being seen annually in this 276-hectare site but, on an average visit, Red-necked

Grebe and Penduline Tit are to be expected, as are booming Bittern during the breeding season. It is a brilliant place to hear Thrush Nightingale, find Common Rosefinch on territory and to get to grips with breeding Blyth’s Reed Warbler. Here it is a common bird, whereas back in the UK it is a sometimes tricky rarity to decipher. The large Barred Warbler is also a breeding bird at Paljassaare, but can be found in suitable habitat elsewhere in the city.

Beyond the birds, the architecture is more typically Scandinavian than Soviet

KEY SPECIES COMMON ROSEFINCH Earmarked as a potential colonist after a spate of UK breeding records in the early 1990s, the invasion of this species, formally known as Scarlet Grosbeak and the Scarlet Rosefinch, failed to materialise. Most birders know it best in its brown, streaky, beady-eyed and otherwise nondescript juvenile guise. For this is the plumage that most appear in when they turn up as scarce annual migrants, usually at the coastal extremities of the UK. That said, there has been some well documented cases of birds being found well inland in London, namely Wormwood Scrubs, and a recent singing male that briefly held territory in Walthamstow. The Common Rosefinch belongs to the genus, Carpodacus, a family of 26 finches in which the males have a red element to their plumage. Representatives of the rosefinch family are to be found in Eurasia with the core in Sino-Himalayas. Interestingly, the three species to be found in North America have recently been placed in a separate family.

country, never to return as a breeding bird. F YOU HAVE not visited Estonia before, then The Goshawks are more visible during the you may be in for a surprise. It lies furthest winter when they openly attack Feral north of the trio of Baltic States that also Pigeons, even in the city centre. These includes Latvia and Lithuania. Due to its close magnificent Accipiters also share the wintry proximity to Finland further to the north – airspace with another lethal killer: Merlins a hop, skip and a jump across the Baltic Sea – the that come in to take advantage of vibe is certainly more Scandinavian than easier prey. what you might imagine from a former Soviet republic. Your introduction to nature in its City tour capital, Tallinn, starts at the airport. Being a coastal city, seabirds such as Be more adventurous There are pictures of birds adorning the Eider, Common Scoter and divers are when deciding on a walls and piped songs of Common guaranteed for the birder. Most of the city birding holiday. Why Rosefinch and Thrush Nightingale in the parks are located in the northern side of not try somewhere loos. Even the airport’s logo is a bird. the city and represent an attractive completely new and Walking the streets of Tallinn, you will stop-off point for tired autumn migrants, under-recorded. soon notice the abundance of wooden like Goldcrests, fresh in after a flight housing, so characteristic of Scandinavia. across the Gulf of Finland. Be a pioneer! A walk through the old town where They stock up and then carry on their your hotel might be sited would produce journeys south through the city. So, it is the classic European urban birds, headed really worth birding these parks through by Black Redstarts singing from some of the rooftops, September and October to witness the sheer numbers as well as the occasional Serin. of the commoner migrants as well as to discover an Tallinn is a great introduction to the birdlife to be errant delight such as a Yellow-browed Warbler. found elsewhere in the country at any time of the One of the best places for birding in the city is the year. Upwards of 20 pairs of Goshawk nest within the hip-sounding Rocca al Mare Beach, whose coastal city, seemingly replacing the absent Peregrine that habitat includes a stream and reedbed, all located just was sadly wiped out by DDT poisoning across the 200m from a busy shopping centre. It is a popular locality among local birders, partially owing to the convenient parking arrangements within Spotted Flycatcher the centre’s car park. The birding can be pretty rewarding, too. Rock up to Rocca al Mare Beach during the winter and you could be finding Bearded Tit, Kingfisher, Little Grebe and even Bittern. A summertime walk through almost any parkland blessed with a watercourse in this very green city is bound to result in great views of the local Black-headed Gulls and Common Terns that breed on city rooftops, hawking over the water. Look closely and you may notice a couple of the city’s few pairs of Arctic and Little Terns, themselves roof-nesters. The lightly wooded parks are also the summer venue for multitudes of Spotted Flycatchers. You will also find Pied Flycatchers and Icterine Warblers in good numbers. By the reed-fringed lakes, Great Reed