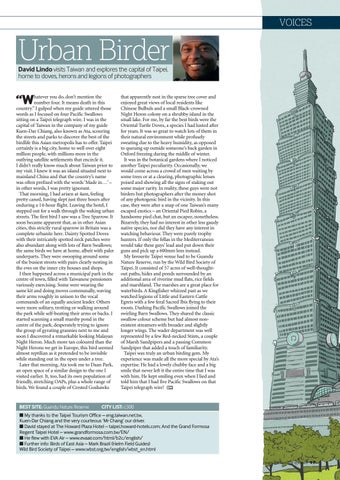 Urban Birder David Lindo visits Taiwan and explores the capital of Taipei, home to doves, herons and legions of photographers

hatever you do, don’t mention the number four. It means death in this country.’’ I gulped when my guide uttered those words as I focused on four Pacific Swallows sitting on a Taipei telegraph wire. I was in the capital of Taiwan in the company of my guide Kuen-Dar Chiang, also known as Ata, scouring the streets and parks to discover the best of the birdlife this Asian metropolis has to offer. Taipei certainly is a big city, home to well over eight million people, with millions more in the outlying satellite settlements that encircle it. I didn’t really know much about Taiwan prior to my visit. I knew it was an island situated next to mainland China and that the country’s name was often prefixed with the words ‘Made in…’ – in other words, I was pretty ignorant. That morning, I had arisen at 4am, feeling pretty caned, having slept just three hours after enduring a 14-hour flight. Leaving the hotel, I stepped out for a walk through the waking urban streets. The first bird I saw was a Tree Sparrow. It soon became apparent that, as in other Asian cities, this strictly rural sparrow in Britain was a complete urbanite here. Dainty Spotted Doves with their intricately spotted neck patches were also abundant along with lots of Barn Swallows; the same birds we have at home, albeit with paler underparts. They were swooping around some of the busiest streets with pairs clearly nesting in the eves on the inner city houses and shops. I then happened across a municipal park in the centre of town, filled with Taiwanese pensioners variously exercising. Some were wearing the same kit and doing moves communally, waving their arms roughly in unison to the vocal commands of an equally ancient leader. Others were more solitary, trotting or walking around the park while self-beating their arms or backs. I started scanning a small marshy pond in the centre of the park, desperately trying to ignore the group of gyrating grannies next to me and soon I discovered a remarkable looking Malayan Night Heron. Much more tan coloured than the Night Herons we get in Europe, this bird seemed almost reptilian as it pretended to be invisible while standing out in the open under a tree. Later that morning, Ata took me to Daan Park, an open space of a similar design to the one I visited earlier. It, too, had its own population of friendly, stretching OAPs, plus a whole range of birds. We found a couple of Crested Goshawks

that apparently nest in the sparse tree cover and enjoyed great views of local residents like Chinese Bulbuls and a small Black-crowned Night Heron colony on a shrubby island in the small lake. For me, by far the best birds were the Oriental Turtle Doves, a species I had lusted after for years. It was so great to watch lots of them in their natural environment while profusely sweating due to the heavy humidity, as opposed to queuing up outside someone’s back garden in Oxford freezing during the middle of winter. It was in the botanical gardens where I noticed another Taipei peculiarity. Occasionally, we would come across a crowd of men waiting by some trees or at a clearing, photographic lenses poised and showing all the signs of staking out some major rarity. In reality, these guys were not birders but photographers after the money shot of any photogenic bird in the vicinity. In this case, they were after a snap of one Taiwan’s many escaped exotics – an Oriental Pied Robin, a handsome pied chat, but an escapee, nonetheless. Bizarrely, they had no interest in other less gaudy native species, nor did they have any interest in watching behaviour. They were purely trophy hunters. If only the fellas in the Mediterranean would take these guys’ lead and put down their guns and pick up a 600mm lens instead. My favourite Taipei venue had to be Guandu Nature Reserve, run by the Wild Bird Society of Taipei. It consisted of 57 acres of well-thoughtout paths, hides and ponds surrounded by an additional area of riverine mud flats, rice fields and marshland. The marshes are a great place for waterbirds. A Kingfisher whizzed past as we watched legions of Little and Eastern Cattle Egrets with a few feral Sacred Ibis flying to their roosts. Dashing Pacific Swallows joined the swirling Barn Swallows. They shared the classic swallow colour scheme but had almost nonexistent streamers with broader and slightly longer wings. The wader department was well represented by a few Red-necked Stints, a couple of Marsh Sandpipers and a passing Common Sandpiper that added a touch of familiarity. Taipei was truly an urban birding gem. My experience was made all the more special by Ata’s expertise. He had a lovely chubby face and a big smile that never left it the entire time that I was with him. He kept smiling even when I lied and told him that I had five Pacific Swallows on that Taipei telegraph wire!