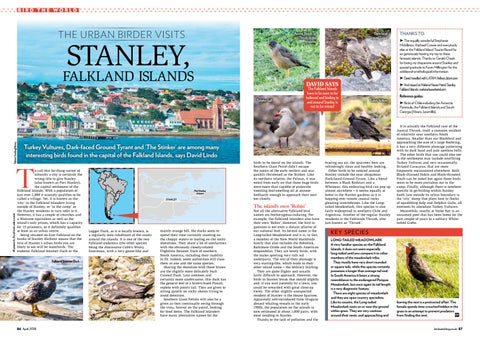 Austral Thrush, or just Thrush, to the residents

o call this far-flung corner of urbanity a city is certainly the wrong title to give Stanley (also known as Port Stanley), the capital settlement of the Falkland Islands. With a population of just over 2,000 it scarcely qualifies to be called a village. Yet, it is known as the ‘city’ to the Falkland Islanders living outside of Stanley, or ‘in the camp’ as the Stanley residents in turn refer to it. However, it has a couple of churches and a Waitrose equivalent as well as the island’s only prison, which has a capacity for 13 prisoners, so it definitely qualifies at least as an urban centre. Being situated on East Falkland on the banks of Stanley Harbour means that the first of Stanley’s urban birds you are likely to see will be waterbirds. The endemic Falkland Steamer Duck or the

The island’s own ‘Robin’

Logger Duck, as it is locally known, is a regularly seen inhabitant of the coasts around the islands. It is one of the two Falkland endemics (the other species being the diminutive Cobb’s Wren). Enormous, with a very goose-like and

mainly orange bill, the ducks seem to spend their time variously coasting on the choppy waters or loafing on the rocky shorelines. They share a lot of similarities with the obviously closely-related Flightless Steamer Duck of southern South America, including their inability to fly. Indeed, some authorities still class them as one and the same species. Sharing the shoreline with these brutes are the slightly more delicately built Crested Duck. Less common and certainly more unobtrusive, this duck has the general feel of a brown-hued Pintail, replete with pointy tail. They are given to sitting quietly on rocky shores trying to avoid detection. Southern Giant Petrels will also be a given as they continually swing through the vista, forever on the patrol, looking for food items. The Falkland Islanders have many alternative names for the

Not all the alternative Falkland bird names are borborygmus-inducing. For example, the Falkland Islanders also have their own ‘Robin’. However, the bird in question is not even a distant relative of our national bird. Its formal name is the Long-tailed Meadowlark and it is, in fact, a member of the New World blackbirds family that also includes the Bobolink, Baltimore Oriole and the South American oropendolas. They are lovely birds, with the males sporting very rich red underparts. The rest of their plumage is very starling-like, which leads to their other island name – the Military Starling. They are quite flighty and usually fairly difficult to approach. However, the birds in Stanley break that mould slightly and, if you wait patiently by a lawn, you could be rewarded with great close-up views. The other slightly unexpected resident of Stanley is the House Sparrow. Apparently self-introduced from Uruguay aboard whaling vessels in the early 1900s, the population on the islands is now estimated at about 1,000 pairs, with most residing in Stanley. Thanks to the lack of pollution and the

➤ The equally wonderful Stephanie Middleton, Rachael Crowie and everybody else at the Falkland Island Tourist Board for so generously hosting my trip to these fantastic islands. Thanks to Gerald Cheek for being my chaperone around Stanley and special gratitude to Kevin Millington for the additional ornithological information. ➤ And stayed at Malvina House Hotel, Stanley, Falkland Islands: malvinahousehotel.com

Turkey Vultures, Dark-faced Ground Tyrant and ‘The Stinker’ are among many interesting birds found in the capital of the Falkland Islands, says David Lindo birds to be found on the islands. The Southern Giant Petrel didn’t escape the notice of the early settlers and was quickly christened as the Stinker. Like its northern relative, the Fulmar, it was noted from early on that these huge birds were more than capable of projectile vomiting foul-smelling oil at anyone foolhardy enough to approach their nest too closely.

All pictures by David Lindo unless stated

bracing sea air, the sparrows here are refreshingly clean and healthy looking. Other birds to be noticed around Stanley include the near ubiquitous Dark-faced Ground Tyrant. Like a blend between a Black Redstart and a Wheatear, this endearing bird can pop up almost anywhere – it seems equally at home in the Stanley gardens as it is hopping over remote coastal rocks gleaning invertebrates. Like the Longtailed Meadowlark, this species is also fairly widespread in southern Chile and Argentina. Another of the regular Stanley residents is the Falklands Thrush, also just known as ‘Thrush’.

It is actually the Falkland race of the Austral Thrush, itself a common resident of relatively near southern South America. Smaller than our Blackbird and approaching the size of a large Redwing, it has a very different plumage patterning with its dark head and pale spotless belly. The other birds that you could also see in the settlement may include overflying Turkey Vultures and very occasionally, Striated Caracaras, that are more frequently encountered elsewhere. Both Black-chinned Siskin and Black-throated Finch can be noted but again these birds seem to be more prevalent out in the camp. Finally, although there is nowhere specific to go birding within Stanley itself, just outside its urban boundary is the ‘city’ dump that plays host to flocks of squabbling Kelp and Dolphin Gulls, all overseen by attendant Turkey Vultures. Meanwhile, nearby at Yorke Bay is an unnamed pool that has been home for the past couple of years to a solitary Whitetufted Grebe.

KE Y SPECIE S LONG-TAILED MEADOWLARK A very familiar species on the Falkland Islands, it does not seem especially long-tailed until you compare it to other members of the meadowlark tribe. They mostly have very short rounded or square tails, while this species certainly possesses a longer than average tail end. In South America it bears a strong resemblance to the endangered Pampas Meadowlark, but once again its tail length is a very diagnostic feature. There are eight species of meadowlark and they are open country specialists. Like its cousins, the Long-tailed Meadowlark nests on or near the ground within grass. They are very cautious around their nests, and approaching and

leaving the nest is a protracted affair. The female spends time crouched hidden in the grass in an attempt to prevent predators BW from finding the nest. birdwatching.co.uk 87