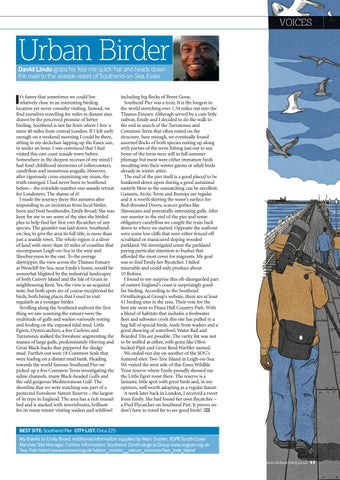 Urban Birder David Lindo grabs his ‘kiss me quick’ hat and heads down the road to the seaside resort of Southend-on-Sea, Essex

t’s funny that sometimes we could live relatively close to an interesting birding location yet never consider visiting. Instead, we find ourselves travelling for miles to distant sites drawn by the perceived promise of better birding. Southend is not far from where I live: a mere 40 miles from central London. If I left early enough on a weekend morning I could be there, sitting in my deckchair lapping up the Essex sun, in under an hour. I was convinced that I had visited this east coast seaside town before. Somewhere in the deepest recesses of my mind I had fond childhood memories of rollercoasters, candyfloss and monstrous seagulls. However, after rigorously cross-examining my mum, the truth emerged. I had never been to Southend before – the erstwhile number one seaside retreat for Londoners. The shame of it! I made the journey there this autumn after responding to an invitation from local birder, born and bred Southender, Emily Broad. She was keen for me to see some of the sites she birded plus to help find her first ever flycatcher, of any species. The gauntlet was laid down. Southendon-Sea, to give the area its full title, is more than just a seaside town. The whole region is a sliver of land with more than 10 miles of coastline that encompasses Leigh-on-Sea in the west and Shoeburyness to the east. To the average daytripper, the view across the Thames Estuary at Westcliff-by-Sea, near Emily’s home, would be somewhat blighted by the industrial landscapes of both Canvey Island and the Isle of Grain in neighbouring Kent. Yes, the view is an acquired taste, but both spots are of course exceptional for birds, both being places that I used to visit regularly as a younger birder. Strolling along the Southend seafront the first thing we saw scanning the estuary were the multitude of gulls and waders variously resting and feeding on the exposed tidal mud. Little Egrets, Oystercatchers, a few Curlews and Turnstones stalked the foreshore augmenting the masses of large gulls, predominately Herring and Great Black-backs that peppered the sludgy mud. Further out were 18 Common Seals that were loafing on a distant mud bank. Heading towards the world famous Southend Pier we picked up a few Common Terns investigating the saline channels, many Black-headed Gulls and the odd gorgeous Mediterranean Gull. The shoreline that we were watching was part of a protected Foreshore Nature Reserve – the largest of its type in England. The area has a rich mussel bed and is stacked with invertebrates, brilliant for its many winter visiting waders and wildfowl

including big flocks of Brent Geese. Southend Pier was a treat. It is the longest in the world stretching over 1.34 miles out into the Thames Estuary. Although served by a cute little railway, Emily and I decided to do the walk to the end in search of the Turnstones and Common Terns that often rested on the structure. Sure enough, we eventually found assorted flocks of both species resting up along with parties of the terns fishing just out to sea. Some of the terns were still in full summer plumage but most were either immature birds moulting into their winter garms or adult birds already in winter attire. The end of the pier itself is a good placed to be hunkered down upon during a good autumnal easterly blow as the seawatching can be excellent. Gannets, Arctic Terns and Bonxies are regular and it is worth skirting the water’s surface for Red-throated Divers, scarcer grebes like Slavonians and potentially interesting gulls. After our saunter to the end of the pier and some obligatory candyfloss we caught the train back down to where we started. Opposite the seafront were some low cliffs that were either fenced off scrubland or manicured sloping wooded parkland. We investigated some the parkland paying particular attention to bushes that afforded the most cover for migrants. My goal was to find Emily her flycatcher. I failed miserably and could only produce about 10 Robins. I found to my surprise this oft-disregarded part of eastern England’s coast is surprisingly good for birding. According to the Southend Ornithological Group’s website, there are at least 41 birding sites in the area. Their vote for the best site went to Pitsea Hall Country Park. With a blend of habitats that includes a freshwater fleet and saltwater creek this site has pulled in a bag full of special birds. Aside from waders and a good showing of waterfowl, Water Rail and Bearded Tits are possible. The rarity list was not to be sniffed at either, with gems like Olivebacked Pipit and Great Reed Warbler named. We ended our day on another of the SOG’s featured sites: Two Tree Island in Leigh-on-Sea. We visited the west side of this Essex Wildlife Trust reserve where Emily proudly showed me the Little Egret roost there. The reserve is a fantastic little spot with great birds and, in my opinion, well worth adopting as a regular haunt. A week later back in London, I received a tweet from Emily. She had found her own flycatcher – a Pied Flycatcher on Southend Pier. It proves we don’t have to travel far to see good birds!