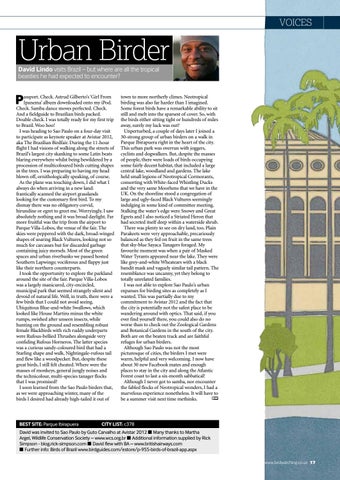 Urban Birder David Lindo visits Brazil – but where are all the tropical beasties he had expected to encounter?

assport. Check. Astrud Gilberto’s ‘Girl From Ipanema’ album downloaded onto my iPod. Check. Samba dance moves perfected. Check. And a fieldguide to Brazilian birds packed. Double check. I was totally ready for my first trip to Brazil. Woo hoo! I was heading to Sao Paulo on a four-day visit to participate as keynote speaker at Avistar 2012, aka The Brazilian Birdfair. During the 11-hour flight I had visions of walking along the streets of Brazil’s largest city skanking to some Latin beats blaring everywhere whilst being bewildered by a procession of multicoloured birds cutting shapes in the trees. I was preparing to having my head blown off, ornithologically speaking, of course. As the plane was touching down, I did what I always do when arriving in a new land: frantically scanned the airport grasslands looking for the customary first bird. To my dismay there was no obligatory corvid, hirundine or egret to greet me. Worryingly, I saw absolutely nothing and it was broad daylight. Far more fruitful was the trip from the airport to Parque Villa-Lobos, the venue of the fair. The skies were peppered with the dark, broad-winged shapes of soaring Black Vultures, looking not so much for carcasses but for discarded garbage containing juicy morsels. Most of the green spaces and urban riverbanks we passed hosted Southern Lapwings; vociferous and flappy just like their northern counterparts. I took the opportunity to explore the parkland around the site of the fair. Parque Villa-Lobos was a largely manicured, city-encircled, municipal park that seemed strangely silent and devoid of natural life. Well, in truth, there were a few birds that I could not avoid seeing. Ubiquitous Blue-and-white Swallows, which looked like House Martins minus the white rumps, swished after unseen insects, while hunting on the ground and resembling robust female Blackbirds with rich ruddy underparts were Rufous-bellied Thrushes alongside very confiding Rufous Horneros. The latter species was a curious sandy-coloured bird that had a Starling shape and walk, Nightingale-rufous tail and flew like a woodpecker. But, despite these great birds, I still felt cheated. Where were the masses of monkeys, general jungly noises and the technicolour, multi-species tanager flocks that I was promised? I soon learned from the Sao Paulo birders that, as we were approaching winter, many of the birds I desired had already high-tailed it out of

town to more northerly climes. Neotropical birding was also far harder than I imagined. Some forest birds have a remarkable ability to sit still and melt into the sparsest of cover. So, with the birds either sitting tight or hundreds of miles away, surely my luck was out? Unperturbed, a couple of days later I joined a 30-strong group of urban birders on a walk in Parque Ibirapuera right in the heart of the city. This urban park was overrun with joggers, cyclists and dogwalkers. But, despite the masses of people, there were loads of birds occupying some fairly decent habitat, that included a large central lake, woodland and gardens. The lake held small legions of Neotropical Cormorants, consorting with White-faced Whistling Ducks and the very same Moorhens that we have in the UK. On the shoreline stood a congregation of large and ugly-faced Black Vultures seemingly indulging in some kind of committee meeting. Stalking the water’s edge were Snowy and Great Egrets and I also noticed a Striated Heron that had secreted itself deep within a waterside shrub. There was plenty to see on dry land, too. Plain Parakeets were very approachable, precariously balanced as they fed on fruit in the same trees that sky-blue Sayaca Tanagers foraged. My favourite moment was when a pair of Masked Water Tyrants appeared near the lake. They were like grey-and-white Wheatears with a black bandit mask and vaguely similar tail pattern. The resemblance was uncanny, yet they belong to totally unrelated families. I was not able to explore Sao Paulo’s urban expanses for birding sites as completely as I wanted. This was partially due to my commitment to Avistar 2012 and the fact that the city is potentially not the safest place to be wandering around with optics. That said, if you ever find yourself there, you could also do no worse than to check out the Zoological Gardens and Botanical Gardens in the south of the city. Both are on the beaten track and are faithful refuges for urban birders. Although Sao Paulo was not the most picturesque of cities, the birders I met were warm, helpful and very welcoming. I now have about 30 new Facebook mates and enough places to stay in the city and along the Atlantic Forest coast to last a six-month sabbatical! Although I never got to samba, nor encounter the fabled flocks of Neotropical wonders, I had a marvelous experience nonetheless. It will have to be a summer visit next time methinks.