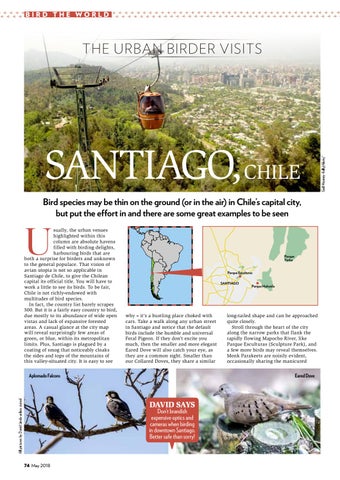 SANTIAGO,CHILE Bird species may be thin on the ground (or in the air) in Chile’s capital city, but put the effort in and there are some great examples to be seen

sually, the urban venues highlighted within this column are absolute havens filled with birding delights, harbouring birds that are both a surprise for birders and unknown to the general populace. That vision of avian utopia is not so applicable in Santiago de Chile, to give the Chilean capital its official title. You will have to work a little to see its birds. To be fair, Chile is not richly-endowed with multitudes of bird species. In fact, the country list barely scrapes 500. But it is a fairly easy country to bird, due mostly to its abundance of wide open vistas and lack of expansive forested areas. A casual glance at the city map will reveal surprisingly few areas of green, or blue, within its metropolitan limits. Plus, Santiago is plagued by a coating of smog that noticeably cloaks the sides and tops of the mountains of this valley-situated city. It is easy to see

why – it’s a bustling place choked with cars. Take a walk along any urban street in Santiago and notice that the default birds include the humble and universal Feral Pigeon. If they don’t excite you much, then the smaller and more elegant Eared Dove will also catch your eye, as they are a common sight. Smaller than our Collared Doves, they share a similar

All pictures by David Lindo unless stated

long-tailed shape and can be approached quite closely. Stroll through the heart of the city along the narrow parks that flank the rapidly flowing Mapocho River, like Parque Esculturas (Sculpture Park), and a few more birds may reveal themselves. Monk Parakeets are noisily evident, occasionally sharing the manicured

lawns with Austral Thrush, Austral Blackbird and Southern Lapwing. Introduced more than four decades ago, the Monk Parakeet has now spread considerably, which is greatly worrying ornithologists concerned about their ecological impact on native species.

The Austral Thrush (a true thrush) is the Santiago version of our familiar Blackbird and is pretty much evident throughout the city. Meanwhile, the Austral Blackbird, along with the common Shiny Cowbird, likes to have tree cover nearby and, as such, is more restricted to parkland and the slopes of the nearby foothills. These are members of the New World blackbird family and therefore not related to thrushes. The Southern Lapwing behaves very much like our Lapwing, but is noisier and also frequents areas of mown grass, even within very urban areas. Glance skywards and you may notice hirundines. During the austral summer, they are most likely to be Chilean Swallows. They bear more than a passing resemblance to House Martins, although they have visibly darker underwings with lighter primaries and secondaries. You may also happen across Chimango Caracaras during your inner city ambles. This relative of the falcons is basically biscuit brown with paler primary wing flashes which in flight sometimes lends it an uncanny similarity to Red Kites. These birds are often to be seen standing idly on structures and even on the statues in Parque Esculturas. Exploring random areas around the foothills on the edge of the city will certainly result in more birds. American Kestrel and Aplomado Falcons can be looked for perched on roadside trees, plus soaring Black-chested Buzzard-eagle, with their curious ‘all wings’ silhouette, can sometimes be seen riding the mountainside thermals. If you find a

watercourse, check it for Snowy and Great Egrets along with possible Yellowbilled Pintail. Eared Doves are common and the impossibly tiny Picui Ground Dove can be seen. When this latter species takes flight it looks like a lark. Be sure to check all the dark, starlingshaped birds you see because they could be Shiny Cowbird, Yellow-winged Blackbird or Long-tailed Meadowlarks.

Where to head for...

There are two main sites to check out while in the city. Parque Mahuida is off the tourist-beaten track on the western edge of town. It is in the foothills of the mountains and is popular with hikers. It’s a well-heeled area, making it fairly safe, and can afford good views of the city when the pollution is less thick. It is possible to see some good species here such as Chilean Flicker, Chilean Mockingbird and, if you are really lucky, Chilean Tinamou. The mockingbird can also be looked for in any of the scrubby

hilly areas that surround the city. White-crested Elaenia can also be seen as they fly catch and glean insects from the foliage. Careful scrutiny of wooded areas around the city should reveal more of these endearing American flycatchers. Another common member of the avifauna in Parque Mahuida, and elsewhere in suitable habitat, is the attractive Rufous-collared Sparrow. Also known as the Andean Sparrow it is often to be seen shuffling around on or near the ground like a Dunnock. Finally, the other site to check out is Parque Yerba. You will have to head east from Santiago towards the ski resort town of Farellones. It covers about 11,000 hectares and is about 10km out of the city, therefore stretching the boundaries of urban birding. However, it is a good spot to try for Andean Condor.

David Lindo’s new book, How To Be An Urban Birder (Princeton/Wildguides), will be available from the end of July.

THANKS TO: ➤ Stephanie Middleton and Rachael Crowie at the Falkland Island Tourist Board. Additional information supplied by Alan Henry. ➤ David travelled with LATAM Airlines: latam.com And stayed at the Holiday Inn Santiago – Airport Terminal: http://bit.ly/2G0Rb3O

K E Y SPEC IES SOUTHERN LAPWING This wader is a common and widespread species found on the banks of lakes and rivers along with open grassland habitats throughout South America. It has benefited from the clearance of forests for cattle ranching and in some areas is very much an urban bird. Indeed, they can even be watched feeding on floodlit football pitches during televised games. Southern Lapwing is part of the Vanellus genus of wader, to which our Lapwing belongs, and is one of three to be found in South America. The other species are the Pied Plover and Andean Lapwing. Although all three are fairly distinctive, the Southern Lapwing is the only one with a crest. Normally monogamous, in high

density areas they may indulge in cooperative breeding. It is the only wader in the world where adults of the same sex have been found caring for eggs and young.