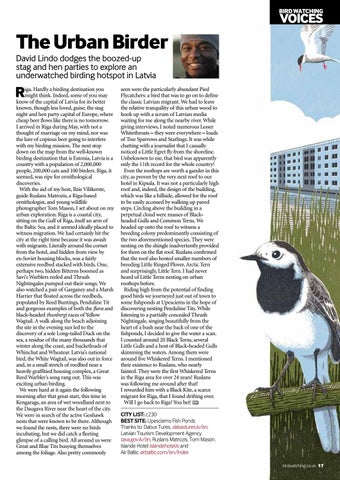 iga. Hardly a birding destination you might think. Indeed, some of you may know of the capital of Latvia for its better known, though less loved, guise; the stag night and hen party capital of Europe, where cheap beer flows like there is no tomorrow. I arrived in Riga during May, with not a thought of marriage on my mind, nor was the lure of copious beer going to interfere with my birding mission. The next stop down on the map from the well-known birding destination that is Estonia, Latvia is a country with a population of 2,000,000 people, 200,000 cats and 100 birders. Riga, it seemed, was ripe for ornithological discoveries. With the aid of my host, Ilzie Vilškerste, guide Ruslans Matrozis, a Riga-based ornithologist, and young wildlife photographer Tom Mason, I set about on my urban exploration. Riga is a coastal city, sitting on the Gulf of Riga, itself an arm of the Baltic Sea, and it seemed ideally placed to witness migration. We had certainly hit the city at the right time because it was awash with migrants. Literally around the corner from the hotel, and hidden from view by ex-Soviet housing blocks, was a fairly extensive reedbed stacked with birds. One, perhaps two, hidden Bitterns boomed as Savi’s Warblers reeled and Thrush Nightingales pumped out their songs. We also watched a pair of Garganey and a Marsh Harrier that floated across the reedbeds, populated by Reed Buntings, Penduline Tit and gorgeous examples of both the flava and black-headed thunbergi races of Yellow Wagtail. A walk along the beach adjoining the site in the evening sun led to the discovery of a sole Long-tailed Duck on the sea, a residue of the many thousands that winter along the coast, and bucketloads of Whinchat and Wheatear. Latvia’s national bird, the White Wagtail, was also out in force and, in a small stretch of reedbed near a heavily graffitied housing complex, a Great Reed Warbler’s song rang out. This was exciting urban birding. We were hard at it again the following morning after that great start, this time in Kengarags, an area of wet woodland next to the Daugava River near the heart of the city. We were in search of the active Goshawk nests that were known to be there. Although we found the nests, there were no birds incubating, but we did catch a fleeting glimpse of a calling bird. All around us were Great and Blue Tits busying themselves among the foliage. Also pretty commonly

seen were the particularly abundant Pied Flycatchers: a bird that was to go on to define the classic Latvian migrant. We had to leave the relative tranquility of this urban wood to hook up with a scrum of Latvian media waiting for me along the nearby river. While giving interviews, I noted numerous Lesser Whitethroats – they were everywhere – loads of Tree Sparrows and Starlings. It was while chatting with a journalist that I casually noticed a Little Egret fly from the shoreline. Unbeknown to me, that bird was apparently only the 11th record for the whole country! Even the rooftops are worth a gander in this city, as proven by the very next roof to our hotel in Kipsala. It was not a particularly high roof and, indeed, the design of the building, which was like a hillside, allowed for the roof to be easily accessed by walking up paved steps. Circling above the building in a perpetual cloud were masses of Blackheaded Gulls and Common Terns. We headed up onto the roof to witness a breeding colony predominantly consisting of the two aforementioned species. They were nesting on the shingle inadvertently provided for them on the flat roof. Ruslans confirmed that the roof also hosted smaller numbers of breeding Little Ringed Plover, Arctic Tern and surprisingly, Little Tern. I had never heard of Little Terns nesting on urban rooftops before. Riding high from the potential of finding good birds we journeyed just out of town to some fishponds at Upesciems in the hope of discovering nesting Penduline Tits. While listening to a partially concealed Thrush Nightingale, singing beautifully from the heart of a bush near the back of one of the fishponds, I decided to give the water a scan. I counted around 20 Black Terns, several Little Gulls and a host of Black-headed Gulls skimming the waters. Among them were around five Whiskered Terns. I mentioned their existence to Ruslans, who nearly fainted. They were the first Whiskered Terns in the Riga area for over 24 years! Ruslans was following me around after that! I rewarded him with a Black Kite, a scarce migrant for Riga, that I found drifting over. Will I go back to Riga? You bet! CITY LIST: c230 BEST SITE: Upesciems Fish Ponds Thanks to: Dabus Tures, dabastures.lv/en, Latvian Tourism Development Agency tava.gov.lv/en, Ruslans Matrozis, Tom Mason. Islande Hotel islandehotel.lv and Air Baltic airbaltic.com/en/index birdwatching.co.uk 17