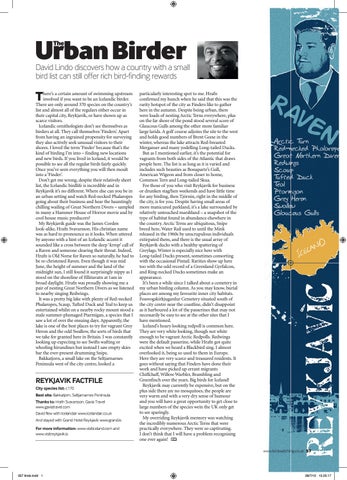 here’s a certain amount of swimming upstream involved if you want to be an Icelandic birder. There are only around 370 species on the country’s list and almost all of the regulars either occur in their capital city, Reykjavík, or have shown up as scarce visitors. Icelandic ornithologists don’t see themselves as birders at all. They call themselves ‘Finders’. Apart from having an ingrained propensity for surveying they also actively seek unusual visitors to their shores. I loved the term ‘Finder’ because that’s the kind of birding I’m into – finding new locations and new birds. If you lived in Iceland, it would be possible to see all the regular birds fairly quickly. Once you’ve seen everything you will then moult into a ‘Finder’. Don’t get me wrong, despite their relatively short list, the Icelandic birdlife is incredible and in Reykjavík it’s no different. Where else can you be in an urban setting and watch Red-necked Phalaropes going about their business and hear the hauntingly chilling wailing of Great Northern Divers – sampled in many a Hammer House of Horror movie and by cool house music producers? My Reykjavík guide was the James Corden look-alike, Hrafn Svavarsson. His christian name was as hard to pronounce as it looks. When uttered by anyone with a hint of an Icelandic accent it sounded like a cross between the deep ‘krrop’ call of a Raven and someone clearing their throat. Indeed, Hrafn is Old Norse for Raven so naturally, he had to be re-christened Raven. Even though it was mid June, the height of summer and the land of the midnight sun, I still found it surprisingly nippy as I stood on the shoreline of Elliöavatn at 1am in broad daylight. Hrafn was proudly showing me a pair of nesting Great Northern Divers as we listened to nearby singing Redwings. It was a pretty big lake with plenty of Red-necked Phalaropes, Scaup, Tufted Duck and Teal to keep us entertained whilst on a nearby rocky mount stood a male summer-plumaged Ptarmigan, a species that I saw a lot of over the ensuing days. Apparently, the lake is one of the best places to try for vagrant Grey Heron and the odd Swallow, the sorts of birds that we take for granted here in Britain. I was constantly looking up expecting to see Swifts wafting or wheeling hirundines but instead I saw empty skies bar the ever-present drumming Snipe. Bakkatjorn, a small lake on the Seltjarnarnes Peninsula west of the city centre, looked a

particularly interesting spot to me. Hrafn confirmed my hunch when he said that this was the rarity hotspot of the city as Finders like to gather here in the autumn. Despite being urban, there were loads of nesting Arctic Terns everywhere, plus on the far shore of the pond stood several score of Glaucous Gulls among the other more familiar large larids. A golf course adjoins the site to the west and holds good numbers of Brent Geese in the winter, whereas the lake attracts Red-breasted Merganser and many yodelling Long-tailed Ducks. But as I mentioned earlier, it’s the potential for vagrants from both sides of the Atlantic that draws people here. The list is as long as it is varied and includes such beauties as Bonaparte’s Gull, American Wigeon and from closer to home, Common Tern and Long-tailed Skua. For those of you who visit Reykjavík for business or drunken stag/hen weekends and have little time for any birding, then Tjörnin, right in the middle of the city, is for you. Despite having small areas of more manicured parkland, it’s a lake surrounded by relatively untouched marshland – a snapshot of the type of habitat found in abundance elsewhere in the country. Arctic Terns are ubiquitous, Snipe breed here, Water Rail used to until the Mink released in the 1960s by unscrupulous individuals extirpated them, and there is the usual array of Reykjavík ducks with a healthy spattering of Greylags. Winter is especially nice here with Long-tailed Ducks present, sometimes consorting with the occasional Pintail. Rarities show up here too with the odd record of a Greenland Gyrfalcon, and Ring-necked Ducks sometimes make an appearance. It’s been a while since I talked about a cemetery in my urban birding column. As you may know, burial places are among my favourite inner city habitats. Fossvogskirkjugardur Cemetery situated south of the city centre near the coastline, didn’t disappoint as it harboured a lot of the passerines that may not necessarily be easy to see at the other sites that I have mentioned. Iceland’s hoary looking redpoll is common here. They are very white looking, though not white enough to be vagrant Arctic Redpolls. Redwings were the default passerine, while Hrafn got quite excited when we heard a Blackbird sing. I almost overlooked it, being so used to them in Europe. Here they are very scarce and treasured residents. It goes without saying that Finders have done their work and have picked up errant migrants Chiffchaff, Willow Warbler, Brambling and Greenfinch over the years. Big birds for Iceland! Reykjavík may currently be expensive, but on the plus side there are no mosquitoes, the people are very warm and with a very dry sense of humour and you will have a great opportunity to get close to large numbers of the species wein the UK only get to see sparingly. My overriding Reykjavík memory was watching the incredibly numerous Arctic Terns that were practically everywhere. They were so captivating. I don’t think that I will have a problem recognising one ever again! www.birdwatching.co.uk 57