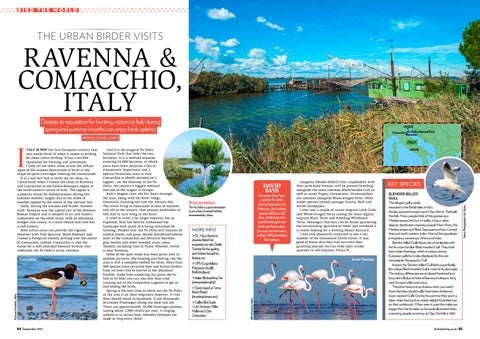 RAVENNA & COMACCHIO, ITALY Despite its reputation for hunting, visitors to Italy during spring and summer months can enjoy birds aplenty

And it is the magical Po Delta National Park that links the two locations. It is a wetland expanse covering 54,000 hectares, of which parts have been declared a Site of Community Importance and a Special Protection Area in Italy. Comacchio is ideally situated on a lagoon – on the doorstep of the Po Delta; the country’s biggest wetland and one of the largest in Europe. Italy’s longest river, the Po, flows through the area, along with the River Adige, eventually draining out into the Adriatic Sea. The rivers bring in thousands of tons of nutrientrich silt to the estuary, that attracts multitudes of fish that in turn bring in the birds. It used to cover a far larger expanse, but as expected, Man has heavily influenced the landscape with much of it being reclaimed for farming. Despite this, the Po Delta still consists of coastal dunes, salt pans, decent marshland habitat such as the Comacchio and Bertuzzi Marshes, pine forests and other wooded areas, some flooded, including Oasi di Punte Alberete, which is near Ravenna. Some of the open water has been given over to outdoor pursuits, like boating and fishing, but the area is still a complete hotbed for birds. More than 300 species have occurred here and Italian birders from all over visit to marvel at the abundant birdlife. Aside from exploring this great site by foot or by bike you can also join boat trips running out of the Comacchio Lagoons to get in and among the birds. Spring is the best time to check out the Po Delta as the area is an ideal migratory stopover. A visit then should result in hundreds, if not thousands, of Greater Flamingos sifting the food rich silt. There are approximately 10,000 flamingos present, raising about 2,000 chicks per year. A ringing scheme is in action here, whereby attempts are made to ring every chick.

Be aware that if you visit the Po Delta during September to February, the hunting season will be in full flow. Aside from the horrible thought that birds are being shot, you may not see many, as they will be avoiding the hunters.

Gorgeous Slender-billed Gulls, resplendent with their pink-hued breasts, will be present breeding alongside the more common Black-headed Gull as well as many Pygmy Cormorants. Oystercatchers are common alongside Black-winged Stilts. Other wader species include passage Dunlin, Ruff and Marsh Sandpipers. I also saw a couple of scarce migrant Little Gulls and White-winged Terns among the more regular migrant Black Terns and breeding Whiskered Terns. Montagu’s Harriers can be found quartering the surrounding agricultural fields and overhead it is worth looking for a drifting Honey Buzzard. I was also pleasantly surprised to see a fair number of the threatened Turtle Doves. It was good to know that they had survived their gruelling journey this far from their winter quarters in sub-Saharan Africa.

TALY IS NOT the first European country that you would think of when it comes to birding, let alone urban birding. It has a terrible reputation for hunting and, previously, I have all too often come across the telltale signs of the wanton destruction of birds in the shape of spent cartridges littering the countryside. It is a sad fact that is never too far away, as I discovered when I visited the cities of Ravenna and Comacchio in the Emilia-Romagna region in the north-eastern corner of Italy. The region is a popular venue for holidaymakers during the summer months, largely due to the miles of beaches lapped by the waves of the Adriatic Sea. Sadly, during the autumn and winter, hunters stalk. Ravenna was the capital city of the Western Roman Empire and is steeped in art and history. Comacchio on the other hand, with its abundant bridges and canals, is a mini-Venice that also has a rich history. Both urban areas can provide the vigilant observer with Tree Sparrow, Black Redstart and I noted a Peregrine silently drifting over the centre of Comacchio. Indeed, Comacchio is also the venue for a well-attended biennial birdfair that celebrates the Po Delta’s avian richness.

KEY SPECIES SLENDER-BILLED GULL This elegant gull is rarely recorded in the British Isles. In fact, the last accepted record was in May 2014 at Titchwell, Norfolk. Many people think of this species as a Mediterranean bird but, in reality, it has a rather disjunct distribution covering coastal West Africa, the Mediterranean and Black Seas eastward into Central Asia and north-western India. Most of the population is migratory, wintering in Africa and India. Slender-billed Gulls share a lot of similarities with the far more familiar Black-headed Gull. They both have white forewings, which is unique among European gulls but is also displayed by the rare transatlantic Bonaparte’s Gull. Indeed, the Slender-billed Gull looks superficially like a large Black-headed Gull in most of its plumages. The striking differences are its sloped forehead and long dark bill plus its habit of leaning its elegant, long neck forward while swimming. This latter feature is so obvious when you watch them that they should really have been christened Swan-necked Gulls! During the summer they sport a clean white head and an utterly delightful pinkish hue on their underparts. When seen in pairs the males are bigger than the females, as famously illustrated when a courting couple turned up at Cley, Norfolk in 1987.