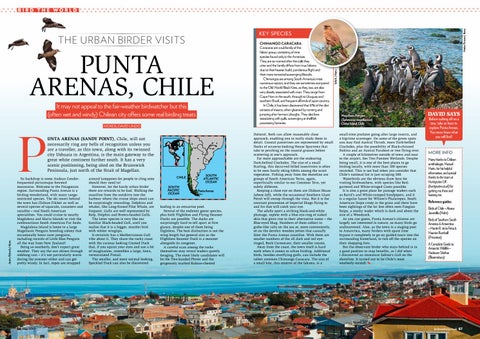 PUNTA ARENAS, CHILE It may not appeal to the fair-weather birdwatcher but this (often wet and windy) Chilean city offers some real birding treats

UNTA ARENAS (SANDY POINT), Chile, will not necessarily ring any bells of recognition unless you are a traveller, as this town, along with its twinned city Ushuaia in Argentina, is the main gateway to the great white continent further south. It has a very scenic positioning, being sited on the Brunswick Peninsula, just north of the Strait of Magellan.

Its backdrop is some Andean Condorfrequented picturesque forested mountains. Welcome to the Patagonian region. Surrounding Punta Arenas is a birding wonderland, with many rangerestricted species. The ski resort behind the town has Chilean Filcker as well as several species of tapaculo, canastero and rayadito – real South American specialities. You could cruise to nearby Magdalena and Marta Islands to visit the rambunctious South American Fur Seals. Magdalena Island is home to a large Magellanic Penguin breeding colony that occasionally hosts rarer penguins, including records of Little Blue Penguin all the way from New Zealand! Being so southerly, don’t expect great weather. They say the sun shines through sidelong rain – it’s not particularly warm during the summer either and can get pretty windy. In fact, ropes are strapped

around lampposts for people to cling onto should they need to! However, for the hardy urban birder there are rewards to be had. Walking the coastline from the outskirts into the harbour where the cruise ships await can be surprisingly rewarding. Dolphins and whales, like Long-finned Pilot Whale, are frequent. Gulls are well represented by Kelp, Dolphin and Brown-headed Gulls. The latter species is very like our familiar Black-headed Gull, until you realise that it is a bigger, sturdier bird with whiter wingtips. It certainly has a Mediterranean Gull vibe about it. They share the rocky coast with the curious looking Crested Duck that, if you squint your eyes and use a bit of imagination, resembles a large, fawn, vermiculated Pintail. The smaller, and more normal looking, Speckled Duck can also be discovered

loafing in an estuarine pool. Several of the endemic geese species, plus both Flightless and Flying Steamer Ducks are possible. The ducks are surprisingly hard to tell apart at first glance, despite one of them being flightless. The best distinction is not the wing length but general size as the Flightless Steamer Duck is a monster alongside its congener. A careful scan among the rocks themselves may reveal waders quietly foraging. The most likely candidates will be the Two-banded Plover and the gorgeously marked Rufous-chested

CHIMANGO CARACARA Caracaras are a subfamily of the falcon group, consisting of nine species found only in the Americas. They are so-named after the calls they utter and the family differs from true falcons due to their heavier build, ponderous flight and their more terrestrial scavenging lifestyle. Chimangos are among South America’s most numerous raptors, and they are sometimes compared to the Old World Black Kites, as they, too, are also very closely associated with man. They range from Cape Horn in the south, through to Uruguay and southern Brazil, and frequent all kinds of open country. In Chile, it has been discovered that 87% of the diet consists of insects, often gleaned by running and jumping after farmers’ ploughs. They also love associating with gulls, scavenging at shellfish processing factories. Dotterel. Both can allow reasonably close approach, enabling you to really study them in detail. Coastal passerines are represented by small flocks of scrawny-looking House Sparrows that take to perching on the coastal grasses before scattering at one’s approach. Far more approachable are the endearing Dark-bellied Cinclodes. The size of a small Starling, this decurved billed insectivore is often to be seen busily eking titbits among the scant vegetation. Fishing away from the shoreline are groups of South American Terns, again, superficially similar to our Common Tern, yet subtly different. Keeping a close eye on them are Chilean Skuas (above left), while the occasional Southern Giant Petrel will swoop through the vista. But it is the constant procession of Imperial Shags flying to and fro that will catch your eye. The adults sport a striking black-and-white plumage, replete with a blue eye-ring of naked skin that gives rise to their alternative name – the Blue-eyed Shag. Numbers of them collect in grebe-like rafts on the sea or, more conveniently, sit on the derelict wooden jetties that casually litter the Punta Arenas coastline. With them are smaller numbers of the all dark and red eyeringed, Rock Cormorant, their smaller cousin. Away from the coast, the town itself is hard work when it comes to urban birding. Additional birds, besides overflying gulls, can include the rather common Chimango Caracara. The size of a small kite, this relative of the falcons, is a

Magellanic Penguin (Spheniscus magellanicus) Chiloe Island, Chile small-time predator going after large insects, and a big-time scavenger. On some of the green spots you may find Austral Thrush, more Dark-bellied Cinclodes, plus the possibility of Black-chinned Siskins and an Austral Parakeet or two flying over. A couple of kilometres outside of town and near to the airport, lies Tres Puentes Wetlands. Despite being small, it is one of the best places to go birding locally, with more than 100 species recorded. This is not bad when you consider that Chile’s national list is just scraping 500. Waterbirds are the obvious draw here for visiting birdwatchers, with species like Redgartered and White-winged Coots possible. It is also a great place for passage waders such as Baird’s and White-rumped Sandpipers, and it is a regular haunt for Wilson’s Phalaropes. South American Snipe creep in the grass and there have been sightings of the far less often seen Fuegian Snipe, a stocky wader which is dark and about the size of a Woodcock. As you can guess, Punta Arenas’s citizens are largely not interested in nature, so many birds go undiscovered. Also, as the town is a staging post to Antarctica, many birders with spare time bypass it completely to go on guided tours into the surrounding hinterland, to tick off the species on their shopping lists. But the observant birder who stays behind is in a good position to reap benefits, as I did when I discovered an immature Sabine’s Gull on the shoreline. It turned out to be Chile’s most southerly record!

DAVID SAYS Before rushing off on a tour, take an hour to explore Punta Arenas. You never know what you will find!

MORE INFO Many thanks to Chilean ornithologist, Manuel Marin, for his helpful information, and special thanks to the team at Hurtigruten UK (hurtigruten.co.uk) for getting me there and hosting me. Reference guides: Birds of Chile – Alvaro Jaramillo (Helm) Birds of Southern South America & Antarctica – Martín R. de la Peña & Maurice Rumboll (Princeton) A Complete Guide to Antarctic Wildlife – Hadoram Shirihai (Bloomsbury)