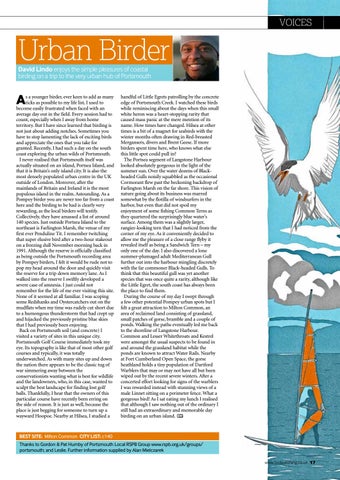 s a younger birder, ever keen to add as many ticks as possible to my life list, I used to become easily frustrated when faced with an average day out in the field. Every session had to count, especially when I away from home territory. But I have since learned that birding is not just about adding notches. Sometimes you have to stop lamenting the lack of exciting birds and appreciate the ones that you take for granted. Recently, I had such a day on the south coast exploring the urban wilds of Portsmouth. I never realised that Portsmouth itself was actually situated on an island, Portsea Island, and that it is Britain’s only island city. It is also the most densely populated urban centre in the UK outside of London. Moreover, after the mainlands of Britain and Ireland it is the most populous island in the realm. Astounding. As a Pompey birder you are never too far from a coast here and the birding to be had is clearly very rewarding, as the local birders will testify. Collectively, they have amassed a list of around 140 species. Just outside Portsea Island to the northeast is Farlington Marsh, the venue of my first ever Penduline Tit. I remember twitching that super elusive bird after a two-hour stakeout on a freezing dull November morning back in 1991. Although the reserve is officially classified as being outside the Portsmouth recording area by Pompey birders, I felt it would be rude not to pop my head around the door and quickly visit the reserve for a trip down memory lane. As I walked into the reserve I swiftly developed a severe case of amnesia. I just could not remember for the life of me ever visiting this site. None of it seemed at all familiar. I was scoping some Redshanks and Oystercatchers out on the mudflats when my time was rudely cut short due to a humongous thunderstorm that had crept up and hijacked the previously pristine blue skies that I had previously been enjoying. Back on Portsmouth soil (and concrete) I visited a variety of sites in this unique city. Portsmouth Golf Course immediately took my eye. Its topography is like that of most other golf courses and typically, it was totally underwatched. As with many sites up and down the nation there appears to be the classic tug of war simmering away between the conservationists wanting what is best for wildlife and the landowners, who, in this case, wanted to sculpt the best landscape for finding lost golf balls. Thankfully, I hear that the owners of this particular course have recently been erring on the side of reason. It is just as well, because the place is just begging for someone to turn up a wayward Hoopoe. Nearby at Hilsea, I studied a

handful of Little Egrets patrolling by the concrete edge of Portsmouth Creek. I watched these birds while reminiscing about the days when this small white heron was a heart-stopping rarity that caused mass panic at the mere mention of its name. How times have changed. Hilsea at other times is a bit of a magnet for seabirds with the winter months often drawing in Red-breasted Mergansers, divers and Brent Geese. If more birders spent time here, who knows what else this little spot could pull in? The Portsea segment of Langstone Harbour looked absolutely gorgeous in the light of the summer sun. Over the water dozens of Blackheaded Gulls noisily squabbled as the occasional Cormorant flew past the beckoning backdrop of Farlington Marsh on the far shore. This vision of nature going about its business was marred somewhat by the flotilla of windsurfers in the harbor, but even that did not spoil my enjoyment of some fishing Common Terns as they quartered the surprisingly blue water’s surface. Among them was a slightly larger, rangier-looking tern that I had noticed from the corner of my eye. As it conveniently decided to allow me the pleasure of a close range flyby it revealed itself as being a Sandwich Tern – my only one of the day. I also discovered a lone summer-plumaged adult Mediterranean Gull further out into the harbour mingling discretely with the far commoner Black-headed Gulls. To think that this beautiful gull was yet another species that was once quite a rarity, although like the Little Egret, the south coast has always been the place to find them. During the course of my day I swept through a few other potential Pompey urban spots but I felt a great attraction to Milton Common, an area of reclaimed land consisting of grassland, small patches of gorse, bramble and a couple of ponds. Walking the paths eventually led me back to the shoreline of Langstone Harbour. Common and Lesser Whitethroats and Kestrel were amongst the usual suspects to be found in and around the grassland habitat while the ponds are known to attract Water Rails. Nearby at Fort Cumberland Open Space, the gorse heathland holds a tiny population of Dartford Warblers that may or may not have all but been wiped out by the recent severe winters. After a concerted effort looking for signs of the warblers I was rewarded instead with stunning views of a male Linnet sitting on a perimeter fence. What a gorgeous bird! As I sat eating my lunch I realised that although I saw nothing out of the ordinary I still had an extraordinary and memorable day birding on an urban island.