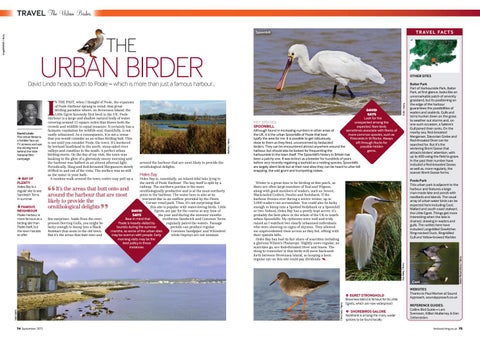 around the harbour that are most likely to provide the ornithological delights.

Holes Bay is, essentially, an inland tidal lake lying to the north of Poole Harbour. The bay itself is split by a railway. The northern portion is the more It’s the areas that butt onto and ornithologically productive and is at the most northerly point in the harbour. The water here is also at its around the harbour that are most warmest due to an outflow provided by the Fleets likely to provide the Corner retail park. Thus, it’s not surprising that this site is popular with water-loving birds. Little ornithological delights Egrets are par for the course at any time of DAVID the year and during the summer months SAYS few surprises. Aside from the evervociferous Sandwich and Common Terns Bear in mind that present Herring Gulls, you might be regularly patrol the waters. Passage Poole is heavily visited by lucky enough to bump into a Black periods can produce regular tourists during the summer Redstart that nests in the old town. Common Sandpiper and Whimbrel months, so some of the urban sites But it’s the areas that butt onto and may be overrun with people. Early while Ospreys are not unusual.

morning visits may be the best policy in those instances.

DAVID SAYS Look for the KEY SPECIES unexpected among the SPOONBILL expected. Rare birds Although found in increasing numbers in other areas of sometimes associate with flocks of the UK, it is the urban Spoonbills of Poole that best more common species, such as typify the area for me. It is possible to get ridiculously Firecrests in tit flocks. Always close to them as they feed, unconcerned by bedazzled sift through flocks for birders. They can be encountered almost anywhere around the possible hidden harbour, but should also be looked for frequenting the gems. harbourside in the town itself. The Spoonbill’s history in Britain has been a patchy one. It was extinct as a breeder for hundreds of years before very recently regaining a toehold as a nesting species. Spoonbills are largely silent birds but at their nest sites they can be heard to utter bill snapping, the odd grunt and trumpeting noises.

Baiter Park Part of Harbourside Park, Baiter Park, at first glance, looks like an unremarkable patch of amenity grassland, but its positioning on the edge of the harbour guarantees the possibilities of waders and seabirds. Gulls and terns hunker down on the grass to weather out storms and, on one such occasion, a Sabine’s Gull joined their ranks. On the nearby sea, Red-breasted Merganser, Slavonian Grebe and Red-throated Diver can be searched for. But it’s the wintering Brent Geese that attracts birders’ attention, with up to 600 using the field to graze. In the past their number have included a Red-breasted Goose, as well as, more regularly, the scarcer Brent Goose forms. Poole Park This urban park is adjacent to the harbour and features a large man-made lake and ponds with reedbeds and islands. The usual array of urban water birds can be expected here including Coot, Mallard and south coast stalwart, the Little Egret. Things get more interesting when the lake is drained, drawing in waders and gulls. The rarities here have included Long-billed Dowitcher, Ring-necked Duck, Ring-billed Gull and Yellow-browed Warbler.

Winter is a great time to be birding at this patch, as there are often large numbers of Teal and Wigeon, along with good numbers of waders, such as Avocet, Black-tailed Godwit, Dunlin and Redshank. If the harbour freezes over during a severe winter, up to 5,000 waders can accumulate. You could also be lucky enough to bump into a Spotted Redshank or a Spoonbill or two. Indeed, Holes Bay has a poorly kept secret: it’s probably the best place in the whole of the UK to watch urban Spoonbills. My eyebrows were well and truly raised as I watched two clearly urbanised individuals who were showing no signs of shyness. They allowed me unprecedented close access as they fed, sifting with their spatula bills. Holes Bay has had its fair share of scarcities including a glorious Wilson’s Phalarope. Slightly more regular, as scarcities go, are Red-throated Diver and Smew. The thing to remember is that birds will move back-andforth between Brownsea Island, so keeping a keen regular eye on this site could pay dividends. Krys Bailey / Alamy

ê FAMOUS NEIGHBOUR Poole Harbour is more famous as a birding site than Poole itself, but the town has lots to offer

N THE PAST, when I thought of Poole, the expanses of Poole Harbour sprang to mind: that great birding paradise where, on Brownsea Island, the Little Egret famously first bred in the UK. Poole Harbour is a large and shallow natural body of water covering around 15 square miles that draws both the crowds and wildlife in equal measure. It certainly has a fantastic reputation for wildlife and, thankfully, is not vastly urbanised. As a consequence, it is not a venue that you would consider as an urban birding hub. This is not until you consider Poole, the town. It’s bordered by lowland heathland to the north, steep-sided river valleys and coastline to the south. A perfect urban birding storm. On the day of my visit, the town was basking in the glow of a gloriously sunny morning and the harbour was bathed in an almost ethereal light. Periodically, Shag and Red-breasted Mergansers slowly drifted in and out of the vista. The surface was as still as the water in your bath. A random walk around the town centre may pull up a

David Lindo heads south to Poole – which is more than just a famous harbour...

é EGRET STRONGHOLD Brownsea Island is famous for its Little Egrets, which are now widespread ç SHOREBIRDS GALORE Redshank is among the many wader species to be found locally