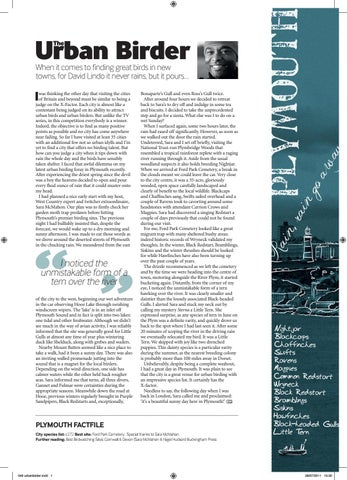 When it comes to finding great birds in new towns, for David Lindo it never rains, but it pours…

was thinking the other day that visiting the cities of Britain and beyond must be similar to being a judge on the X-Factor. Each city is almost like a contestant being judged on its ability to attract urban birds and urban birders. But unlike the TV series, in this competition everybody is a winner. Indeed, the objective is to find as many positive points as possible and no city has come anywhere near failing. So far I have visited at least 35 cities with an additional few not so urban idylls and I’m yet to find a city that offers no birding talent. But how can you judge a city when it tips down with rain the whole day and the birds have sensibly taken shelter. I faced that awful dilemma on my latest urban birding foray in Plymouth recently. After experiencing the driest spring since the devil was a boy the heavens decided to open and pour every fluid ounce of rain that it could muster onto my head. I had planned a nice early start with my host, West Country expert and twitcher extraordinaire, Sara McMahon. Our plan was to firstly check her garden moth trap predawn before hitting Plymouth’s premier birding sites. The previous night I had bullishly insisted that, despite the forecast, we would wake up to a dry morning and sunny afternoon. I was made to eat those words as we drove around the deserted streets of Plymouth in the chucking rain. We meandered from the east

I noticed the unmistakable form of a tern over the river of the city to the west, beginning our wet adventure in the car observing Hooe Lake through swishing windscreen wipers. The ‘lake’ is in an inlet off Plymouth Sound and in fact is split into two lakes: one tidal and other freshwater. Although we didn’t see much in the way of avian activity, I was reliably informed that the site was generally good for Little Gulls at almost any time of year plus wintering duck like Shelduck, along with grebes and waders. Nearby Mount Batten seemed like a nice place to take a walk, had it been a sunny day. There was also an inviting walled promenade jutting into the sound that is a magnet for the local birders. Depending on the wind direction, one side has calmer waters while the other held back rougher seas. Sara informed me that terns, all three divers, Gannet and Fulmar were certainties during the appropriate seasons. Meanwhile down the road at Hooe, previous winters regularly brought in Purple Sandpipers, Black Redstarts and, exceptionally,

Bonaparte’s Gull and even Ross’s Gull twice. After around four hours we decided to retreat back to Sara’s to dry off and indulge in some tea and biscuits. I decided to take the unprecedented step and go for a siesta. What else was I to do on a wet Sunday? When I surfaced again, some two hours later, the rain had eased off significantly. However, as soon as we walked out the door the rain started. Undeterred, Sara and I set off briefly, visiting the National Trust-run Plymbridge Woods that resembled a tropical rainforest replete with a raging river running through it. Aside from the usual woodland suspects it also holds breeding Nightjar. When we arrived at Ford Park Cemetery, a break in the clouds meant we could leave the car. Very close to the city centre, it was a 35-acre, gloriously wooded, open space carefully landscaped and clearly of benefit to the local wildlife. Blackcaps and Chaffinches sang, Swifts sailed overhead and a couple of Ravens took to cavorting around some headstones with attendant Carrion Crows and Magpies. Sara had discovered a singing Redstart a couple of days previously that could not be found during our visit. For me, Ford Park Cemetery looked like a great migrant trap with many sheltered bushy areas; indeed historic records of Wryneck validated my thoughts. In the winter, Black Redstart, Bramblings, Siskins and the winter thrushes should be looked for while Hawfinches have also been turning up over the past couple of years. The drizzle recommenced as we left the cemetery and by the time we were heading into the centre of town, motoring alongside the River Plym, it started bucketing again. Distantly, from the corner of my eye, I noticed the unmistakable form of a tern hawking over the river. It was clearly smaller and daintier than the loosely associated Black-headed Gulls. I alerted Sara and stuck my neck out by calling my mystery Sterna a Little Tern. She expressed surprise, as any species of tern in June on the Plym was a definite rarity, and quickly drove us back to the spot where I had last seen it. After some 20 minutes of scoping the river in the driving rain we eventually relocated my bird. It was a Little Tern. We skipped with joy like two drenched puppies. This dainty species is a particular rarity during the summer, as the nearest breeding colony is probably more than 100 miles away in Dorset. Unbelievably, despite being a complete washout, I had a great day in Plymouth. It was plain to see that the city is a great venue for urban birding with an impressive species list. It certainly has the X-factor. Needless to say, the following day when I was back in London, Sara called me and proclaimed: ‘it’s a beautiful sunny day here in Plymouth!’