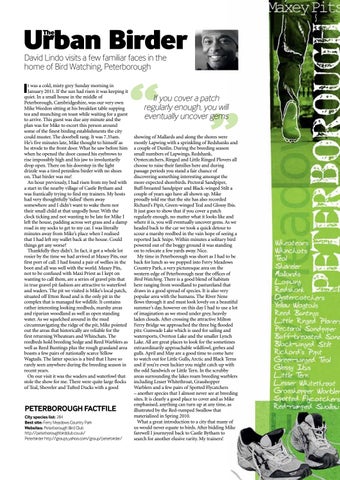 t was a cold, misty grey Sunday morning in January 2011. If the sun had risen it was keeping it quiet. In a small house in the middle of Peterborough, Cambridgeshire, was our very own Mike Weedon sitting at his breakfast table supping tea and munching on toast while waiting for a guest to arrive. This guest was due any minute and the plan was for Mike to escort this person around some of the finest birding establishments the city could muster. The doorbell rang. It was 7.35am. He’s five minutes late, Mike thought to himself as he strode to the front door. What he saw before him when he opened the door caused his eyebrows to rise impossibly high and his jaw to involuntarily drop open. There on his doorstep in the light drizzle was a tired penniless birder with no shoes on. That birder was me! An hour previously, I had risen from my bed with a start in the nearby village of Castle Bytham and was frantically trying to find my trainers. My hosts had very thoughtfully ‘tidied’ them away somewhere and I didn’t want to wake them nor their small child at that ungodly hour. With the clock ticking and not wanting to be late for Mike I left the house, padding across wet grass and a damp road in my socks to get to my car. I was literally minutes away from Mike’s place when I realised that I had left my wallet back at the house. Could things get any worse? Thankfully they didn’t. In fact, it got a whole lot rosier by the time we had arrived at Maxey Pits, our first port of call. I had found a pair of wellies in the boot and all was well with the world. Maxey Pits, not to be confused with Maxi Priest as I kept on wanting to call them, are a series of gravel pits that in true gravel pit fashion are attractive to waterfowl and waders. The pit we visited is Mike’s local patch, situated off Etton Road and is the only pit in the complex that is managed for wildlife. It contains rather interesting looking reedbeds, marshy areas and riparian woodland as well as open standing water. As we squelched around in the mud circumnavigating the ridge of the pit, Mike pointed out the areas that historically are reliable for the first returning Wheatears and Whinchats. The reedbeds hold breeding Sedge and Reed Warblers as well as Reed Buntings plus the rough grassland area boasts a few pairs of nationally scarce Yellow Wagtails. The latter species is a bird that I have so rarely seen anywhere during the breeding season in recent years. On our visit it was the waders and waterfowl that stole the show for me. There were quite large flocks of Teal, Shoveler and Tufted Ducks with a good

If you cover a patch regularly enough, you will eventually uncover gems showing of Mallards and along the shores were mostly Lapwing with a sprinkling of Redshanks and a couple of Dunlin. During the breeding season small numbers of Lapwings, Redshank, Oystercatchers, Ringed and Little Ringed Plovers all choose to raise their families here and during passage periods you stand a fair chance of discovering something interesting amongst the more expected shorebirds. Pectoral Sandpiper, Buff-breasted Sandpiper and Black-winged Stilt a couple of years ago have all shown up. Mike proudly told me that the site has also recorded Richard’s Pipit, Green-winged Teal and Glossy Ibis. It just goes to show that if you cover a patch regularly enough, no matter what it looks like and where it is, you will eventually uncover gems. As we headed back to the car we took a quick detour to scour a marshy reedbed in the vain hope of seeing a reported Jack Snipe. Within minutes a solitary bird powered out of the boggy ground it was standing on to relocate a few yards away. Nice. My time in Peterborough was short as I had to be back for lunch so we popped into Ferry Meadows Country Park, a very picturesque area on the western edge of Peterborough near the offices of Bird Watching. There is a good blend of habitats here ranging from woodland to pastureland that draws in a good spread of species. It is also very popular area with the humans. The River Nene flows through it and must look lovely on a beautiful summer’s day, however on this day I had to use a lot of imagination as we stood under grey, heavily laden clouds. After crossing the attractive Milton Ferry Bridge we approached the three big flooded pits: Gunwade Lake which is used for sailing and watersports, Overton Lake and the smaller Lynch Lake. All are great places to look for the sometimes extraordinarily approachable wildfowl, grebes and gulls. April and May are a good time to come here to watch out for Little Gulls, Arctic and Black Terns and if you’re even luckier you might catch up with the odd Sandwich or Little Tern. In the scrubby areas surrounding the lakes roam breeding warblers including Lesser Whitethroat, Grasshopper Warblers and a few pairs of Spotted Flycatchers – another species that I almost never see at breeding sites. It is clearly a good place to cover and as Mike emphasised, anything can turn up at any time, as illustrated by the Red-rumped Swallow that materialized in Spring 2010. What a great introduction to a city that many of us would never equate to birds. After bidding Mike farewell I journeyed back to Castle Bytham to search for another elusive rarity. My trainers!