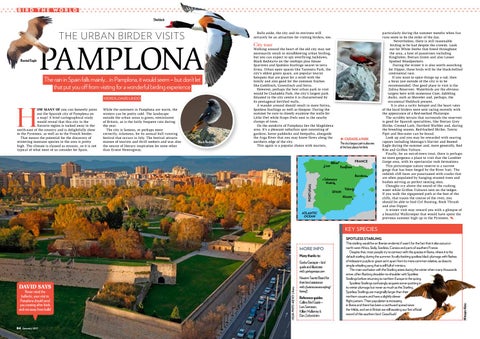 Bulls aside, the city and its environs will certainly be an attraction for visiting birders, too.

PAMPLONA The rain in Spain falls mainly… in Pamplona, it would seem – but don’t let that put you off from visiting for a wonderful birding experience WORDS: DAVID LINDO

OW MANY OF you can honestly point out the Spanish city of Pamplona on a map? A brief cartographical study would reveal that this city in the Navarre region is tucked away in the north-east of the country and is delightfully close to the Pyrenees, as well as to the French border. That means the potential for the discovery of wintering montane species in the area is pretty high. The climate is classed as oceanic, so it is not typical of what most of us consider for Spain.

While the summers in Pamplona are warm, the winters can be pretty cold. The landscape outside the urban areas is green, reminiscent of Britain, as is the fairly frequent rain during the year. The city is famous, or perhaps more correctly, infamous, for its annual bull running festival that occurs in July. The festival attracts masses of tourists and thrill seekers and was also the source of literary inspiration for none other than Ernest Hemingway.

Walking around the heart of the old city may not necessarily result in mindblowing urban birding, but you can expect to spy overflying Jackdaws, Black Redstarts on the rooftops plus House Sparrows and Spotless Starlings nearer to terra firma. Urban open spaces like Taconera Park, the city’s oldest green space, are popular tourist hotspots that are great for a stroll with the family and also good for the common finches like Goldfinch, Greenfinch and Serin. However, perhaps the best urban park to visit would be Ciudadela Park, the city’s largest park. Situated in the city centre it is characterised by its pentagonal fortified walls. A wander around should result in more Serins, Spotless Starlings as well as Hoopoe. During the summer be sure to closely examine the walls for Little Owl while Scops Owls nest in the nearby clumps of trees. On the outskirts of Pamplona lies the Magdalena area. It’s a pleasant suburban spot consisting of gardens, horse paddocks and footpaths, alongside the Arga River that you may know flows along the northern edge of the city. This again is a popular choice with tourists,

particularly during the summer months when fun runs seem to be the order of the day. Nevertheless, there is still reasonable birding to be had despite the crowds. Look out for White Storks that breed throughout the area, a host of passerines including Kingfisher, Iberian Green and also Lesser Spotted Woodpeckers. During the winter it is also worth searching for Dipper, these birds will be the black-bellied continental race. If you want to spice things up a tad, then a foray just outside of the city is to be recommended. One good place to visit is the Zolina Reservoir. Waterbirds are the obvious targets here with numerous Coot, dabbling ducks, such as Shoveler and, perhaps, the occasional Shelduck present. It is also a rarity hotspot and the heart rates of the local birders were sent racing recently with the appearance of a Red-necked Phalarope. The scrubby terrain that surrounds the reservoir is good for Spanish specialities, like Iberian Grey Shrike, Crested Lark, Dartford Warbler and, during the breeding season, Red-backed Shrike, Tawny Pipit and Bee-eater can be found. Look up and you may be rewarded with soaring raptors including Montagu’s Harrier and Booted Eagle during the summer and, more generally, Red Kite and Griffon Vulture. Finally, for an out-of-town treat, there is perhaps no more gorgeous a place to visit that the Lumbier Gorge area, with its spectacular rock formations. This picturesque nature reserve is a narrow gorge that has been forged by the River Irati. The reddish cliff faces are punctuated with cracks that are often populated by hanging stunted trees and bushes serving as perfect nesting sites. Choughs cry above the sound of the rushing water while Griffon Vultures nest on the ledges. If you walk the signposted path at the foot of the cliffs, that traces the course of the river, you should be able to find Cirl Bunting, Rock Thrush and also Dipper. A winter visit may reward you with a glimpse of a beautiful Wallcreeper that would have spent the previous summer high up in the Pyrenees.

MORE INFO Many thanks to:

DAVID SAYS Never mind the bullocks, your visit to Pamplona should send you running after birds and not away from bulls!

SPOTLESS STARLING This starling would be an Iberian endemic if wasn’t for the fact that it also occurs in north-west Africa, Sicily, Sardinia, Corsica and parts of southern France. Despite that, most people try to connect with this species in Iberia, where it is the default starling during the summer. Its oily-looking spotless black plumage with flashes of iridescent purple or green set it apart from its more common relative, as does its simple whistling song that is still full of mimicry. The main confusion with the Starling arises during the winter when many thousands arrive, often flocking shoulder-to-shoulder with Spotless Starlings before returning to northern Europe in the spring. Spotless Starlings confusingly acquires some spotting in its winter plumage but never as much as the Starling. Spotless Starlings are marginally larger than their northern cousins and have a slightly slower flight pattern. Their population is increasing in Iberia and there has been a northward spread since the 1980s, and we in Britain are still awaiting our first official record of this southern bird. Good luck!