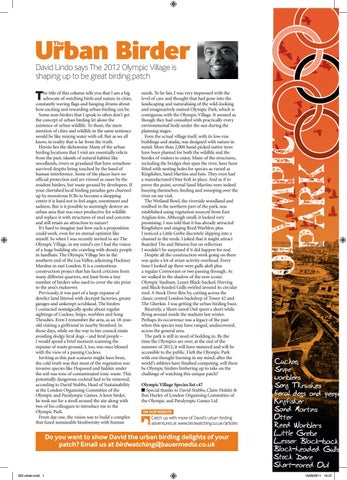 he title of this column tells you that I am a big advocate of watching birds and nature in cities, constantly waving flags and banging drums about how exciting and rewarding urban birding can be. Some non-birders that I speak to often don’t get the concept of urban birding let alone the existence of urban wildlife. To them, the mere mention of cities and wildlife in the same sentence would be like mixing water with oil. But as we all know, in reality that is far from the truth. Herein lies the dichotomy. Many of the urban birding locations that I visit are essentially relicts from the past; islands of natural habitat like woodlands, rivers or grassland that have somehow survived despite being touched by the hand of human interference. Some of the places have no official protection and are viewed as oases by the resident birders, but waste ground by developers. If your cherished local birding paradise gets churned up by monstrous JCBs to become a shopping centre it is hard not to feel anger, resentment and sadness. But is it possible to seemingly destroy an urban area that was once productive for wildlife and replace it with structures of steel and concrete and still retain an attraction to nature? It’s hard to imagine just how such a proposition could work, even for an eternal optimist like myself. So when I was recently invited to see The Olympic Village, in my mind’s eye I had the vision of a huge building site crawling with shouty people in hardhats. The Olympic Village lies in the southern end of the Lea Valley, adjoining Hackney Marshes in east London. It is a contentious construction project that has faced criticism from many different quarters, not least from a tiny number of birders who used to cover the site prior to the area’s makeover. Previously, it was part of a large expanse of derelict land littered with decrepit factories, greasy garages and unkempt scrubland. The birders I contacted nostalgically spoke about regular sightings of Cuckoo, Snipe, warblers and Song Thrushes. Even I remember the area, as an 18-yearold visiting a girlfriend in nearby Stratford. In those days, while on the way to her council estate avoiding dodgy feral dogs – and feral people – I would spend a brief moment scanning the expanse of waste ground. I, too, was once blessed with the view of a passing Cuckoo. Inviting as this past scenario might have been, the cold truth was that most of the vegetation was invasive species like Hogweed and hidden under the soil was tons of contaminated toxic waste. This potentially dangerous cocktail had to be removed, according to David Stubbs, Head of Sustainability at the London Organising Committee of the Olympic and Paralympic Games. A keen birder, he took me for a stroll around the site along with two of his colleagues to introduce me to the Olympic Park. From day one, the vision was to build a complex that fused sustainable biodiversity with human

needs. To be fair, I was very impressed with the level of care and thought that had gone into the landscaping and naturalising of the wild-looking and imaginatively named Olympic Park, which is contiguous with the Olympic Village. It seemed as though they had consulted with practically every environmental body under the sun during the planning stages. Even the actual village itself, with its low-rise buildings and stadia, was designed with nature in mind. More than 2,000 hand-picked native trees have been planted for both the wildlife and the hordes of visitors to enjoy. Many of the structures, including the bridges that span the river, have been fitted with nesting holes for species as varied as Kingfisher, Sand Martins and bats. They even had a manufactured Otter holt in place. And as if to prove the point, several Sand Martins were indeed busying themselves, feeding and swooping over the river on my visit. The Wetland Bowl, the riverside woodland and reedbed in the northern part of the park, was established using vegetation sourced from East Anglian fens. Although small, it looked very promising. I was told that it has already attracted Kingfishers and singing Reed Warblers plus I noticed a Little Grebe discretely slipping into a channel in the reeds. I joked that it might attract Bearded Tits and Bitterns but on reflection I wouldn’t be surprised if it did happen for real. Despite all the construction work going on there was quite a lot of avian activity overhead. Every time I looked up there were gulls aloft plus a regular Cormorant or two passing through. As we walked in the shadow of the now iconic Olympic Stadium, Lesser Black-backed, Herring and Black-headed Gulls swirled around its circular roof. A Stock Dove flew by, cutting across the classic central London backdrop of Tower 42 and The Gherkin. I was getting the urban birding buzz. Bizarrely, a Short-eared Owl spent a short while flying around inside the stadium last winter. Perhaps its occurrence was a legacy of the past when this species may have ranged, undiscovered, across the general area. The park is still in need of bedding in. By the time the Olympics are over, at the end of the summer of 2012, it will have matured and will be accessible to the public. I left the Olympic Park with one thought burning in my mind; after the world’s athletes have finished competing, will there be Olympic birders limbering up to take on the challenge of watching this unique patch? Olympic Village Species list c47 ■ Special thanks to David Stubbs, Claire Holder & Ben Hurley of London Organising Committee of the Olympic and Paralympic Games Ltd on our website

Catch up with more of David’s urban birding adventures at www.birdwatching.co.uk/articles

Do you want to show David the urban birding delights of your patch? Email us at birdwatching@bauermedia.co.uk