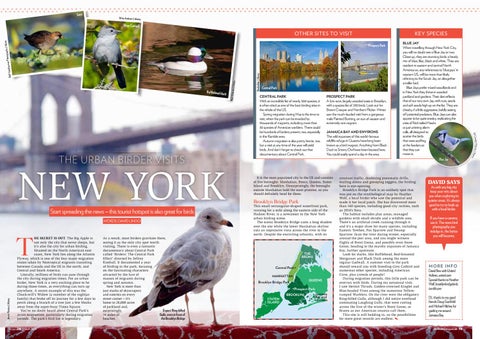 OTHER SITES TO VISIT

HE SECRET IS OUT. The Big Apple is not only the city that never sleeps, but it’s also the city for urban birding. Situated on the North American east coast, New York lies along the Atlantic Flyway, which is one of the four major migration routes taken by Neotropical migrants transiting between Canada and the US in the north, and Central and South America. Literally, millions of birds can pass through the city during migration times. For an urban birder, New York is a very exciting place to be during those times, as everything can turn up anywhere. A recent example of this was the Chuck-will’s Widow (a member of the nightjar family) that broke off its journey for a few days to perch along a branch of a tree just a few blocks away from the super-busy Times Square. You’ve no doubt heard about Central Park’s avian magnetism, particularly during migration periods. The park’s bird list is legendary.

As a result, most birders gravitate there, seeing it as the only city spot worth visiting. There is even a fantastic documentary about Central Park called ‘Birders: The Central Park Effect’ directed by Jeffrey Kimball. It documented a year of birding in the park, focusing on the fascinating characters attracted by the lure of masses of migrants during spring and autumn. New York is more than just stacks of skyscrapers and eateries on every street corner – it’s home to 28,000 acres of parkland and, surprisingly, Expect Ring-billed 14 miles of Gulls, even in front of beaches. the Brooklyn Bridge

PROSPECT PARK A 526-acre, largely wooded oasis in Brooklyn, with a species list of 280 birds. Look out for Brown Creeper and Northern Flicker. Winter saw the much-lauded visit from a gorgeous male Painted Bunting, an out-of-season and extremely rare vagrant. JAMAICA BAY AND ENVIRONS The wild expanses of this world-famous wildlife refuge in Queens have long been known as a bird magnet. Anything from Black Duck to Snowy Owl have been located here. You could easily spend a day in the area.

It is the most populated city in the US and consists of five boroughs: Manhattan, Bronx, Queens, Staten Island and Brooklyn. Unsurprisingly, the boroughs outside Manhattan hold the most promise, so you should definitely head for these.

This small rectangular-shaped waterfront park, running for a mile along the eastern side of the Hudson River, is a newcomer to the New York urban birding scene. The iconic Brooklyn Bridge casts a long shadow over the site while the lower Manhattan skyline cuts an impressive vista across the river to the north. Despite the encircling urbanity, with its

constant traffic, deafening pneumatic drills, wailing sirens and gossiping joggers, the birding here is eye-opening. Brooklyn Bridge Park is an unlikely spot that was put on the ornithological map by Heather Wolf, a local birder who saw the potential and made it her local patch. She has discovered more than 140 species, including good city rarities, such as 2014’s Sora. The habitat includes play areas, managed gardens with small shrubs and a wildlife area. There’s an artificial creek running through it and it’s a major draw for many species, including Eastern Towhee, Fox Sparrow and Swamp Sparrow. Scan the river during winter, especially around the pier area, and you might witness flights of Brent Geese, and possibly even Snow Geese, heading to the marshy expanses of Jamaica Bay, further upstream. Look for ducks, like Bufflehead, Red-breasted Merganser and Black Duck among the more regular Gadwall. A summer visit to the park should reward you with breeding Grey Catbird and numerous other species, including American Crow, plus crowds of people! During migration periods, this little park can be overrun with birds. During my autumnal visit, I saw Hermit Thrush, Golden-crowned Kinglet and Blue-headed Vireo among the numerous Yellowrumped Warblers. On the river were the obligatory Ring-billed Gulls, although I did notice overhead commuting Laughing Gulls, that were cutting across the first of the winter’s Brent Geese, or Brants as our American cousins call them. This site is still bedding in, so the possibilities for more great records are endless.

DAVID SAYS As with any big city keep your wits about you when exploring its quieter areas. It’s always good to try to hook up with a local birder. If you have a camera, use it. The more bird photography you indulge in, the better you will become.

David flew with United Airlines, united.com Special thanks to Heather Wolf, brooklynbridgebirds. tumblr.com DL: thanks to my good friends Doug Gochfeld and Michael Hilchey for guiding me around Jamaica Bay. birdwatching.co.uk 75

CENTRAL PARK With an incredible list of nearly 300 species, it is often cited as one of the best birding sites in the whole of the US. Spring migration during May is the time to visit, when the park can be invaded by thousands of migrants, including more than 30 species of American warblers. There could be hundreds of birders present, too, especially in the Ramble area. Autumn migration is also pretty hectic, too, but a visit at any time of the year will yield birds. And don’t forget to check out that documentary about Central Park.

BLUE JAY When travelling through New York City, you will no doubt see a Blue Jay or two. Close up, they are stunning birds: a heady mix of blue, lilac, black and white. They are resident in eastern and central North America so, any references to ‘blue jays’ in western US, will be more than likely referring to the Scrub Jay, an altogether smaller bird. Blue Jays prefer mixed woodlands and in New York they thrive in wooded parkland and gardens. Their diet reflects that of our very own Jay, with nuts, seeds and soft seeds high up on the list. They are cheeky, if a little aggressive, boldly seeing off potential predators. Blue Jays can also appear to be quite sneaky, replicating the cries of Red-tailed Hawks or just uttering alarm calls, all designed to scatter the birds that were scoffing at the feeders so that they can move in. Blue Jay