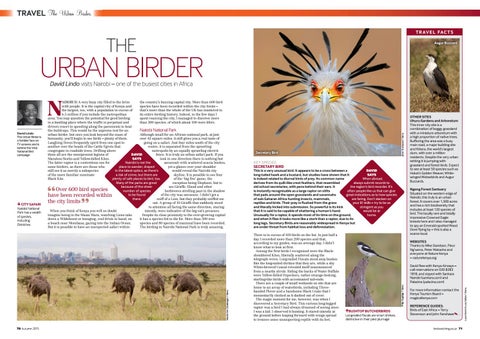 This is a very unusual bird. It appears to be a cross between a DAVID long-tailed hawk and a bustard, but studies have shown that it SAYS is indeed related to diurnal birds of prey. Its common name When abroad, derives from its quill-like crest feathers, that resembled always submit records to old school secretaries, with pens behind their ears. It the region’s bird recorder. It’s is instantly recognisable as a large raptor on stilts often people like us that can give that pads around the open grasslands and savannahs great indications as to how species of sub-Saharan Africa hunting insects, mammals, are faring. Don’t slacken on reptiles and birds. Their prey is flushed from the grass your ID skills – try to be as and literally kicked into submission. So powerful is its kick stringent as you that it is said to be capable of shattering a human’s hand. would be at Unusually for a raptor, it spends most of its time on the ground, home. and when it flies it looks more like a stork than a raptor, due to its long legs. Secretary Birds are reasonably widespread in Kenya but are under threat from habitat loss and deforestation.

There is in excess of 450 birds on the list. In just half a day I recorded more than 200 species and that, according to my guides, was an average day. I didn’t know what to look at first. Among the first birds I recognised were the Blackshouldered Kites, liberally scattered along the telegraph wires. Long-tailed Fiscals stood atop bushes like the long-tailed shrikes that they are, while a shy White-browed Coucal revealed itself unannounced from a nearby shrub. Riding the backs of Water Buffalo were Yellow-billed Oxpeckers, rather strange-looking, starling-like birds with accentuated tail-ends. There are a couple of small wetlands on site that are home to an array of waterbirds, including Threebanded Plover and a handsome Black Crake that I momentarily clocked as it dashed out of cover. The magic moment for me, however, was when I discovered a Secretary Bird. This curious long-legged raptor was a bird I had always dreamed of seeing since I was a kid. I observed it hunting. It stared intently at the ground before leaping forward with wings spread to trounce some unsuspecting reptile with its feet.

OTHER SITES Uhuru Gardens and Arboretum This inner city site is a combination of boggy grassland with a miniature arboretum with a high proportion of native trees. Buffering the area was a busy main road, a major building site and Kibera, the world’s largest slum, with over a million residents. Despite the very urban setting it is jumping with grassland and forest birds. Expect to see at least 50 species such as Holub’s Golden Weaver, Whitewinged Widowbirds and Augur Buzzards. Ngong Forest Santuary Situated on the western edge of Nairobi, this truly is an urban forest. It covers over 1,300 acres and has a rich biodiversity that includes at least 120 species of bird. The locally rare and totally impressive Crowned Eagle breeds here and I also managed to spy an Emerald-spotted Wood Dove flying by – this is also a scarce local. WEBSITES Thanks to Mike Davidson, Fleur Ng’weno, Peter Wairasho and everyone at Nature Kenya – naturekenya.org David flew with Kenya Airways – call reservations on 020 8283 1818, and stayed with Sankara Nairobi (sankara.com) and Palacina (palacina.com)

ê CITY SAFARI Nairobi National Park has a wealth of species, including Ostriches

AIROBI IS A very busy city filled to the brim the country’s buzzing capital city. More than 600 bird with people. It is the capital city of Kenya and species have been recorded within the city limits – the largest, too, with a population in excess of that’s more than the whole of the UK has mustered in 6.5 million if you include the metropolitan its entire birding history. Indeed, in the few days I area. You may question the potential for good birding spent roaming the city, I managed to discover more in a bustling place where the traffic is perpetual and than 300 species, of which about 100 were lifers. drivers resort to speeding along the pavements to beat the build-ups. This would be the supreme test for an Nairobi National Park urban birder, but once you look beyond the mass of Although small for an African national park, at just humanity, you’ll begin to see birds – plenty of them. over 42 square miles, it still gives you a real taste of Laughing Doves frequently spirit from one spot to going on a safari. Just four miles south of the city another over the heads of the Cattle Egrets that centre, it is separated from the sprawling congregate in roadside trees. Drifting above metropolis by an equally sprawling electric them all are the omnipresent legions of DAVID fence. It is truly an urban safari park. If you Marabou Storks and Yellow-billed Kites. SAYS look in one direction there is nothing but The latter raptor is a contentious one for Nairobi is not the savannah with scattered acacia bushes, some birders, as there are those who place to wander, draped yet a glance over your shoulder still see it as merely a subspecies in the latest optics, as there’s would reveal the Nairobi city of the more familiar nominate a risk of crime, but there are skyline. It is possible to see four Black Kite. plenty of safe places to bird, too. of the ‘big five’ game, the Many of the parks are great exception being Elephant, but to because of the sheer see Giraffe, Eland and other Over 600 bird species number of species herbivores strolling past in the shadow to be found of the city was awesome. I didn’t get a have been recorded within there. sniff of a Lion, but they probably sniffed me the city limits out. A group of 10 Giraffe that suddenly stood to attention all facing the same direction, staring When you think of Kenya you will no doubt intently, were indicative of the big cat’s presence. imagine being in the Masai Mara, watching Lions take Despite its close proximity to the ever-growing capital down a Wildebeest or lounging, cool drink in hand, on it has a species list to die for. More than 500 tree a beach near Mombasa, gazing into the Indian Ocean. species and 80 species of mammal have been recorded. But it is possible to have an unexpected safari within The birding in Nairobi National Park is truly amazing.