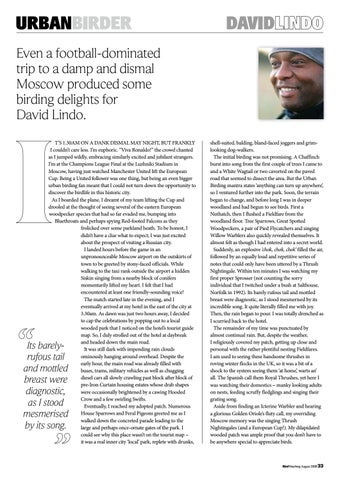 Even a football-dominated trip to a damp and dismal Moscow produced some birding delights for David Lindo. t’s 1.30am on a dank dismal May night, but frankly I couldn’t care less. I’m euphoric. “Viva Ronaldo!” the crowd chanted as I jumped wildly, embracing similarly excited and jubilant strangers. I’m at the Champions League Final at the Luzhniki Stadium in Moscow, having just watched Manchester United lift the European Cup. Being a United follower was one thing, but being an even bigger urban birding fan meant that I could not turn down the opportunity to discover the birdlife in this historic city. As I boarded the plane, I dreamt of my team lifting the Cup and drooled at the thought of seeing several of the eastern European woodpecker species that had so far evaded me, bumping into Bluethroats and perhaps spying Red-footed Falcons as they frolicked over some parkland heath. To be honest, I didn’t have a clue what to expect; I was just excited about the prospect of visiting a Russian city. I landed hours before the game in an unpronounceable Moscow airport on the outskirts of town to be greeted by stony-faced officials. While walking to the taxi rank outside the airport a hidden Siskin singing from a nearby block of conifers momentarily lifted my heart. I felt that I had encountered at least one friendly-sounding voice! The match started late in the evening, and I eventually arrived at my hotel in the east of the city at 3.30am. As dawn was just two hours away, I decided to cap the celebrations by popping out to a local wooded park that I noticed on the hotel’s tourist guide map. So, I duly strolled out of the hotel at daybreak and headed down the main road. It was still dark with impending rain clouds ominously hanging around overhead. Despite the early hour, the main road was already filled with buses, trams, military vehicles as well as chugging diesel cars all slowly crawling past block after block of pre-Iron Curtain housing estates whose drab shapes were occasionally brightened by a cawing Hooded Crow and a few swirling Swifts. Eventually, I reached my adopted patch. Numerous House Sparrows and Feral Pigeons greeted me as I walked down the concreted parade leading to the large and perhaps once-ornate gates of the park. I could see why this place wasn’t on the tourist map – it was a real inner city ‘local’ park, replete with drunks,

Its barelyrufous tail and mottled breast were diagnostic, as I stood mesmerised by its song.

shell-suited, balding, bland-faced joggers and grimlooking dog-walkers. The initial birding was not promising. A Chaffinch burst into song from the first couple of trees I came to and a White Wagtail or two cavorted on the paved road that seemed to dissect the area. But the Urban Birding mantra states ‘anything can turn up anywhere’, so I ventured further into the park. Soon, the terrain began to change, and before long I was in deeper woodland and had begun to see birds. First a Nuthatch, then I flushed a Fieldfare from the woodland floor. Tree Sparrows, Great Spotted Woodpeckers, a pair of Pied Flycatchers and singing Willow Warblers also quickly revealed themselves. It almost felt as though I had entered into a secret world. Suddenly, an explosive ‘chok, chok, chok’ filled the air, followed by an equally loud and repetitive series of notes that could only have been uttered by a Thrush Nightingale. Within ten minutes I was watching my first proper Sprosser (not counting the sorry individual that I twitched under a bush at Salthouse, Norfolk in 1992). Its barely rufous tail and mottled breast were diagnostic, as I stood mesmerised by its incredible song. It quite literally filled me with joy. Then, the rain began to pour. I was totally drenched as I scurried back to the hotel. The remainder of my time was punctuated by almost continual rain. But, despite the weather, I religiously covered my patch, getting up close and personal with the rather plentiful nesting Fieldfares. I am used to seeing these handsome thrushes in roving winter flocks in the UK, so it was a bit of a shock to the system seeing them ‘at home’, warts an’ all. The Spanish call them Royal Thrushes, yet here I was watching their domestics – manky looking adults on nests, feeding scruffy fledglings and singing their grating song. Aside from finding an Icterine Warbler and hearing a glorious Golden Oriole’s fluty call, my overriding Moscow memory was the singing Thrush Nightingales (and a European Cup!). My dilapidated wooded patch was ample proof that you don’t have to be anywhere special to appreciate birds.