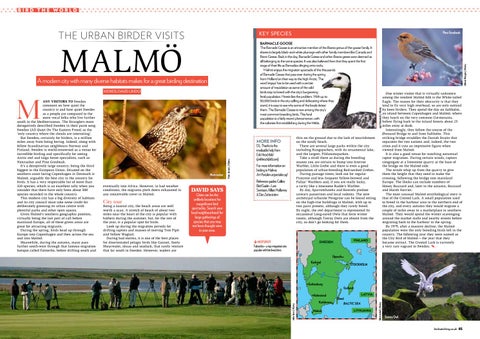 eventually into Africa. However, in bad weather conditions, the migrants pitch down exhausted in any conceivable cover in Malmö.

Being a coastal city, the beach areas are well worth a scan. A stretch of beach of about two miles near the heart of the city is popular with bathers during the summer, but, for the rest of the year, is a popular spot for birds. Look up during the migration periods for drifting raptors and masses of moving Tree Pipit and Yellow Wagtail. During bad storms, it is one of the best places for disorientated pelagic birds like Gannet, Sooty Shearwater, skuas and seaduck, that rarely venture that far south in Sweden. However, waders are

DAVID SAYS Cities can be the unlikely locations for magnificent bird spectacles. Search your local neighbourhood for large gatherings of species that you may not have thought were in your area.

DL: Thanks to the invaluable help from Erik Hirschfeld (erikhirschfeld.com)

One winter visitor that is virtually unknown among the resident Malmö folk is the White-tailed Eagle. The reason for their obscurity is that they tend to fly very high overhead, so are only noticed by keen birders. They spend the day on Saltholm, an island between Copenhagen and Malmö, where they lunch on the very common Cormorants, before flying back to the inland forests about 25 miles away at dusk. Interestingly, they follow the course of the Øresund Bridge to and from Saltholm. This striking bridge straddles the Danish Straits that separates the two nations and, indeed, the two cities and it cuts an impressive figure when viewed from Malmö. It is also a good venue for watching autumnal raptor migration. During certain winds, raptors congregate at a limestone quarry at the base of the bridge on the Malmö side. The winds whip up from the quarry to give them the height that they need to make the crossing, following the bridge into mainland Europe. The flocks can include numbers of Honey Buzzard and, later in the autumn, Buzzard and Marsh Harrier. The most unusual Malmö ornithological story is that of the Crested Lark. A small population used to breed in the harbour area in the northern end of the city, and every autumn they would migrate a couple of miles away to a marketplace in southern Malmö. They would spend the winter scavenging around the market stalls and nearby streets before migrating back to the harbour in the spring. By 1979, after a massive decline, the Malmö population were the only breeding birds left in the country. The following year they were named as the City Bird of Malmö – the year that they became extinct. The Crested Lark is currently a very rare vagrant to Sweden.

thin on the ground due to the lack of nourishment on the sandy beach. There are several large parks within the city including Kungsparken, with its ornamental lake, and the largest, Pildammsparken. Take a stroll there as during the breeding season you are certain to bump into Icterine Warbler, Little Grebe and there is even a good population of urban-breeding Red-necked Grebes. During passage times, look out for regular Firecrest and less frequent Yellow-browed and Pallas’ Warblers and, if you are really lucky, a rarity like a lonesome Radde’s Warbler. By day, Sparrowhawks and Kestrels predate unwary passerines and local rodents. The now archetypal urbanite Peregrine can be found sitting on the high-rise buildings in Malmö, with up to two pairs present, although they rarely breed. By night, the owl department is represented by occasional Long-eared Owls that form winter roosts, although Tawny Owls are absent from the city, so don’t go looking for them.

BARNACLE GOOSE The Barnacle Goose is an attractive member of the Branta genus of the goose family. It shares its largely black-and-white plumage with other family members like Canada and Brent Geese. Back in the day, Barnacle Geese and other Branta geese were deemed as all belonging to the same species. It was also believed then that they spent the first stage of their life as Barnacles clinging onto rocks. Malmö enjoys the migration spectacle of the thousands of Barnacle Geese that pass over during the spring from Holland on their way to the high Arctic. The word ‘enjoys’ has to be used with a certain amount of trepidation as some of the wild birds stop to breed with the city’s burgeoning feral population. Herein lies the problem. With up to 50,000 birds in the city calling and defecating where they stand, it is easy to see why some of the locals detest them. The Barnacle Goose is now among the city’s most common breeding birds. This feral population is a fairly recent phenomenon, with the colonies first establishing during the 1980s.

ANY VISITORS TO Sweden comment on how quiet the country is and how quiet Swedes as a people are compared to the more vocal folks who live further south in the Mediterranean. The Stranglers more derogatively described Sweden in their punk song Sweden (All Quiet On The Eastern Front) as the ‘only country where the clouds are interesting’. But Sweden, certainly for birders, is a million miles away from being boring. Indeed, along with fellow Scandinavian neighbours Norway and Finland, Sweden is world-renowned as a venue for incredible birding and specifically for seeing Arctic owl and taiga forest specialists, such as Nutcracker and Pine Grosbeak. It’s a deceptively large country, being the third biggest in the European Union. Situated on the southern coast facing Copenhagen in Denmark is Malmö, arguably the best city in the country for birds. It has a very respectable list of more than 320 species, which is an excellent tally when you consider that there have only been about 500 species recorded in the whole country. This modern city has a big diversity of habitats and its city council must take some credit for deliberately greening its urban centre with plentiful parks and other open spaces. Given Malmö’s southern geographic position, virtually being the last port of call before mainland Europe, all of these green areas are great for attracting migrants. During the spring, birds head up through Europe into Copenhagen and then across the sea and into Malmö. Meanwhile, during the autumn, many pass further south-west through that famous migration hotspot called Falsterbo, before drifting south and