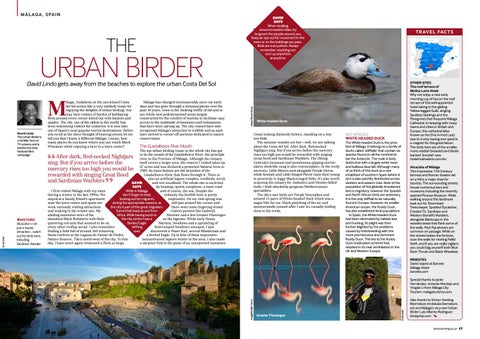 DAVID SAYS When strolling around crowded cities, try to ignore the people around you. Keep an eye out for movement in the trees or on the buildings you pass. Birds are everywhere. Always remember: anything can turn up anywhere at anytime.

êHISTORIC Alcazaba – not just a tourist attraction... watch out for birds here, including Sardinian Warbler

Crane looking distinctly forlorn, standing on a tiny wet field. The summer months are hot – well, we are talking about the Costa del Sol. After dark, Red-necked Nightjars sing. But if you arrive before the mercury rises too high you would be rewarded with singing Great Reed and Sardinian Warblers. The Zitting Cisticola’s incessant and monotonous pipping electric alarm clock-like song is also commonplace. In the reedy environs, Little Bittern nest alongside Purple Heron, while Kentish and Little Ringed Plover raise their young in proximity to leggy Black-winged Stilts. It’s also worth scanning the estuary for Audouin’s and Slender-billed Gulls – both absolutely gorgeous Mediterranean specialities. The site’s star birds are Purple Swamphen and around 15 pairs of White-headed Duck which was a major lifer for me. Much punching of the air and summersaults ensued after I saw six casually loafing close to the reeds.

The top urban birding venue in the whole city has got be the mouth of the Guadalhorce River, the principle After dark, Red-necked Nightjars to river in the Province of Málaga. Although the estuary itself covers a larger area, the reserve I visited takes up sing. But if you arrive before the acres and was declared a protected Natural Area in mercury rises too high you would be 67 1989. Its main feature are the branches of the Guadalhorce River that flows through it. There is rewarded with singing Great Reed also an artificial lagoon complex, reedbeds, scrub and Sardinian Warblers and wet woodland. The whole site is encircled DAVID by housing, sports complexes, a main road SAYS I first visited Málaga with my mum and of course, the sea. Despite the While in Málaga during a winter in the late 1990s. We urbanity the birdlife here is pretty don’t forget to keep stayed at a family friend’s apartment impressive. On my visit spring was looking out for migrants near the town centre and spent our still just around the corner and during the appropriate seasons, as week variously visiting attractions there were some lingering winter the city is part of the great migratory and soaking in the winter sun. My visitors present like Gadwall, funnel that leads to and from abiding memories were of the Shoveler and a few Greater Flamingos Africa. While having lunch in abundant Black Redstarts with their on the lagoons. While early House the city centre I saw a quivering red tails that seemed to be on Martins, Swallows and a sprinkling of Booted Eagle every other rooftop aerial. I also remember Red-rumped Swallows swooped, I also drifting finding a field full of around 160 wintering discovered a Water Rail, several Bluethroats and over. Stone-curlews at the Laguna de Fuente de Piedra a Booted Eagle. Up to four of these impressive Nature Reserve, 75km north-west of the city. To this buzzard-sized raptors winter in the area. I also made day, I have never again witnessed a flock as large. a surprise find in the guise of an unexpected immature

The White-headed Duck is the prize bird of Málaga. It belongs to a family of ducks called ‘stifftails’ that contain six species found on all the continents bar the Antarctic. The male is fairly distinctive with a largely white head and bulbous blue bill. Although many of us think of this duck as a rare inhabitant of southern Spain (which it is) it is also patchily distributed across western and eastern Asia. Most of the population of this globally threatened bird is migratory, however the Spanish and North African birds are sedentary. It is the only stifftail to be naturally found in Europe. However, its smaller American cousin, the Ruddy Duck, has also established feral populations. In Spain, the White-headed Duck had been decimated by habitat loss and hunting. Its plight was then further blighted by the problems caused by interbreeding with the more promiscuous and dominant Ruddy Duck. This led to the Ruddy Duck eradication scheme that resulted in its near annihilation in the UK and Western Europe.

OTHER SITES The roof terrace of Molina Lario Hotel Why not enjoy a nice early morning cup of tea on the roof terrace of this well-appointed hotel taking in the gliding Yellow-legged Gulls, singing Spotless Starlings and the Peregrines that frequent Málaga Cathedral. In keeping with many towns and cities in Britain and Europe, this cathedral (also known as the One Armed Lady due to it only having one spire) is a magnet for this great falcon. The birds here are of the smaller, more reddish breasted and bluish backed ‘brookei’ race. hotelmolinalario.com/en Alcazaba of Málaga This impressive 11th Century fortress and Roman theatre set on a hill is a major draw for tourists. The surrounding streets house numerous bars and museums including the recently opened Picasso Museum. While walking around this landmark look out for Short-toed Treecreeper, Spotted Flycatcher, Crested Tit, Sardinian and Western Bonelli’s Warblers, alongside Blackcaps in the wooded areas that flank some of the walls. Pied Flycatchers are common on passage. While on the streets below the fortress, scan the walls for nesting Pallid Swift, and if you are really vigilant, you could bag yourself both Blue Rock Thrush and Black Wheatear. WEBSITES David stayed at Barcelo Málaga Hotel barcelo.com Special thanks to Javier Hernández, Antonio Montejo and Yingda Li from Málaga City Tourism malagaturismo.com.

Málaga has changed immeasurably since my early days and has gone through a metamorphosis over the past 10 years. Gone is the choking traffic of old and in are whole new pedestrianised areas largely constructed for the comfort of tourists to facilitate easy access to the multitude of museums and restaurants that have since sprung up. The city council have also recognised Málaga’s attraction to wildlife and as such have strived to corner-off portions dedicated to nature conservation.

álaga, Andalucía on the sun-kissed Costa del Sol seems like a very unlikely venue for enjoying the delights of urban birding. You may have visions of hordes of holidaying Brits around every corner kitted out with buckets and spades. The city, one of the oldest in the world, has been welcoming visitors for centuries. It is now also one of Spain’s most popular tourist destinations. Before you recoil at the sheer thought of heaving streets let me tell you that I know a different Málaga. I mean, how many places do you know where you can watch Black Wheatear while enjoying a beer in a town centre?