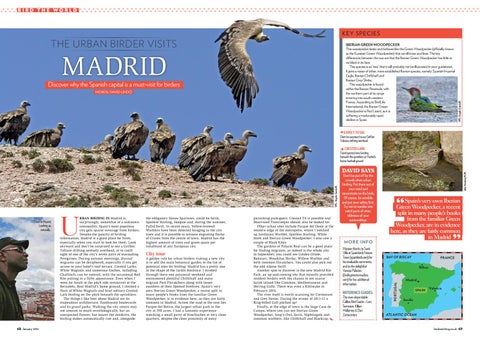 Discover why the Spanish capital is a must-visit for birders WORDS: DAVID LINDO

David in Madrid. Looking up, naturally...

RBAN BIRDING IN Madrid is, surprisingly, somewhat of a unknown commodity. Spain’s most populous city gets sparse coverage from birders. Despite the paucity of birding information, Madrid is a good place for birds, especially when you start to look for them. Look skyward and don’t be surprised to see a Griffon Vulture drifting serenely overhead, or to catch sight of one of the city’s seven pairs of marauding Peregrines. During autumn mornings, diurnal migrants can be deciphered, especially if you get access to your hotel’s roof terrace. Crested Larks, White Wagtails and numerous finches, including Chaffinch, can be noticed, with the occasional Red Kite putting in a flyby appearance. Even when I went for lunch at the pitch side restaurant at the Bernabéu, Real Madrid’s home ground, I clocked a flock of White Wagtails and brief solitary Crested Lark feeding on the pitch beneath the sprinklers. The things I like best about Madrid are its stupendous architecture, flamboyant boulevards and its grand parks. Walking the city centre may not amount to much ornithologically, bar an unexpected flyover, but nearer the outskirts, the birding stakes automatically rise and, alongside

the obligatory House Sparrows, could be Serin, Spotless Starling, Hoopoe and, during the summer, Pallid Swift. In recent years, Yellow-browed Warblers have been detected foraging in the city trees and it is possible to witness migrating flocks of Cranes from the centre of town. Madrid has the highest amount of trees and green space per inhabitant of any European city.

A golden rule for urban birders visiting a new city is to add the main botanical garden to the list of potential sites for birding. Madrid has a pretty one in the shape of the Jardín Botánico. I strolled through there one autumnal weekend and encountered plentiful Chiffchaff and many migrant Pied Flycatchers along with lesser numbers of their Spotted brethren. Spain’s very own Iberian Green Woodpecker, a recent split in many people’s books from the familiar Green Woodpecker, is in evidence here, as they are fairly common in Madrid. Across the road to the east lies Parque del Retiro, the largest urban park in the city at 350 acres. I had a fantastic experience watching a small party of Hawfinches at very close quarters, despite the close proximity of noisy

picnicking park-goers. Crested Tit is possible and Short-toed Treecreeper should also be looked for. Other urban sites include Parque del Oeste at the western edge of the metropolis, where I notched up Sardinian Warbler, Spotless Starling, White Stork and Iberian Green Woodpecker. I also saw a couple of Black Kites. The gardens of Palacio Real can be a good place for finding migrants, as indeed is the whole city. In September, you could see Golden Oriole, Redstart, Woodchat Shrike, Willow Warbler and both common flycatchers. You could also pick out the odd Alpine Swift. Another spot to discover is the new Madrid Rio Park, an up-and-coming site that recently provided resident birders with the chance to see scarce larids inland like Common, Mediterranean and Herring Gulls. There was even a Kittiwake in February 2014. The river itself is worth scanning for Cormorant and Grey Heron. During the winter of 2011-12 a Ring-billed Gull pitched up! Finally, at the edge of town is the huge Casa de Campo, where you can see Iberian Green Woodpecker, Scop’s Owl, Serin, Nightingale and common warblers, like Chiffchaff and Blackcap.

Don’t be put off by the crowds when urban birding. Put them out of your mind and concentrate on the birds. Of course, be sensible and put your safety first. Try not to wander into weird parts of cities, oblivious of your surroundings.