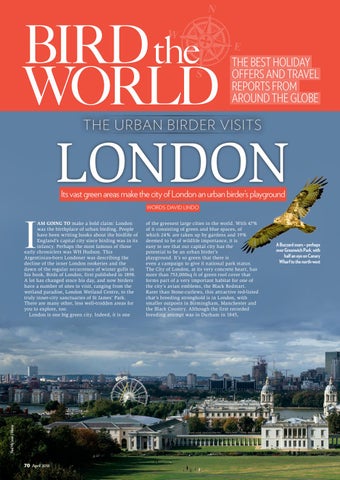 THE BEST HOLIDAY OFFERS AND TRAVEL REPORTS FROM AROUND THE GLOBE

AM GOING TO make a bold claim: London was the birthplace of urban birding. People have been writing books about the birdlife of England’s capital city since birding was in its infancy. Perhaps the most famous of those early chroniclers was WH Hudson. This Argentinian-born Londoner was describing the decline of the inner London rookeries and the dawn of the regular occurrence of winter gulls in his book, Birds of London, first published in 1898. A lot has changed since his day, and now birders have a number of sites to visit, ranging from the wetland paradise, London Wetland Centre, to the truly inner-city sanctuaries of St James’ Park. There are many other, less well-trodden areas for you to explore, too. London is one big green city. Indeed, it is one

of the greenest large cities in the world. With 47% of it consisting of green and blue spaces, of which 24% are taken up by gardens and 19% deemed to be of wildlife importance, it is easy to see that our capital city has the potential to be an urban birder’s playground. It’s so green that there is even a campaign to give it national park status. The City of London, at its very concrete heart, has more than 753,000sq ft of green roof cover that forms part of a very important habitat for one of the city’s avian emblems, the Black Redstart. Rarer than Stone-curlews, this attractive red-listed chat’s breeding stronghold is in London, with smaller outposts in Birmingham, Manchester and the Black Country. Although the first recorded breeding attempt was in Durham in 1845,

A Buzzard soars – perhaps over Greenwich Park, with half an eye on Canary Wharf to the north-west

it wasn’t until 1942 that London emerged as the epicentre of our tiny national population, with more than 20 singing males recorded.

BLACK REDSTART The Black Redstart is one of two species of redstart to be found in the UK, with the other being the summer-visiting Redstart. Formally classed as members of the thrush family, the popular thinking now is to include redstarts and other chats as Old World flycatchers. Black Red’s, as commonly coined by birders, have a large distribution, ranging from the UK across to central China and south into Morocco. Here, it is a very rare breeder and thus Red-listed, with between 40-100 breeding pairs. Their numbers are swollen to around 400 individuals during the winter. In Europe, their population is ranked at 4.5 million pairs. There are several theories as to why our population is so low, though, across the Channel, they are numerous. One interesting supposition is that their numbers are kept low by competition with the far more dominant Robin. On the continent, the Robin is very much a shy woodland dweller, so the Black Redstarts there can thrive in Black Redstart urban areas due to the lack of competition. Although well known to birders, Black Redstarts are virtually unknown to the general public. This is probably due not only to their rarity, but to their propensity for nesting on derelict land or in business areas.

the flotilla of boats and barges that surrounded it. Other avian delights include the usual common gulls, Cormorant, Mallard and Feral Pigeons along the shoreline. Waders and Common Terns can be often located downriver. I have watched prospecting Oystercatchers from the shoreline of Greenwich Peninsula Ecology Park, a promising small local nature reserve next to a housing estate. The urban birding scene within London is perhaps the most developed in the world, and upwards of 400 species have been discovered within its boundaries. WH Hudson would certainly be proud, but also saddened at the demise of London’s other emblematic species, the House Sparrow. There are now just a handful of places in Central London where its cheeky chirps can still be heard. Keep exploring those hidden corners, not only to find more sparrows, but also to discover tomorrow’s new urban birding hotspots.

The Square Mile is also the location for Tower 42. Standing at 600ft over London’s busy streets, it is now dwarfed by other far higher, and more modern skyscrapers, like The Shard and the Leadenhall Building. Nonetheless, it is the headquarters of the Tower 42 Bird Study Group, which spends many hours during the spring and autumn scanning the skies for drifting migrant raptors. Tower 42 has a flat roof offering a magnificent 360° panorama of London. Over the years the Study Group has recorded regular Buzzards, occasional Sparrowhawk and more rarely, Kestrel, Hobby, Red Kite, both Hen and Marsh Harriers and remarkably, two Honey Buzzards. One thing that you are guaranteed to see on every visit is a Peregrine. From the roof you can observe up to six territories of this remarkable raptor. It is quite amazing what you will see if you take the time to look up. Further east, close to the border with Essex and sidled next to the Thames, lies another concrete island, Canary Wharf. At first glance, it appears to be a sterile-looking business area, dominated by the towering pyramid-topped One Canada Square. But in the public green space directly below the tower, and nearby in lightly wooded Jubilee Park, next to Canary Wharf station, there are birds to be found, especially during migration periods. Incredible records emanate from here, ranging from regular Firecrest, Wheatear and common warblers like Chiffchaff to Wryneck, Grasshopper Warbler and even Blyth’s Reed Warbler – all apparently lured in overnight by the bright lights that sit on the crown of One Canada Square. This area has not been birded with much regularity over recent years, largely because the bright lights are now dimmer due to complaints regarding the resultant light pollution. One of the main features of London is the Thames, and it is always worth a scan even if you are enjoying a lunchtime drink on the crowded Southbank. On one such occasion, I watched an adult Shag, as it continuously dived, oblivious to

DAVID SAYS Make it your mission to discover new places for birding in urban areas. Report urban crimes against wildlife whenever you come across it.