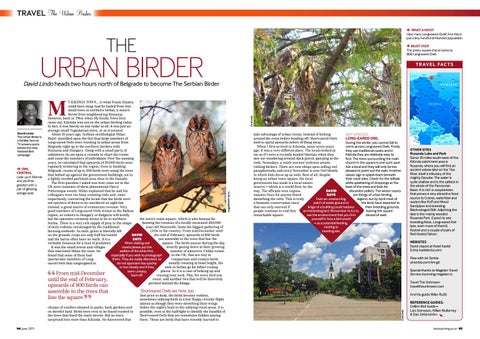 TRAVEL The Urban Birder ç WHAT A HOOT How many Long-eared Owls? And this is just a tiny handful of Kikinda’s population

clumps of conifers situated in parks, back gardens and on derelict land. Birds were even to be found roosted in the trees that lined the main streets. But no town surprised him more than Kikinda. He discovered that 94 June 2015

take advantage of urban roosts. Instead of lurking KEY SPECIES around the roost before heading off, Short-eared Owls LONG-EARED OWL tend to spiral upwards before drifting away. During the winter, you cannot fail to When I first arrived in Kikinda, some seven years come across Long-eared Owls. Firstly, ago, it was a very different place. The locals looked at they use traditional roosts and in me as if I were a recently landed Martian when they Kikinda they are relatively easy to saw me wandering around slack jawed, gawping at the find. The trees surrounding the main owls. Nowadays, a much warmer welcome awaits church in the square is one such spot. visiting birders. There are now shops open selling owl Ask a local and they will only be too paraphernalia and every November is now Owl Month, pleased to point out the owls. Another in which kids dress up as owls. Best of all, despite classic sign is splash-back beneath being an urban town square, the local their roost sites. Check for the telltale government has made it a local nature white splattering of droppings at the reserve – which is a world first, by the base of the trees and look for way. The officials even impose DAVID discarded pellets. The winter roosts massive fines for anyone found SAYS are things of urban birding disturbing the owls. This is truly Even an unassuming legend, but by April most of a fantastic conservation story patch of waste ground or the birds have departed to that can only succeed if ledge of a building could harbour their breeding grounds, people continue to visit this an interesting bird. Remember to try to leaving the square remarkable square. see the environment that you find devoid of owls.

yourself in how a bird would – as a potential feeding, nesting or roosting site.

Short-eared Owls are here, too

Just prior to dusk, the birds become restless, sometimes sallying forth in a low floppy circular flight almost as though they were stretching their wings before the night’s hunt in the outlying rural areas. It is possible, even in the half-light to identify the handful of Short-eared Owls that are sometimes hidden among them. These are birds that have recently learned to

OTHER SITES Rusanda Lake and Park Some 20 miles south-west of the Kikinda catchment area is Rusanda, where you will find an ancient oxbow lake on the Tisa River, itself a tributary of the mighty Danube. The water is quite shallow and is the saltiest in the whole of the Pannonian Basin. It is rich in zooplankton that proves a very attractive food source to Cranes, waterfowl and waders like Ruff and Wood Sandpiper and breeding Black-winged Stilt. Adjoining the lake is the mainly wooded Rusanda Park. Expect to see breeding Rook, Long-eared Owl (yes, even more of them!), Kestrel and a couple of pairs of Red-footed Falcon. WEBSITES David stayed at Hotel Kastel Eckta kastelecka.com

And his guide Milan Ružić

Y KIKINDA TOWN... is what Frank Sinatra could have sung, had he hailed from this small town in northern Serbia, a stone’s throw from neighbouring Romania. However, back in 1964, when My Kinda Town first came out, Kikinda was not on the urban birding radar. In fact, it was barely on any radar at all. It was just an average small Yugoslavian town, or so it seemed. About 10 years ago, Serbian ornithologist Milan Ruži´c stumbled upon the fact that large numbers of Long-eared Owls were roosting in urban areas from Belgrade right up to the northern borders with Romania and Hungary. Along with a small party of volunteers, he set upon a crusade to chart the roosts and count the numbers of individuals. Over the ensuing years, he calculated that upwards of 20,000 birds were regularly wintering in the region. Even in bustling Belgrade, roosts of up to 200 birds were using the trees that butted up against the government buildings, set in a lightly wooded parkland area close to the Danube. The first question I asked was how come we in the UK were unaware of these phenomenal Harry Potteresque events. Milan explained that he and his colleagues were too busy counting owls and, more importantly, convincing the locals that the birds were not spectres of doom to be murdered on sight but instead, a great source of ecotourism revenue. Very good numbers of Long-eared Owls winter in the Balkan region, as visitors to Hungary or Bulgaria will testify, the town’s main square, which is also famous for but the epicentre certainly seems to be in northern housing the remains of a locally excavated 500,000 Serbia. There is a very rich supply of prey in the shape year-old Mammoth, hosts the biggest gathering of of tasty rodents, encouraged by the traditional LEOs in the country. From mid-December until farming methods. As such, grain is liberally left the end of February, upwards of 800 birds on the ground, crops are only half harvested DAVID can assemble in the trees that line the and the barns often have no walls. It is a SAYS square. The birds snooze during the day, veritable bonanza for a host of predators. When visiting owl wearily gazing down at their growing It was the small towns and villages roosts please put the number of admirers. Unlike roosts that interested Milan the most. He welfare of the birds first, in the UK, that are tiny in found that some of them had especially if you wish to photograph comparison and contain birds spectacular numbers of Longthem. They are easily disturbed, so usually roosting at head height, the eared Owls that congregated in do not approach too quickly owls in Serbia go for loftier resting or too closely and if they places. So it is a case of looking up and seem uneasy, From mid-December craning your neck. Plus, for every bird you back off. count, add another two that will be discretely until the end of February, perched behind the foliage.