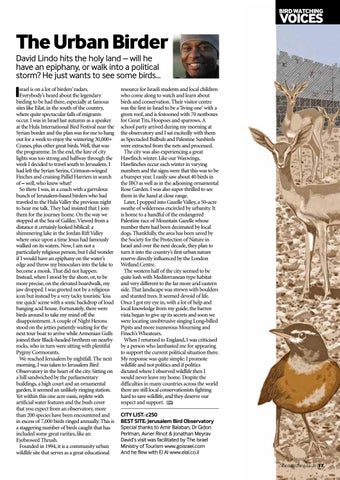 David Lindo hits the holy land – will he have an epiphany, or walk into a political storm? He just wants to see some birds…

srael is on a lot of birders’ radars. Everybody’s heard about the legendary birding to be had there, especially at famous sites like Eilat, in the south of the country, where quite spectacular falls of migrants occur. I was in Israel last autumn as a speaker at the Hula International Bird Festival near the Syrian border and the plan was for me to hang out for a week to enjoy the wintering 30,000+ Cranes, plus other great birds. Well, that was the programme. In the end, the lure of city lights was too strong and halfway through the week I decided to travel south to Jerusalem. I had left the Syrian Serins, Crimson-winged Finches and cruising Pallid Harriers in search of – well, who knew what? So there I was, in a coach with a garrulous bunch of Jerusalem-based birders who had traveled to the Hula Valley the previous night to hear me talk. They had insisted that I join them for the journey home. On the way we stopped at the Sea of Galilee. Viewed from a distance it certainly looked biblical: a shimmering lake in the Jordan Rift Valley where once upon a time Jesus had famously walked on its waters. Now, I am not a particularly religious person, but I did wonder if I would have an epiphany on the water’s edge and throw my binoculars into the lake to become a monk. That did not happen. Instead, when I stood by the shore, or, to be more precise, on the elevated boardwalk, my jaw dropped. I was greeted not by a religious icon but instead by a very tacky touristic ‘kiss me quick’ scene with a sonic backdrop of loud banging acid house. Fortunately, there were birds around to take my mind off the disappointment. A couple of Night Herons stood on the jetties patiently waiting for the next tour boat to arrive while Armenian Gulls joined their Black-headed brethren on nearby rocks, who in turn were sitting with plentiful Pygmy Cormorants. We reached Jerusalem by nightfall. The next morning, I was taken to Jerusalem Bird Observatory in the heart of the city. Sitting on a hill sandwiched by the parliamentary buildings, a high court and an ornamental garden, it seemed an unlikely ringing station. Yet within this one acre oasis, replete with artificial water features and the bush cover that you expect from an observatory, more than 200 species have been encountered and in excess of 7,000 birds ringed annually. This is a staggering number of birds caught that has included some great rarities, like an Eyebrowed Thrush. Founded in 1994, it is a community urban wildlife site that serves as a great educational

resource for Israeli students and local children who come along to watch and learn about birds and conservation. Their visitor centre was the first in Israel to be a ‘living one’ with a green roof, and is festooned with 70 nestboxes for Great Tits, Hoopoes and sparrows. A school party arrived during my morning at the observatory and I sat excitedly with them as Spectacled Bulbuls and Palestine Sunbirds were extracted from the nets and processed. The city was also experiencing a great Hawfinch winter. Like our Waxwings, Hawfinches occur each winter in varying numbers and the signs were that this was to be a bumper year. I easily saw about 40 birds in the JBO as well as in the adjoining ornamental Rose Garden. I was also super thrilled to see them in the hand at close range. Later, I popped into Gazelle Valley, a 50-acre swathe of wilderness encircled by urbanity. It is home to a handful of the endangered Palestine race of Mountain Gazelle whose number there had been decimated by local dogs. Thankfully, the area has been saved by the Society for the Protection of Nature in Israel and over the next decade, they plan to turn it into the country’s first urban nature reserve directly influenced by the London Wetland Centre. The western half of the city seemed to be quite lush with Mediterranean type habitat and very different to the far more arid eastern side. That landscape was strewn with boulders and stunted trees. It seemed devoid of life. Once I got my eye in, with a lot of help and local knowledge from my guide, the barren vista began to give up its secrets and soon we were locating unobtrusive singing Long-billed Pipits and more numerous Mourning and Finsch’s Wheatears. When I returned to England, I was criticised by a person who lambasted me for appearing to support the current political situation there. My response was quite simple: I promote wildlife and not politics and if politics dictated where I observed wildlife then I would never leave my home. Despite the difficulties in many countries across the world there are still local conservationists fighting hard to save wildlife, and they deserve our respect and support. CITY LIST: c250 BEST SITE: Jerusalem Bird Observatory Special thanks to Amir Balaban, Dr Gidon Perlman, Avner Rinot & Jonathan Meyrav David’s visit was facilitated by The Israel Ministry of Tourism www.goisrael.com And he flew with El Al www.elal.co.il birdwatching.co.uk 17