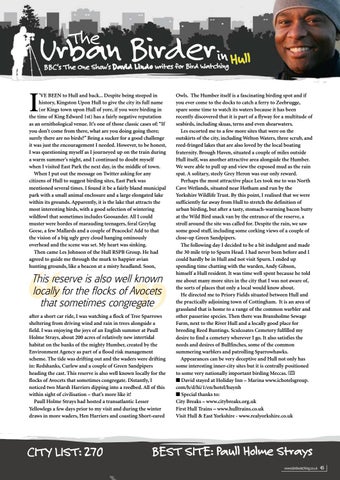 ’ve been to Hull and back... Despite being steeped in history, Kingston Upon Hull to give the city its full name (or Kings town upon Hull of yore, if you were birding in the time of King Edward 1st) has a fairly negative reputation as an ornithological venue. It’s one of those classic cases of: “If you don’t come from there, what are you doing going there; surely there are no birds?” Being a sucker for a good challenge it was just the encouragement I needed. However, to be honest, I was questioning myself as I journeyed up on the train during a warm summer’s night, and I continued to doubt myself when I visited East Park the next day, in the middle of town. When I put out the message on Twitter asking for any citizens of Hull to suggest birding sites, East Park was mentioned several times. I found it be a fairly bland municipal park with a small animal enclosure and a large elongated lake within its grounds. Apparently, it is the lake that attracts the most interesting birds, with a good selection of wintering wildfowl that sometimes includes Goosander. All I could muster were hordes of marauding teenagers, feral Greylag Geese, a few Mallards and a couple of Peacocks! Add to that the vision of a big ugly grey cloud hanging ominously overhead and the scene was set. My heart was sinking. Then came Les Johnson of the Hull RSPB Group. He had agreed to guide me through the murk to happier avian hunting grounds, like a beacon at a misty headland. Soon,

Owls. The Humber itself is a fascinating birding spot and if you ever come to the docks to catch a ferry to Zeebrugge, spare some time to watch its waters because it has been recently discovered that it is part of a flyway for a multitude of seabirds, including skuas, terns and even shearwaters. Les escorted me to a few more sites that were on the outskirts of the city, including Welton Waters, three scrub, and reed-fringed lakes that are also loved by the local boating fraternity. Brough Haven, situated a couple of miles outside Hull itself, was another attractive area alongside the Humber. We were able to pull up and view the exposed mud as the rain spat. A solitary, steely Grey Heron was our only reward. Perhaps the most attractive place Les took me to was North Cave Wetlands, situated near Hotham and run by the Yorkshire Wildlife Trust. By this point, I realised that we were sufficiently far away from Hull to stretch the definition of urban birding, but after a tasty, stomach-warming bacon butty at the Wild Bird snack van by the entrance of the reserve, a stroll around the site was called for. Despite the rain, we saw some good stuff, including some corking views of a couple of close-up Green Sandpipers. The following day I decided to be a bit indulgent and made the 30 mile trip to Spurn Head. I had never been before and I could hardly be in Hull and not visit Spurn. I ended up spending time chatting with the warden, Andy Gibson, himself a Hull resident. It was time well spent because he told me about many more sites in the city that I was not aware of, the sorts of places that only a local would know about. He directed me to Priory Fields situated between Hull and the practically adjoining town of Cottingham. It is an area of grassland that is home to a range of the common warbler and other passerine species. Then there was Bransholme Sewage Farm, next to the River Hull and a locally good place for breeding Reed Buntings. Sculcoates Cemetery fulfilled my desire to find a cemetery wherever I go. It also satisfies the needs and desires of Bullfinches, some of the common summering warblers and patrolling Sparrowhawks. Appearances can be very deceptive and Hull not only has some interesting inner-city sites but it is centrally positioned to some very nationally important birding Meccas. ■ David stayed at Holiday Inn – Marina www.ichotelsgroup. com/h/d/hi/1/en/hotel/huynh ■ Special thanks to: City Breaks – www.citybreaks.org.uk First Hull Trains – www.hulltrains.co.uk Visit Hull & East Yorkshire - www.realyorkshire.co.uk