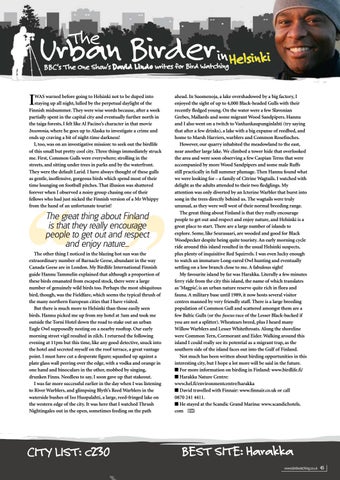 was warned before going to Helsinki not to be duped into staying up all night, lulled by the perpetual daylight of the Finnish midsummer. They were wise words because, after a week partially spent in the capital city and eventually further north in the taiga forests, I felt like Al Pacino’s character in that movie Insomnia, where he goes up to Alaska to investigate a crime and ends up craving a bit of night-time darkness! I, too, was on an investigative mission: to seek out the birdlife of this small but pretty cool city. Three things immediately struck me. First, Common Gulls were everywhere; strolling in the streets, and sitting under trees in parks and by the waterfront. They were the default Larid. I have always thought of these gulls as gentle, inoffensive, gorgeous birds which spend most of their time lounging on football pitches. That illusion was shattered forever when I observed a noisy group chasing one of their fellows who had just nicked the Finnish version of a Mr Whippy from the hand of an unfortunate tourist!

The great thing about Finland is that they really encourage people to get out and respect and enjoy nature... The other thing I noticed in the blazing hot sun was the extraordinary number of Barnacle Geese, abundant in the way Canada Geese are in London. My Birdlife International Finnish guide Hannu Tammelin explained that although a proportion of these birds emanated from escaped stock, there were a large number of genuinely wild birds too. Perhaps the most ubiquitous bird, though, was the Fieldfare, which seems the typical thrush of the many northern European cities that I have visited. But there is much more to Helsinki than those easily seen birds. Hannu picked me up from my hotel at 3am and took me outside the Torni Hotel down the road to stake out an urban Eagle Owl supposedly nesting on a nearby rooftop. Our early morning street vigil resulted in zilch. I returned the following evening at 11pm but this time, like any good detective, snuck into the hotel and secreted myself on the roof terrace, a great vantage point. I must have cut a desperate figure; squashed up against a plate glass wall peering over the edge, with a vodka and orange in one hand and binoculars in the other, mobbed by singing, drunken Finns. Needless to say, I soon gave up that stakeout. I was far more successful earlier in the day when I was listening to River Warblers, and glimpsing Blyth’s Reed Warblers in the waterside bushes of Iso Huopalahti, a large, reed-fringed lake on the western edge of the city. It was here that I watched Thrush Nightingales out in the open, sometimes feeding on the path

ahead. In Suomenoja, a lake overshadowed by a big factory, I enjoyed the sight of up to 4,000 Black-headed Gulls with their recently fledged young. On the water were a few Slavonian Grebes, Mallards and some migrant Wood Sandpipers. Hannu and I also went on a twitch to Vanhankaupunginlahti (try saying that after a few drinks), a lake with a big expanse of reedbed, and home to Marsh Harriers, warblers and Common Rosefinches. However, our quarry inhabited the meadowland to the east, near another large lake. We climbed a tower hide that overlooked the area and were soon observing a few Caspian Terns that were accompanied by more Wood Sandpipers and some male Ruffs still practically in full summer plumage. Then Hannu found what we were looking for – a family of Citrine Wagtails. I watched with delight as the adults attended to their two fledglings. My attention was only diverted by an Icterine Warbler that burst into song in the trees directly behind us. The wagtails were truly unusual, as they were well west of their normal breeding range. The great thing about Finland is that they really encourage people to get out and respect and enjoy nature, and Helsinki is a great place to start. There are a large number of islands to explore. Some, like Seurasaari, are wooded and good for Black Woodpecker despite being quite touristy. An early morning cycle ride around this island resulted in the usual Helsinki suspects, plus plenty of inquisitive Red Squirrels. I was even lucky enough to watch an immature Long-eared Owl hunting and eventually settling on a low branch close to me. A fabulous sight! My favourite island by far was Harakka. Literally a few minutes ferry ride from the city this island, the name of which translates as ‘Magpie’, is an urban nature reserve quite rich in flora and fauna. A military base until 1989, it now hosts several visitor centres manned by very friendly staff. There is a large breeding population of Common Gull and scattered amongst them are a few Baltic Gulls (or the fuscus race of the Lesser Black-backed if you are not a splitter). Wheatears breed, plus I heard many Willow Warblers and Lesser Whitethroats. Along the shoreline were Common Tern, Cormorant and Eider. Walking around this island I could really see its potential as a migrant trap, as the southern side of the island faces out into the Gulf of Finland. Not much has been written about birding opportunities in this interesting city, but I hope a lot more will be said in the future. ■ For more information on birding in Finland: www.birdlife.fi/ ■ Harakka Nature Centre: www.hel.fi/environmentcentre/harakka ■ David travelled with Finnair: www.finnair.co.uk or call 0870 241 4411. ■ He stayed at the Scandic Grand Marina: www.scandichotels. com