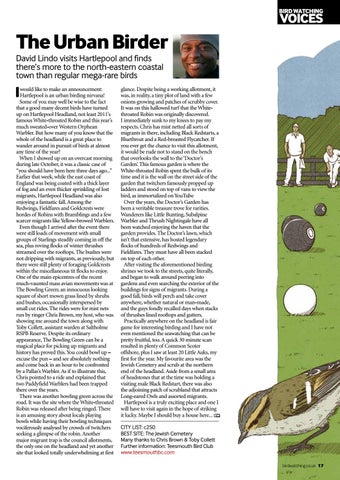 would like to make an announcement: Hartlepool is an urban birding nirvana! Some of you may well be wise to the fact that a good many decent birds have turned up on Hartlepool Headland, not least 2011’s famous White-throated Robin and this year’s much sweated-over Western Orphean Warbler. But how many of you know that the whole of the headland is a great place to wander around in pursuit of birds at almost any time of the year? When I showed up on an overcast morning during late October, it was a classic case of “you should have been here three days ago...” Earlier that week, while the east coast of England was being coated with a thick layer of fog and an even thicker sprinkling of lost migrants, Hartlepool Headland was also enjoying a fantastic fall. Among the Redwings, Fieldfares and Goldcrests were hordes of Robins with Bramblings and a few scarcer migrants like Yellow-browed Warblers. Even though I arrived after the event there were still loads of movement with small groups of Starlings steadily coming in off the sea, plus roving flocks of winter thrushes streamed over the rooftops. The bushes were not dripping with migrants, as previously, but there were still plenty of foraging Goldcrests within the miscellaneous tit flocks to enjoy. One of the main epicentres of the recent much-vaunted mass avian movements was at The Bowling Green; an innocuous looking square of short mown grass lined by shrubs and bushes, occasionally interspersed by small cut rides. The rides were for mist nets run by ringer Chris Brown, my host, who was showing me around the town along with Toby Collett, assistant warden at Saltholme RSPB Reserve. Despite its ordinary appearance, The Bowling Green can be a magical place for picking up migrants and history has proved this. You could bowl up – excuse the pun – and see absolutely nothing and come back in an hour to be confronted by a Pallas’s Warbler. As if to illustrate this, Chris pointed to a ride and explained that two Paddyfield Warblers had been trapped there over the years. There was another bowling green across the road. It was the site where the White-throated Robin was released after being ringed. There is an amusing story about locals playing bowls while having their bowling techniques vociferously analysed by crowds of twitchers seeking a glimpse of the robin. Another major migrant trap is the council allotments, the only one on the headland and yet another site that looked totally underwhelming at first

glance. Despite being a working allotment, it was, in reality, a tiny plot of land with a few onions growing and patches of scrubby cover. It was on this hallowed turf that the Whitethroated Robin was originally discovered. I immediately sunk to my knees to pay my respects. Chris has mist netted all sorts of migrants in there, including Black Redstarts, a Bluethroat and a Red-breasted Flycatcher. If you ever get the chance to visit this allotment, it would be rude not to stand on the bench that overlooks the wall to the ‘Doctor’s Garden’. This famous garden is where the White-throated Robin spent the bulk of its time and it is the wall on the street side of the garden that twitchers famously propped up ladders and stood on top of vans to view the bird, as immortalized on YouTube Over the years, the Doctor’s Garden has been a veritable treasure trove for rarities. Wanderers like Little Bunting, Subalpine Warbler and Thrush Nightingale have all been watched enjoying the haven that the garden provides. The Doctor’s lawn, which isn’t that extensive, has hosted legendary flocks of hundreds of Redwings and Fieldfares. They must have all been stacked on top of each other. After visiting the aforementioned birding shrines we took to the streets, quite literally, and began to walk around peering into gardens and even searching the exterior of the buildings for signs of migrants. During a good fall, birds will perch and take cover anywhere, whether natural or man-made, and the guys fondly recalled days when stacks of thrushes lined rooftops and gutters. Practically anywhere on the headland is fair game for interesting birding and I have not even mentioned the seawatching that can be pretty fruitful, too. A quick 30 minute scan resulted in plenty of Common Scoter offshore, plus I saw at least 20 Little Auks, my first for the year. My favourite area was the Jewish Cemetery and scrub at the northern end of the headland. Aside from a small area of headstones that at the time was holding a visiting male Black Redstart, there was also the adjoining patch of scrubland that attracts Long-eared Owls and assorted migrants. Hartlepool is a truly exciting place and one I will have to visit again in the hope of striking it lucky. Maybe I should buy a house here... CITY LIST: c250 BEST SITE: The Jewish Cemetery Many thanks to Chris Brown & Toby Collett Further information: Teesmouth Bird Club www.teesmouthbc.com birdwatching.co.uk 17