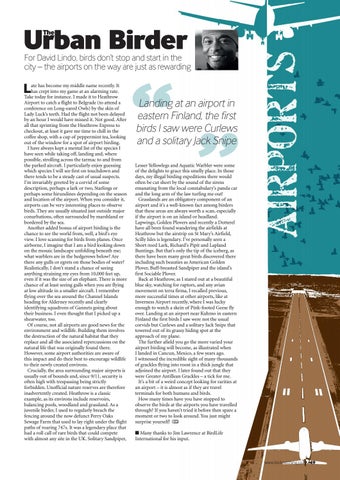 For David Lindo, birds don’t stop and start in the city – the airports on the way are just as rewarding

ate has become my middle name recently. It has crept into my game at an alarming rate. Take today for instance. I made it to Heathrow Airport to catch a flight to Belgrade (to attend a conference on Long-eared Owls) by the skin of Lady Luck’s teeth. Had the flight not been delayed by an hour I would have missed it. Not good. After all that sprinting from the Heathrow Express to checkout, at least it gave me time to chill in the coffee shop, with a cup of peppermint tea, looking out of the window for a spot of airport birding. I have always kept a mental list of the species I have seen while taking off, landing and, where possible, strolling across the tarmac to and from the parked aircraft. I particularly enjoy guessing which species I will see first on touchdown and there tends to be a steady cast of usual suspects. I’m invariably greeted by a corvid of some description, perhaps a lark or two, Starlings or perhaps some hirundines depending on the season and location of the airport. When you consider it, airports can be very interesting places to observe birds. They are usually situated just outside major conurbations, often surrounded by marshland or bordered by the sea. Another added bonus of airport birding is the chance to see the world from, well, a bird’s eye view. I love scanning for birds from planes. Once airborne, I imagine that I am a bird looking down on the mosaic landscape unfolding beneath me; what warblers are in the hedgerows below? Are there any gulls or egrets on those bodies of water? Realistically, I don’t stand a chance of seeing anything straining my eyes from 10,000 feet up, even if it was the size of an elephant. There is more chance of at least seeing gulls when you are flying at low altitude in a smaller aircraft. I remember flying over the sea around the Channel Islands heading for Alderney recently and clearly identifying squadrons of Gannets going about their business. I even thought that I picked up a shearwater, too. Of course, not all airports are good news for the environment and wildlife. Building them involves the destruction of the natural habitat that they replace and all the associated repercussions on the natural life that was originally found there. However, some airport authorities are aware of this impact and do their best to encourage wildlife to their newly created environs. Crucially, the area surrounding major airports is usually out of bounds and, since 9/11, security is often high with trespassing being strictly forbidden. Unofficial nature reserves are therefore inadvertently created. Heathrow is a classic example, as its environs include reservoirs, balancing pools, woodland and grassland. As a juvenile birder, I used to regularly breach the fencing around the now defunct Perry Oaks Sewage Farm that used to lay right under the flight paths of roaring 747s. It was a legendary place that had a roll call of rare birds that could compete with almost any site in the UK. Solitary Sandpiper,

Landing at an airport in eastern Finland, the first birds I saw were Curlews and a solitary Jack Snipe Lesser Yellowlegs and Aquatic Warbler were some of the delights to grace this smelly place. In those days, my illegal birding expeditions there would often be cut short by the sound of the sirens emanating from the local constabulary’s panda car and the long arm of the law turfing me out! Grasslands are an obligatory component of an airport and it’s a well-known fact among birders that these areas are always worth a scan, especially if the airport is on an island or headland. Lapwings, Golden Plovers and recently a Dotterel have all been found wandering the airfields at Heathrow but the airstrip on St Mary’s Airfield, Scilly Isles is legendary. I’ve personally seen a Short-toed Lark, Richard’s Pipit and Lapland Buntings. But that’s only the tip of the iceberg, as there have been many great birds discovered there including such beauties as American Golden Plover, Buff-breasted Sandpiper and the island’s first Sociable Plover. Back at Heathrow, as I stared out at a beautiful blue sky, watching for raptors, and any avian movement on terra firma, I recalled previous, more successful times at other airports, like at Inverness Airport recently, where I was lucky enough to watch a skein of Pink-footed Geese fly over. Landing at an airport near Kuhmo in eastern Finland the first birds I saw were not the usual corvids but Curlews and a solitary Jack Snipe that towered out of its grassy hiding spot at the approach of my plane. The further afield you go the more varied your airport birding will become, as illustrated when I landed in Cancun, Mexico, a few years ago. I witnessed the incredible sight of many thousands of grackles flying into roost in a thick jungle that adjoined the airport. I later found out that they were Greater Antillean Grackles – a tick for me. It’s a bit of a weird concept looking for rarities at an airport – it is almost as if they are travel terminals for both humans and birds. How many times have you have stopped to observe the birds at the airports you have travelled through? If you haven’t tried it before then spare a moment or two to look around. You just might surprise yourself! ■ Many thanks to Jim Lawrence at BirdLife International for his input.