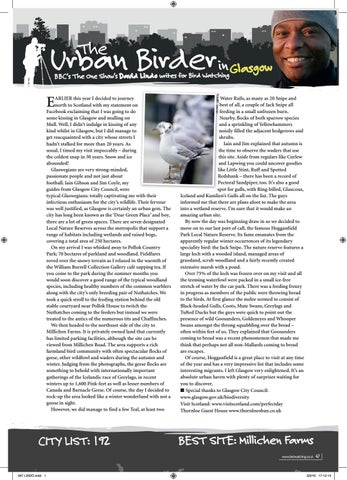 ARLIER this year I decided to journey north to Scotland with my statement on Facebook exclaiming that I was going to do some kissing in Glasgow and mulling on Mull. Well, I didn’t indulge in kissing of any kind whilst in Glasgow, but I did manage to get reacquainted with a city whose streets I hadn’t stalked for more than 20 years. As usual, I timed my visit impeccably – during the coldest snap in 30 years. Snow and ice abounded! Glaswegians are very strong-minded, passionate people and not just about football. Iain Gibson and Jim Coyle, my guides from Glasgow City Council, were typical Glaswegians: totally captivating me with their infectious enthusiasm for the city’s wildlife. Their fervour was well justified, as Glasgow is certainly an urban gem. The city has long been known as the ‘Dear Green Place’ and boy, there are a lot of green spaces. There are seven designated Local Nature Reserves across the metropolis that support a range of habitats including wetlands and raised bogs, covering a total area of 250 hectares. On my arrival I was whisked away to Pollok Country Park; 70 hectares of parkland and woodland. Fieldfares roved over the snowy terrain as I relaxed in the warmth of the William Burrell Collection Gallery café supping tea. If you come to the park during the summer months you would soon discover a good range of the typical woodland species, including healthy numbers of the common warblers along with the city’s only breeding pair of Nuthatches. We took a quick stroll to the feeding station behind the old stable courtyard near Pollok House to twitch the Nuthatches coming to the feeders but instead we were treated to the antics of the numerous tits and Chaffinches. We then headed to the northeast side of the city to Millichen Farms. It is privately owned land that currently has limited parking facilities, although the site can be viewed from Millichen Road. The area supports a rich farmland bird community with often spectacular flocks of geese, other wildfowl and waders during the autumn and winter. Judging from the photographs, the geese flocks are something to behold with internationally important gatherings of the Icelandic race of Greylags, in recent winters up to 1,600 Pink-feet as well as lesser numbers of Canada and Barnacle Geese. Of course, the day I decided to rock-up the area looked like a winter wonderland with not a goose in sight. However, we did manage to find a few Teal, at least two

Water Rails, as many as 20 Snipe and best of all, a couple of Jack Snipe all feeding in a small unfrozen burn. Nearby, flocks of both sparrow species and a sprinkling of Yellowhammers noisily filled the adjacent hedgerows and shrubs. Iain and Jim explained that autumn is the time to observe the waders that use this site. Aside from regulars like Curlew and Lapwing you could uncover goodies like Little Stint, Ruff and Spotted Redshank – there has been a record of Pectoral Sandpiper, too. It’s also a good spot for gulls, with Ring-billed, Glaucous, Iceland and Kumlien’s Gulls all on the list. The guys informed me that there are plans afoot to make the area into a wetland reserve. I’m sure that it would make an amazing urban site. By now the day was beginning draw in so we decided to move on to our last port of call, the famous Hogganfield Park Local Nature Reserve. Its fame emanates from the apparently regular winter occurrences of its legendary speciality bird: the Jack Snipe. The nature reserve features a large loch with a wooded island, managed areas of grassland, scrub woodland and a fairly recently created extensive marsh with a pond. Over 75% of the loch was frozen over on my visit and all the teeming waterfowl were packed in a small ice-free stretch of water by the car park. There was a feeding frenzy in progress as members of the public were throwing bread to the birds. At first glance the melee seemed to consist of Black-headed Gulls, Coots, Mute Swans, Greylags and Tufted Ducks but the guys were quick to point out the presence of wild Goosanders, Goldeneyes and Whooper Swans amongst the throng squabbling over the bread – often within feet of us. They explained that Goosanders coming to bread was a recent phenomenon that made me think that perhaps not all non-Mallards coming to bread are escapes. Of course, Hogganfield is a great place to visit at any time of the year and has a very impressive list that includes some interesting migrants. I left Glasgow very enlightened. It’s an absolute urban haven with plenty of surprises waiting for you to discover. ■ Special thanks to Glasgow City Council: www.glasgow.gov.uk/biodiversity Visit Scotland: www.visitscotland.com/perfectday Thornloe Guest House www.thornloeoban.co.uk