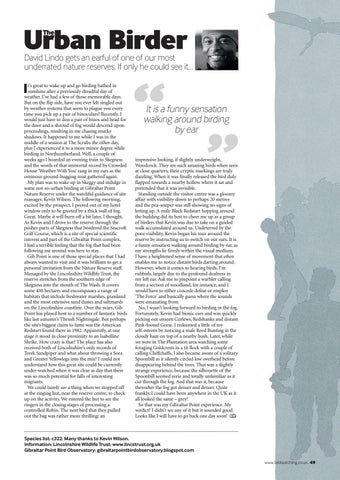 David Lindo gets an earful of one of our most underrated nature reserves. If only he could see it…

t’s great to wake up and go birding bathed in sunshine after a previously dreadful day of weather. I’ve had a few of those memorable days. But on the flip side, have you ever felt singled out by weather systems that seem to plague you every time you pick up a pair of binoculars? Recently, I would just have to don a pair of binos and head for the door and a shroud of fog would descend upon proceedings, resulting in me chasing murky shadows. It happened to me while I was in the middle of a session at The Scrubs the other day, plus I experienced it to a more minor degree while birding in Northumberland. Well, a couple of weeks ago I boarded an evening train to Skegness and the words of that immortal record by Crowded House ‘Weather With You’ rang in my ears as the ominous ground-hugging mist gathered again. My plan was to wake up in Skeggy and indulge in some not-so-urban birding at Gibraltar Point Nature Reserve under the watchful guidance of site manager, Kevin Wilson. The following morning, excited by the prospect, I peered out of my hotel window only to be greeted by a thick wall of fog. Great. Maybe it will burn off a bit later, I thought. As Kevin and I drove to the reserve through the posher parts of Skegness that bordered the Seacroft Golf Course, which is a site of special scientific interest and part of the Gibraltar Point complex, I had a terrible feeling that the fog that had been following me around was here to stay. Gib Point is one of those special places that I had always wanted to visit and it was brilliant to get a personal invitation from the Nature Reserve staff. Managed by the Lincolnshire Wildlife Trust, the reserve stretches from the southern edge of Skegness into the mouth of The Wash. It covers some 430 hectares and encompasses a range of habitats that include freshwater marshes, grassland and the most extensive sand dunes and saltmarsh on the Lincolnshire coastline. Over the years, Gib Point has played host to a number of fantastic birds like last autumn’s Thrush Nightingale. But perhaps the site’s biggest claim to fame was the American Redstart found there in 1982. Apparently, at one stage it stood in close proximity to an Isabelline Shrike. How crazy is that? The place has also received both of Lincolnshire’s only records of Terek Sandpiper and what about throwing a Sora and Greater Yellowlegs into the mix? I could not understand how this great site could be currently under-watched when it was clear as day that there was so much potential for falls of interesting migrants. We could barely see a thing when we stopped off at the ringing hut, near the reserve centre, to check up on the activity. We entered the hut to see the ringers in the closing stages of processing a controlled Robin. The next bird that they pulled out the bag was rather more thrilling: an

It is a funny sensation walking around birding by ear impressive looking, if slightly underweight, Woodcock. They are such amazing birds when seen at close quarters; their cryptic markings are truly dazzling. When it was finally released the bird duly flapped towards a nearby hollow where it sat and pretended that it was invisible. Standing outside the visitor centre was a gloomy affair with visibility down to perhaps 20 metres and the pea-souper was still showing no signs of letting up. A male Black Redstart hopping around the building did its best to cheer me up as a group of birders that Kevin was due to take on a guided walk accumulated around us. Undeterred by the poor visibility, Kevin began his tour around the reserve by instructing us to switch on our ears. It is a funny sensation walking around birding by ear, as my strengths lie firmly within the visual medium. I have a heightened sense of movement that often enables me to notice distant birds darting around. However, when it comes to hearing birds, I’m rubbish, largely due to the profound deafness in my left ear. Ask me to pinpoint a warbler calling from a section of woodland, for instance, and I would have to either concede defeat or employ ‘The Force’ and basically guess where the sounds were emanating from. No, I wasn’t looking forward to birding in the fog. Fortunately, Kevin had bionic ears and was quickly picking out unseen Curlews, Redshanks and distant Pink-footed Geese. I redeemed a little of my self-esteem by noticing a male Reed Bunting in the cloudy haze on top of a nearby bush. Later, while we were in The Plantation area watching some foraging Goldcrests in a tit flock with a couple of calling Chiffchaffs, I also became aware of a solitary Spoonbill as it silently circled low overhead before disappearing behind the trees. That was a slightly strange experience, because the silhouette of the Spoonbill seemed eerie and totally unfamiliar as it cut through the fog. And that was it, because thereafter the fog got denser and denser. Quite frankly, I could have been anywhere in the UK as it all looked the same – grey! So that was my Gibraltar Point experience. My verdict? I didn’t see any of it but it sounded good. Looks like I will have to go back one day soon!