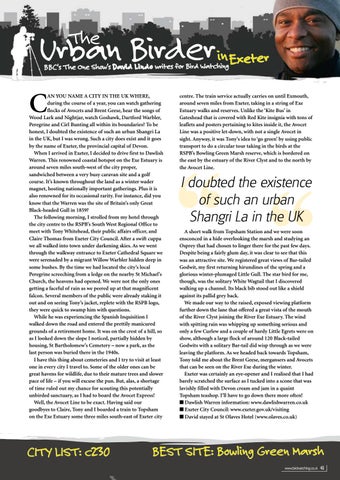 an you name a city in the UK where, during the course of a year, you can watch gathering flocks of Avocets and Brent Geese, hear the songs of Wood Lark and Nightjar, watch Goshawk, Dartford Warbler, Peregrine and Cirl Bunting all within its boundaries? To be honest, I doubted the existence of such an urban Shangri La in the UK, but I was wrong. Such a city does exist and it goes by the name of Exeter, the provincial capital of Devon. When I arrived in Exeter, I decided to drive first to Dawlish Warren. This renowned coastal hotspot on the Exe Estuary is around seven miles south-west of the city proper, sandwiched between a very busy caravan site and a golf course. It’s known throughout the land as a winter wader magnet, hosting nationally important gatherings. Plus it is also renowned for its occasional rarity. For instance, did you know that the Warren was the site of Britain’s only Great Black-headed Gull in 1859? The following morning, I strolled from my hotel through the city centre to the RSPB’s South West Regional Office to meet with Tony Whitehead, their public affairs officer, and Claire Thomas from Exeter City Council. After a swift cuppa we all walked into town under darkening skies. As we went through the walkway entrance to Exeter Cathedral Square we were serenaded by a migrant Willow Warbler hidden deep in some bushes. By the time we had located the city’s local Peregrine screeching from a ledge on the nearby St Michael’s Church, the heavens had opened. We were not the only ones getting a faceful of rain as we peered up at that magnificent falcon. Several members of the public were already staking it out and on seeing Tony’s jacket, replete with the RSPB logo, they were quick to swamp him with questions. While he was experiencing the Spanish Inquisition I walked down the road and entered the prettily manicured grounds of a retirement home. It was on the crest of a hill, so as I looked down the slope I noticed, partially hidden by housing, St Bartholomew’s Cemetery – now a park, as the last person was buried there in the 1940s. I have this thing about cemeteries and I try to visit at least one in every city I travel to. Some of the older ones can be great havens for wildlife, due to their mature trees and slower pace of life – if you will excuse the pun. But, alas, a shortage of time ruled out my chance for scouting this potentially unbirded sanctuary, as I had to board the Avocet Express! Well, the Avocet Line to be exact. Having said our goodbyes to Claire, Tony and I boarded a train to Topsham on the Exe Estuary some three miles south-east of Exeter city

centre. The train service actually carries on until Exmouth, around seven miles from Exeter, taking in a string of Exe Estuary walks and reserves. Unlike the ‘Kite Bus’ in Gateshead that is covered with Red Kite insignia with tons of leaflets and posters pertaining to kites inside it, the Avocet Line was a positive let-down, with not a single Avocet in sight. Anyway, it was Tony’s idea to ‘go green’ by using public transport to do a circular tour taking in the birds at the RSPB’s Bowling Green Marsh reserve, which is bordered on the east by the estuary of the River Clyst and to the north by the Avocet Line.

I doubted the existence of such an urban Shangri La in the UK A short walk from Topsham Station and we were soon ensconced in a hide overlooking the marsh and studying an Osprey that had chosen to linger there for the past few days. Despite being a fairly glum day, it was clear to see that this was an attractive site. We registered great views of Bar-tailed Godwit, my first returning hirundines of the spring and a glorious winter-plumaged Little Gull. The star bird for me, though, was the solitary White Wagtail that I discovered walking up a channel. Its black bib stood out like a shield against its pallid grey back. We made our way to the raised, exposed viewing platform further down the lane that offered a great vista of the mouth of the River Clyst joining the River Exe Estuary. The wind with spitting rain was whipping up something serious and only a few Curlew and a couple of hardy Little Egrets were on show, although a large flock of around 120 Black-tailed Godwits with a solitary Bar-tail did wisp through as we were leaving the platform. As we headed back towards Topsham, Tony told me about the Brent Geese, mergansers and Avocets that can be seen on the River Exe during the winter. Exeter was certainly an eye-opener and I realised that I had barely scratched the surface as I tucked into a scone that was lavishly filled with Devon cream and jam in a quaint Topsham teashop. I’ll have to go down there more often! ■ Dawlish Warren information: www.dawlishwarren.co.uk ■ Exeter City Council: www.exeter.gov.uk/visiting ■ David stayed at St Olaves Hotel (www.olaves.co.uk)