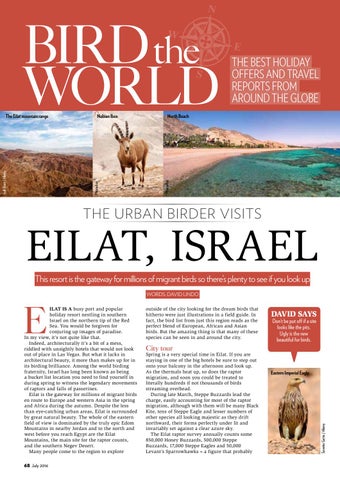 THE BEST HOLIDAY OFFERS AND TRAVEL REPORTS FROM AROUND THE GLOBE

EILAT, ISRAEL This resort is the gateway for millions of migrant birds so there’s plenty to see if you look up

outside of the city looking for the dream birds that hitherto were just illustrations in a field guide. In fact, the bird list from just this region reads as the perfect blend of European, African and Asian birds. But the amazing thing is that many of these species can be seen in and around the city.

DAVID SAYS Don’t be put off if a site looks like the pits. Ugly is the new beautiful for birds.

Spring is a very special time in Eilat. If you are staying in one of the big hotels be sure to step out onto your balcony in the afternoon and look up. As the thermals heat up, so does the raptor migration, and soon you could be treated to literally hundreds if not thousands of birds streaming overhead. During late March, Steppe Buzzards lead the charge, easily accounting for most of the raptor migration, although with them will be many Black Kite, tens of Steppe Eagle and lesser numbers of other species all looking majestic as they drift northward, their forms perfectly under lit and invariably set against a clear azure sky. The Eilat raptor survey annually counts some 850,000 Honey Buzzards, 500,000 Steppe Buzzards, 17,000 Steppe Eagles and 50,000 Levant’s Sparrowhawks – a figure that probably

ILAT IS A busy port and popular holiday resort nestling in southern Israel on the northern tip of the Red Sea. You would be forgiven for conjuring up images of paradise. In my view, it’s not quite like that. Indeed, architecturally it’s a bit of a mess, riddled with unsightly hotels that would not look out of place in Las Vegas. But what it lacks in architectural beauty, it more than makes up for in its birding brilliance. Among the world birding fraternity, Israel has long been known as being a bucket list location you need to find yourself in during spring to witness the legendary movements of raptors and falls of passerines. Eilat is the gateway for millions of migrant birds en route to Europe and western Asia in the spring and Africa during the autumn. Despite the less than eye-catching urban areas, Eilat is surrounded by great natural beauty. The whole of the eastern field of view is dominated by the truly epic Edom Mountains in nearby Jordan and to the north and west before you reach Egypt are the Eilat Mountains, the main site for the raptor counts, and the southern Negev Desert. Many people come to the region to explore

represents the entire world population of this latter species. Add to that the significant numbers of such globally threatened species as Turtle Dove, Egyptian Vulture, Eastern Imperial and Greater Spotted Eagles and it is easy to gauge the region’s international importance. Among the more urban hotspots within Eilat is Central Park, situated near to the city’s airport. Topographically, it is nothing like its Manhattan namesake. It is small, has no standing water and it isn’t particularly picturesque. But don’t be put off by appearances, because a treasure trove of birds have been discovered here, including Western Palearctic rarities like the Black Bush Robin in spring 2016. A quick hour here should result in Eastern Olivaceous and Eastern Bonelli’s Warblers, Wryneck, masses of Lesser Whitethroat and Yellow Wagtails of several races. Ofira Park, near the North Beach Hotel, is also worth a poke around. Like Central Park, it is within easy walking distance of most of the main hotels. The park is reputed to be the best place in the city to catch up with migrant Wrynecks that can sometimes even be seen venturing in full view onto the concrete paths. Because this park is not as popular with dog walkers as some of the others in Eilat means that it is a magnet for passing Yellow Wagtail, and Red-throated and Tree Pipits. It is a good spot for migrant warblers and the delightful Masked Shrike. Early morning or late in the day is the time to get yourself down onto North Beach to stare into the head of the Red Sea. While bemused holidaymakers look on, you can look for Sandwich and Caspian Terns and a sole Brown Booby that always seems to be around. Gulls are also well represented here with Baltic, Armenian, Heuglin’s, Slender-billed, Black-headed and White-eyed Gulls all possible. Finally, no visit to Eilat would be complete without a trip to the International Birdwatching and Research Centre Eilat (IBRCE) – it’s part park and part migrant research and ringing centre.

KEY SPECIES STEPPE BUZZARD The beautiful Steppe Buzzard is perhaps the default migrant raptor in Israel, particularly during early spring. Wintering in sub-Saharan Africa, India and also in southeastern Asia, it spends its summers in the coniferous or mixed forests of eastern and northeastern Europe eastward to the Far East. Seen by most authorities as a subspecies of our familiar Buzzard it is quite a distinctive bird. Smaller, with a longer tail and narrower more pointed wings, it tends to be a rustier looking bird. Once you get used to them you will notice that their wing beats are quicker paced than that of the more ponderous Buzzard. There have been a few reported from our shores over the years but they remain an extreme rarity and are a minefield for the unwary as care must be taken when trying to separate them from the varied plumages of the nominate race. The sheer number of birds that pass through Eilat every year is a sight to be seen.