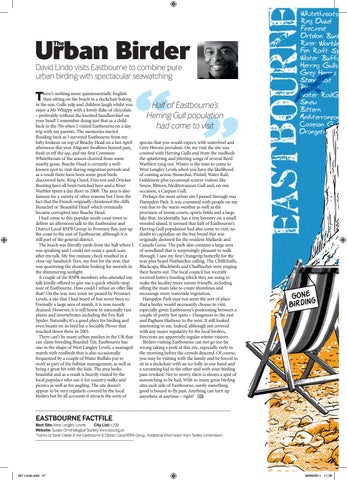 here’s nothing more quintessentially English than sitting on the beach in a deckchair baking in the sun. Gulls yelp and children laugh whilst you enjoy a Mr Whippy with a lovely flake of chocolate – preferably without the knotted handkerchief on your head! I remember doing just that as a child back in the 70s when I visited Eastbourne on a day trip with my parents. The memories started flooding back as I surveyed Eastbourne from my lofty lookout on top of Beachy Head on a hot April afternoon this year. Migrant Swallows buzzed past, fresh in off the sea, and my first Common Whitethroats of the season churred from some nearby gorse. Beachy Head is certainly a wellknown spot to visit during migration periods and as a result there have been some great birds discovered here. Ring Ouzel, Firecrest and Ortolan Bunting have all been twitched here and a River Warbler spent a day there in 2008. The area is also famous for a variety of other reasons but I love the fact that the French originally christened the cliffs Beauchef or ‘Beautiful Head’ which eventually became corrupted into Beachy Head. I had come to this popular south coast town to deliver an afternoon talk to the Eastbourne and District Local RSPB Group in Pevensey Bay, just up the coast to the east of Eastbourne, although it is still part of the general district. The beach was literally yards from the hall where I was speaking and I could not resist a quick scan after my talk. My five-minute check resulted in a close-up Sandwich Tern, my first for the year, that was quartering the shoreline looking for morsels in the shimmering sunlight. A couple of the RSPB members who attended my talk kindly offered to give me a quick whistle-stop tour of Eastbourne. How could I refuse an offer like that? On the way into town we passed by Pevensey Levels, a site that I had heard of but never been to. Formally a large area of marsh, it is now mostly drained. However, it is still home to nationally rare plants and invertebrates including the Fen Raft Spider. Naturally, it’s a good place for birding and even boasts on its bird list a Sociable Plover that touched down there in 2001. There can’t be many urban patches in the UK that can claim breeding Bearded Tits. Eastbourne has one in the shape of West Langley Levels, a managed marsh with reedbeds that is also occasionally frequented by a couple of Water Buffalo put to work as part of the habitat management, as well as being a great hit with the kids. The area looks beautiful and as a result is heavily visited by the local populace who use it for country walks and picnics as well as for angling. The site doesn’t appear to be very regularly covered by the local birders but by all accounts it attracts the sorts of

Half of Eastbourne’s Herring Gull population had come to visit species that you would expect, with waterfowl and Grey Herons prevalent. On my visit the site was covered with Herring Gulls and from the reedbeds the spluttering and jittering songs of several Reed Warblers rang out. Winter is the time to come to West Langley Levels when you have the likelihood of coming across Stonechat, Pintail, Water Rail, Goldeneye plus occasional scarcer visitors like Smew, Bittern, Mediterranean Gull and, on one occasion, a Caspian Gull. Perhaps the most urban site I passed through was Hampden Park. It was crammed with people on my visit due to the warm weather as well as the provision of tennis courts, sports fields and a large lake that, incidentally, has a tiny heronry on a small wooded island. It seemed that half of Eastbourne’s Herring Gull population had also come to visit, no doubt to capitalize on the free bread that was originally destined for the resident Mallards and Canada Geese. The park also contains a large area of woodland that is surprisingly pleasant to walk through. I saw my first Orangetip butterfly for the year plus heard Nuthatches calling. The Chiffchaffs, Blackcaps, Blackbirds and Chaffinches were singing their hearts out. The local council has recently received lottery funding which they are using to make the locality more nature friendly, including silting the main lake to create shorelines and encourage more waterside vegetation. Hampden Park may not seem the sort of place that a birder would necessarily choose to visit, especially given Eastbourne’s positioning between a couple of pretty hot spots – Dungeness to the east and Pagham Harbour to the west. It still looked interesting to me. Indeed, although not covered with any major regularity by the local birders, Firecrests are apparently regular winter visitors. Birders visiting Eastbourne can not go too far wrong taking a peek at this site, especially early in the morning before the crowds descend. Of course, you may be visiting with the family and be forced to sit in a deckchair with an ice-lolly in one hand and a screaming kid in the other and with your birding pass revoked. Not to worry, there is always a spot of seawatching to be had. With so many great birding sites each side of Eastbourne, surely something good is bound to fly past. Anything can turn up anywhere at anytime – right?