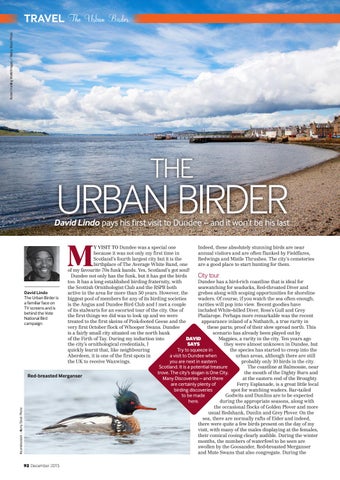 Y VISIT TO Dundee was a special one Indeed, these absolutely stunning birds are near because it was not only my first time in annual visitors and are often flanked by Fieldfares, Scotland’s fourth largest city but it is the Redwings and Mistle Thrushes. The city’s cemeteries birthplace of The Average White Band, one are a good place to start hunting for them. of my favourite 70s funk bands. Yes, Scotland’s got soul! Dundee not only has the funk, but it has got the birds City tour too. It has a long established birding fraternity, with Dundee has a bird-rich coastline that is ideal for the Scottish Ornithologist Club and the RSPB both seawatching for seaducks, Red-throated Diver and David Lindo active in the area for more than 50 years. However, the grebes along with scoping opportunities for shoreline The Urban Birder is biggest pool of members for any of its birding societies waders. Of course, if you watch the sea often enough, a familiar face on is the Angus and Dundee Bird Club and I met a couple rarities will pop into view. Recent goodies have TV screens and is of its stalwarts for an escorted tour of the city. One of included White-billed Diver, Ross’s Gull and Grey behind the Vote the first things we did was to look up and we were Phalarope. Perhaps more remarkable was the recent National Bird treated to the first skeins of Pink-footed Geese and the appearance inland of a Nuthatch, a true rarity in campaign very first October flock of Whooper Swans. Dundee these parts; proof of their slow spread north. This is a fairly small city situated on the north bank scenario has already been played out by of the Firth of Tay. During my induction into DAVID Magpies, a rarity in the city. Ten years ago the city’s ornithological credentials, I SAYS they were almost unknown in Dundee, but quickly learnt that, like neighbouring Try to squeeze in the species has started to creep into the Aberdeen, it is one of the first spots in a visit to Dundee when urban areas, although there are still the UK to receive Waxwings. you are next in eastern probably only 10 birds in the city. Scotland. It is a potential treasure The coastline at Balmossie, near trove. The city’s slogan is One City, the mouth of the Dighty Burn and Red-breasted Merganser Many Discoveries – and there at the eastern end of the Broughty are certainly plenty of Ferry Esplanade, is a great little local birding discoveries spot for watching waders. Bar-tailed to be made Godwits and Dunlins are to be expected here. during the appropriate seasons, along with the occasional flocks of Golden Plover and more usual Redshank, Dunlin and Grey Plover. On the sea, there are normally rafts of Eider and indeed, there were quite a few birds present on the day of my visit, with many of the males displaying at the females, their comical cooing clearly audible. During the winter months, the numbers of waterfowl to be seen are swollen by the Goosander, Red-breasted Merganser and Mute Swans that also congregate. During the 92 December 2015

DAVID SAYS Keep sifting through the flocks of Eider that you come across. There may be a King Eider hidden in amongst them or better still, you could discover Britain’s first Spectacled Eider and become a national hero!

migration periods it is a good idea to scan the beach for migrants such as Wheatear and the trees surrounding the nearby train station for warblers. One of my favourite urban birding areas in the city was at Dundee Law. It is a hill that is a prominent feature in the centre of the city that, believe it or not, is an extinct volcano. It was the perfect substitute for a tall building, as it afforded a 360° panoramic view of the city including the River Tay and towards Perth. Exactly what you need for observing visible migration. Just before Perth is an expansive reedbed that stretches for more than 10 miles along the north side of the River Tay. Incredibly, it is home to one of the largest populations of Bearded Tits in Britain, with in excess of 100 birds present. This astounded me, as I was ignorant of the fact that this attractive and unique songbird was found anywhere north of Lancashire. Tay Reedbeds is also a good place for finding Water Rail and has recently been colonized by Reed Warblers, although they are still quite scarce. Bittern are suspected of wintering here although you will have much better luck locating the breeding Sedge Warblers and the masses of Reed Buntings. In 2013, seven pairs of Marsh Harrier were present of which five pairs bred raising 14 youngsters. Dundee surprised me. It is an urban birding venue that has yet to reveal all its secrets.

Perhaps most famous to the general public for being the provider of super soft eiderdown (from the females), Eider is a highly recognisable seaduck, visible from most of our coastlines during the winter. They are especially a feature of the more northerly British coasts where the bulk of our breeding birds are to be found. Eiders are arctic birds and can be found around the northern coasts of Europe, North America and eastern Siberia. Our bird is one of four species. The King Eider appears annually here in tiny numbers usually during the winter, the Steller’s Eider is a mega rarity while the Spectacled Eider is yet to be discovered in our waters. The Eider is a remarkable bird. It’s the largest duck in Europe, and despite its squat, heavyset appearance, it can attain speeds of up to 70mph in flight. It feeds by diving after crustaceans and molluscs. It swallows the molluscs whole and the shells are crushed in their gizzard before being excreted. Despite being seabirds, keep an eye out for them on your local patch, as they sometimes turn up on reservoirs far inland during the winter. Eider