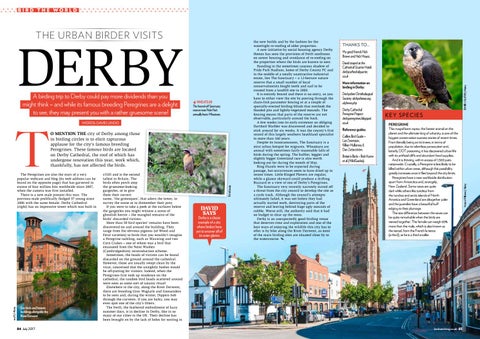 A birding trip to Derby could pay more dividends than you might think – and while its famous breeding Peregrines are a delight to see, they may present you with a rather gruesome scene! WORDS: DAVID LINDO

O MENTION THE city of Derby among those in birding circles is to elicit rapturous applause for the city’s famous breeding Peregrines. These famous birds are located on Derby Cathedral, the roof of which has undergone renovation this year, work which, thankfully, has not affected the birds.

The Peregrines are also the stars of a very popular webcam and blog (its web address can be found on the opposite page) that has garnered in excess of four million hits worldwide since 2007, when the camera was first installed. There is a new male present this year. The previous male prolifically fledged 37 young since 2006 with the same female. Derby Cathedral (right) has an impressive tower which was built in

c1535 and is the second tallest in Britain. The birds often perch atop the gruesome-looking gargoyles, or to give them their correct name, ‘the grotesques’, that adorn the tower, to survey the scene or to dismember their prey. If you were to take a peek at the surfaces below the gargoyles you might witness a scene of ghoulish horror – the mangled remains of the birds’ discarded victims. More than 50 bird species’ remains have been discovered on and around the building. They range from the obvious pigeons (of Wood and Feral varieties) to birds that you wouldn’t imagine a Peregrine tackling, such as Waxwing and two Corn Crakes – one of whom was a bird that emanated from the Nene Washes (Cambridgeshire) reintroduction scheme. Sometimes, the heads of victims can be found discarded on the ground around the cathedral. However, these are usually swept clean by the vicar, concerned that the unsightly bodies would be off-putting for visitors. Indeed, when the Peregrines first took up residence on the cathedral, the random bird heads scattered around were seen as some sort of satanic ritual! Elsewhere in the city, along the River Derwent, there are breeding Grey Wagtails and Goosanders to be seen and, during the winter, Dippers bob through the currents. If you are lucky, you may even spot one of the city’s Otters. The Swift, the feathered embodiment of hazy summer days, is in decline in Derby, like in so many of our cities in the UK. Their decline has been brought on by the lack of holes for nesting in

THANKS TO... My good friends Nick Brown and Nick Moyes. David stayed at the Cathedral Quarter Hotel: derbycathedralquarter. co.uk More information on birding in Derby:

the new builds and by the fashion for the watertight re-roofing of older properties. A new initiative by social housing agency Derby Homes has seen the provision of Swift nestboxes on newer housing and avoidance of re-roofing on the properties where the birds are known to nest. Standing in the sometimes raucous shadow of Pride Park Stadium, home of Derby County FC and in the middle of a totally unattractive industrial estate, lies The Sanctuary – a 12-hectare nature reserve that a small number of local conservationists fought tooth and nail to be created from a landfill site in 2003. It is entirely fenced and there is no entry, so you have to either view the site by peering through the chain-link parameter fencing or at a couple of specially-erected birding blinds that overlook the flooded pits and lightly-vegetated mounds. The fencing means that parts of the reserve are not observable, particularly around the back. A few weeks into its early existence an obliging Dartford Warbler was discovered and decided to stick around for six weeks. It was the county’s first record of this largely southern heathland specialist in more than 160 years. Despite its innocuousness, The Sanctuary is a mini urban hotspot for migrants. Wheatears are annual with sometimes fairly reasonable falls of birds during the spring. The buffier, leggier and slightly bigger Greenland race is also worth looking out for during the month of May. Ring Ouzels were to be expected during passage, but occurrences seem to have dried up in recent times. Little Ringed Plovers are regular, while a glance skyward could produce a drifting Buzzard or a view of one of Derby’s Peregrines. The Sanctuary very recently narrowly staved off a threat from the city council to develop the site as a cycle track. Although the council’s attempts ultimately failed, it was not before they had actually started work, destroying parts of the reserve and leaving behind huge ugly mounds of rubble. Worse still, the authority said that it had no budget to clear up the mess. Derby is an unexpectedly good birding venue that deserves time and exploration and one of the best ways of enjoying the wildlife this city has to offer is by bike along the River Derwent, as most of the main birding sites are situated close by to the watercourse.

KE Y SPECI ES PEREGRINE This magnificent raptor, the fastest animal on the planet and the ultimate king of urbanity, is one of the biggest conservation success stories of recent times. From literally being on its knees, in terms of population, due to relentless persecution and, latterly, DDT poisoning, it has discovered urban life with its artificial cliffs and abundant food supplies. And it is thriving, with in excess of 1,500 pairs nationwide. Crucially, a Peregrine is less likely to be killed within urban areas, although this possibility greatly increases once it flies beyond the city limits. Peregrines have a near worldwide distribution apart from Antarctica and, strangely, New Zealand. Some races are quite dark while others like tundrius from the tundras and arctic islands of North America and Greenland are altogether paler and the juveniles have a beautiful buff edging to their plumage. The size difference between the sexes can be quite remarkable when the birds are viewed together. The female can weigh 60% more than the male, which is also known as the tiercel, from the French la tierce (a third), as he is a third smaller.