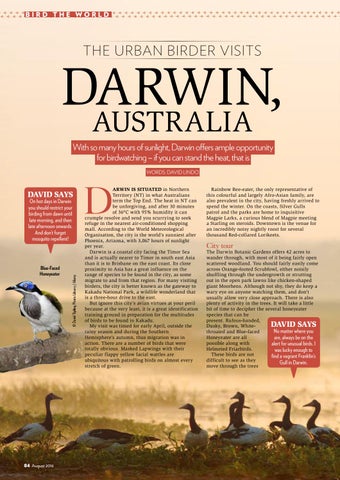 DARWIN, AUSTRALIA With so many hours of sunlight, Darwin offers ample opportunity for birdwatching – if you can stand the heat, that is WORDS: DAVID LINDO

On hot days in Darwin you should restrict your birding from dawn until late morning, and then late afternoon onwards. And don’t forget mosquito repellent!

ARWIN IS SITUATED in Northern Territory (NT) in what Australians term the Top End. The heat in NT can be unforgiving, and after 30 minutes of 36°C with 95% humidity it can crumple resolve and send you scurrying to seek refuge in the nearest air-conditioned shopping mall. According to the World Meteorological Organisation, the city is the world’s sunniest after Phoenix, Arizona, with 3,067 hours of sunlight per year. Darwin is a coastal city facing the Timor Sea and is actually nearer to Timor in south east Asia than it is to Brisbane on the east coast. Its close proximity to Asia has a great influence on the range of species to be found in the city, as some migrate to and from that region. For many visiting birders, the city is better known as the gateway to Kakadu National Park, a wildlife wonderland that is a three-hour drive to the east. But ignore this city’s avian virtues at your peril because at the very least, it is a great identification training ground in preparation for the multitudes of birds to be found in Kakadu. My visit was timed for early April, outside the rainy season and during the Southern Hemisphere’s autumn, thus migration was in action. There are a number of birds that were totally obvious. Masked Lapwings with their peculiar flappy yellow facial wattles are ubiquitous with patrolling birds on almost every stretch of green.

Rainbow Bee-eater, the only representative of this colourful and largely Afro-Asian family, are also prevalent in the city, having freshly arrived to spend the winter. On the coasts, Silver Gulls patrol and the parks are home to inquisitive Magpie Larks, a curious blend of Magpie meeting a Starling on steroids. Downtown is the venue for an incredibly noisy nightly roost for several thousand Red-collared Lorikeets.

The Darwin Botanic Gardens offers 42 acres to wander through, with most of it being fairly open scattered woodland. You should fairly easily come across Orange-footed Scrubfowl, either noisily shuffling through the undergrowth or strutting out in the open park lawns like chicken-shaped giant Moorhens. Although not shy, they do keep a wary eye on anyone watching them, and don’t usually allow very close approach. There is also plenty of activity in the trees. It will take a little bit of time to decipher the several honeyeater species that can be present. Rufous-banded, Dusky, Brown, WhiteNo matter where you throated and Blue-faced Honeyeater are all are, always be on the possible along with alert for unusual birds. I Helmeted Friarbirds. was lucky enough to These birds are not find a vagrant Franklin’s difficult to see as they Gull in Darwin. move through the trees

ORANGE-FOOTED SCRUBFOWL The Orange-footed Scrubfowl belongs to the megapode family, a unique group of birds. Also known as incubator birds or mound builders, they create mounds of decaying vegetation in which they bury their eggs to be incubated. The male guards the mound, removing or adding the leaf litter to regulate the incubating temperature. When the chicks hatch, they are remarkable in that they are born fully feathered and able to fly. They emerge from the mound fully independent of their parents. The Orange-footed Scrubfowl is one of about 20 species that range from the broader Australasian region to the Andaman and Nicobar Islands in the Bay of Bengal. It is about the size of a guineafowl, with a pointed crest that gives its head a wedge-shaped look. They are omnivores, feeding on seeds, berries and roots as well as invertebrates and even young snakes. It is a well-known bird in Darwin and you should have no problem adding this species to your Darwin list!

in small waves of mixed species. Forever foraging in the foliage, they range in size from a slim thrush in the case of the Helmeted Friarbird, to some of the warbler-sized honeyeaters. Garnishing some of the bare branches are the electric blue-and-white Forest Kingfishers. It is also worth looking out for Shining Flycatcher and White-bellied Cuckoo Shrike. The tropical forest area of the Botanic Gardens hosted a gorgeous Pied Imperial Pigeon. The most surprising find on my visit was a pair of Rufous Owls. A visit to the coastal East Point Reserve could provide you with the possibility of a passing seabird, like Lesser Frigatebird or Brown Booby. During my visit, hordes of Whiskered and White-winged Black Terns were busy mid-way out to sea, picking off food items from the water’s surface. Caspian, Gull-billed, Crested and Lesser Crested Terns are all also possible. Waders are a feature all along the shoreline, and can include species such as Grey-tailed Tattler, the extremely long-billed Far Eastern Curlew and Red-capped Plover.